Move Inc.’s Realtor.com was unchallenged in the top spot, with a 6.97 percent market share of all visits to real estate-related Web sites. The sites are ranked based on share of visits from a total Hitwise sample of 10 million U.S. Internet users.

Foreclosure-related site ForeclosureStore.com has risen from 96th in the rankings in November to 27th in December, 17th in January and 12th in February. 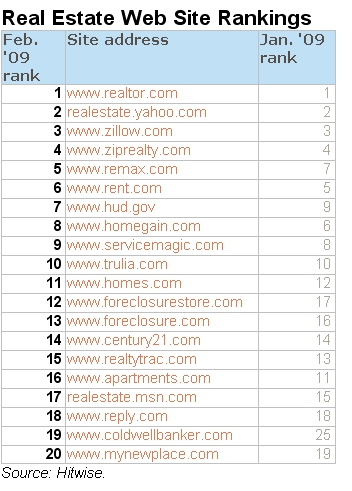 During a four-week period ending Feb. 28, "Realtor.com" ranked as the most popular search term that sent traffic to a real estate category Web site. Among the other popular terms: "remax," "zillow," real estate," "zillow.com," "homes for sale," "realtor," "century 21," "remax.com homes for sale" and "coldwell banker."

Fast-moving Web sites, which Hitwise identifies as those with substantial increases in ranking for the four-month period ending in February, include vivante-fl.com (up 813 places to 1,437th), AlpineResortProperties.com (up 786 places to 1,954th), and NaplesArea.com (up 545 places to 752nd).