Fast-forward to May 2010, and an estimated 25 percent of transactions were in cash. That’s a jump from 12 percent in May 2009. From January through April, cash buyers’ share of transactions hovered at 26 or 27 percent, according to the NAR survey.

Many are investors — people seeking to buy a property for rental income, or "fix-and-flip" buyers who seek to make quick fixes to the property and resell it within a short period of time. According to NAR, investors made up 14 percent of buyers nationally in May.

In areas with a high number of distressed properties, cash buyers’ share of the market can exceed 40 percent.

"Of course, everyone with cash is hoping to play ‘let’s make a deal’ because they are bringing cash to the table. However, with over 40 percent of our closings being cash transactions, they don’t always have the leverage they expect because they are very likely competing with other cash buyers."

Sellers often prefer to deal with cash buyers for several reasons. The home being sold could be in a condition unlikely to qualify for financing — it may need major repairs or be involved in litigation, for example.

Also, the deals are more likely to close — and faster — if mortgage lender requirements and appraisals are not an issue. Cash buyers are also a welcome sight for developers who need to have a minimum percentage of units in contract before any of the units can qualify for conventional and FHA financing.

Cash buyers themselves also benefit from a faster close and don’t have to pay lender fees. Because of the benefits to sellers, cash buyers are often in a better position to buy investment properties.

"Quite a number of investors have been sitting on cash — some pulled their money out of the stock market when they had the chance — and buying up a lot of properties under $100,000 to drive themselves a very good positive cash flow," Barbee said.

He described the investment opportunities in the Las Vegas area in this way:

"An investor with $180,000 to spend could purchase one single-family home at an exceptional price and rent it for, say, $1,200 per month. However, they could also pick up three condos near the strip at $60,000 each, with rental income potential of $900 per month each. Many of these condos can be purchased only with cash due to litigation or other reasons.

Cash buyers often get discounts on the properties they’re buying, though as Barbee noted the size of that discount can vary depending on market conditions.

In the New York City market, for example, about 20 percent of all sales are to cash buyers. Some of those buyers think they’ll get a discount of as much as 20 percent because they’re paying in cash, according to CitiHabitats sales manager Sara Rotter.

Instead, "it’s fair to say (they’ll get) maybe 2 to 8 percent off of the asking price, with 8 percent being on the generous side," she said. She advised real estate agents and brokers to manage buyer expectations accordingly.

How much a property is discounted also depends on whether or not it is a distressed property. Ron Strehlow, a cash buyer in the Denver metro area, buys only short sale or foreclosure properties in order to fix and flip them. He buys about 10 a year.

"There needs to be a 30 percent to 40 percent discount from retail price," he said. "The properties I look at would only be purchased by investors. They’re extreme fixer-uppers. Properties that banks generally won’t loan on because the kitchen often isn’t complete, things like that."

Inventory also plays a role, since homes in certain price points may attract multiple bids. In the New York City market, primary-home buyers outnumber investors, Rotter said, so purchasing is more evenly spread among price points as families buy according to their needs.

In the Denver market, however, homes under $150,000 are especially sought-after by investors for their flip potential, according to Andrea Altieri of Candlewood Realty, the brokerage Strehlow works with.

"All of my cash buyers are investors," Altieri said. "We have less than a month’s inventory of anything less than $100,000. The competition for those properties is fierce, and multiple offers, with highest and best final bids, are the order of the day."

Real estate professionals Inman News contacted most commonly cited past clients, referrals and website traffic as the main sources of their cash-buyer clients.

"Cash buyers can carry a lot of leverage, especially in today’s market, and because of this are looking for solutions that are more advantageous," said Sherwin Sucaldito, an agent for Chicago brokerage @properties.

"Cash buyers can be time-conscious, not specifically just the time frame to purchase, but in communication, follow-up and action. Some cash buyers have the ability to close within days, something that some sellers are not able to accommodate.

"Doing preliminary research and understanding your client’s needs and how they fit with potential properties, (homeowners associations) and sellers can save time and avoid wasted effort," Sucaldito said.

It is the role of the agent to explain advantages and disadvantages involved in cash transactions, Rotter said. One potential disadvantage is that cash buyers can’t deduct mortgage interest on their tax returns.

"It depends on the buyer’s financial situation, but sometimes it helps to have the write-off," she said. Another disadvantage is that the buyer ties up a substantial amount of money in an asset (a home) that cannot be converted into cash very quickly.

"Paying all cash, the person might not be left very liquid. Mortgage rates are at historical lows and buyers can invest that liquidity in other areas" if they take on a loan to buy a home instead, Rotter said.

Because some buyers who submit cash offers attempt to switch to a financed transaction later, some banks have also gotten more stringent in their demands for proof of funds, Barbee said.

"Banks no longer accept a mere letter, even on bank letterhead, stating that the client has cash assets; they are looking for an actual account statement that explicitly demonstrates that seasoned cash funds are available for the purchase," he said.

Almost half, 46 percent, of foreign buyers paid in cash between May 2008 and May 2009, according to NAR’s 2009 Profile of International Home Buying Activity, based on a survey. After personal reasons, the inability to obtain financing ranked as the No. 1 reason foreigners elected not to buy in the U.S.

But "the process of legally moving large amounts of cash into the U.S. from other countries is evidently fairly straightforward and problem-free, even with the background red tape of documentation and compliance," said Steve Wiley, owner of Smarter Choice Real Estate in Lincoln, Neb.

"I had one client who did this from Turkey," he said, adding that cash buyers in his market are either cash-rich farmers or people relocating from outside the U.S.

Favorable exchange rates have encouraged foreigners to buy in the U.S. According to both anecdotal evidence from real estate professionals and stats kept by NAR, Canadians tend to predominate among foreign buyers. Canadians accounted for 18 percent of transactions involving foreign buyers in 2009, the largest share among all nations.

"Canada has a really strong dollar right now," said Evan Sage, a sales agent in Toronto. A couple of his clients have bought investment property in the U.S. recently.

"Florida, South Carolina, California, Arizona are easy to travel to for winter getaways. Our interest rates are still very low, so (buyers) can borrow for other investments and we all have faith that the hard-hit areas in the U.S. will rebound sooner than later."

From January 2009 through April 2010, cash purchases — indicated by a sale where no corresponding purchase loan was recorded — made up at least a quarter of California’s transactions, hitting a peak of 30 percent in January and February 2010.

That’s according to real estate information company MDA DataQuick, which cautions that on some of those purchases the buyers might have used a nontraditional form of financing or put a mortgage on the property later. During the same period, FHA -insured home loans made up between 36 and 39 percent of transactions.

Not every multiple listing service keeps track of whether a transaction is paid for through cash or financing. Among those that do, buyers are typically most likely to purchase through conventional loans, FHA-insured loans or cash, in that order.

In some areas, however, cash transactions outnumber those with FHA financing — and even outnumber conventional loans. According to the Arizona Regional MLS (which covers the Phoenix metro area), cash buyers accounted for 41 percent of purchases from January through May.

Metropolitan Regional Information Systems Inc. (MRIS), the largest MLS in the nation, covers the Mid-Atlantic region, including parts of Maryland, Northern Virginia, Pennsylvania, West Virginia and Washington, D.C. Cash buyers made up about 16 percent of sales overall in May, while conventional sales made up 43 percent of sales and FHA sales made up 42 percent.

Sales overall rose by 20 percent in May compared to May 2009, though FHA and cash buyers rose faster (by 24 percent each) than those with conventional loans (17 percent). 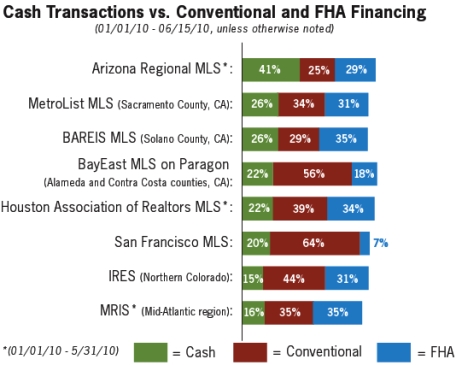 For a more in-depth look at cash buyer and financing statistics for some specific MLSs, please see the following: