The trade group blamed much of the problem on a decline in "for sale by owner" sales — properties not represented by real estate brokers and therefore not listed in an MLS.

NAR said consumer survey data show FSBOs accounted for 9 percent of sales in 2010, down from 16 percent in 2000.

"Some property listings on more than one MLS, and issues related to house flipping, also contributed to the downward revisions." 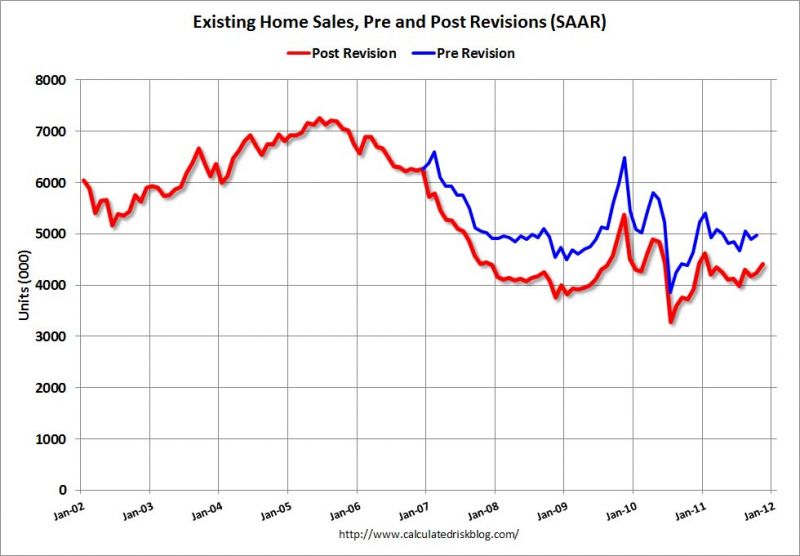 Although rebenchmarking will also be done at the state level, data reported by local MLSs and Realtor associations is still valid, because those numbers are published before they are adjusted.

The need to rebenchmark NAR’s existing-home sales statistics is generating national headlines that could damage the trade group’s credibility.

Anticipating NAR’s revisions, the Greater Tulsa Association of Realtors in Oklahoma last week issued a press release reassuring consumers that "the newly revised national data has no impact for local homebuyers" and that "rates are (the) lowest in history and it’s still a great time to buy in Tulsa."

Phoenix-based broker Jay Thompson said that so far his clients haven’t voiced any concerns about NAR’s need to revise its existing-home sales statistics.

"I think within the real state industry we’re probably more concerned about it, and certainly more aware of it, than consumers are," Thompson said.

The MLS numbers "are good and solid," he said, and his clients put more faith in the MLS-based local market reports he provides them with rather than media reports on national sales figures.

"The mainstream media tends to blow these things out of proportion," Thompson said. "I have no evidence that buyers and sellers pay any attention to the numbers that come out of NAR. They see the headlines but it never comes up in conversation."

NAR’s national statistics are important to economists, policymakers and others who make decisions based on macro-level data including national home sales.

The benchmark revisions, for example, will require the U.S. Bureau of Economic Analysis to make a small downward adjustment to its estimates of national gross domestic product (GDP). That’s because the bureau relies on NAR’s existing-home sales figures to estimate real estate brokers’ commissions on the sale of residential structures, most recently pegged at $55.5 billion a year, down from a peak of $109.9 billion in 2005.

If that figure were adjusted downward by 14 percent, the $7 billion reduction would have only a slight effect on the U.S.’s $15 trillion GDP. Brokers would not be affected because they collect actual, rather than estimated, commissions.

NAR said that in the process of rebenchmarking, it consulted with the Federal Reserve Board, the Department of Housing and Urban Development, Freddie Mac, Fannie Mae, the Mortgage Bankers Association, the National Association of Home Builders, CoreLogic, and individual economists.

The latest, rebenchmarked data from NAR shows existing-home sales increasing by 4 percent from October to November, to a seasonally adjusted annual rate of 4.42 million homes — a 12.2 percent increase from a year ago, when homes were selling at a pace of 3.94 million units a year.

Housing inventory was down 5.8 percent from October to 2.58 million existing homes for sale, a seven-month supply at the current sales pace. Inventories peaked at a record 4.04 million in July 2007, NAR said, citing the rebenchmarked figures.

The national median existing-home price was $164,200 in November, down 3.5 percent from a year ago.

Distressed homes, including short sales and homes repossessed by lenders, accounted for 29 percent of sales in November, down from 33 percent a year ago. NAR said 19 percent of home sales were lender-owned properties and 10 percent were short sales.

All-cash sales — mostly to investors — accounted for 28 percent of existing-home sales, down from 29 percent in October and 31 percent at the same time a year ago.

First-time buyers accounted for 35 percent of existing-home sales, up from 34 percent in October and 32 percent in November 2010.