Can you explain why it’s smarter for a potential home seller to list with you, a real estate agent, as opposed to attempting a for-sale-by-owner (FSBO) deal? Showing the FSBO the value you bring to the transaction may be much easier than you realize.

Many real estate experts thought the Internet would result in more people being able to successfully sell their home without a real estate agent.

The exact opposite has happened. According to research from the National Association of Realtors’ latest Profile of Home Buyers and Sellers, FSBOs accounted for 10 percent of sales in 2011, down from 14 percent in 2003 and 2004.

Nearly half of FSBO sales were intrafamily transfers or other situations where the sellers already knew the buyers. Only 6 percent of 2011 sales were FSBO transactions in which the seller did not know the buyer. 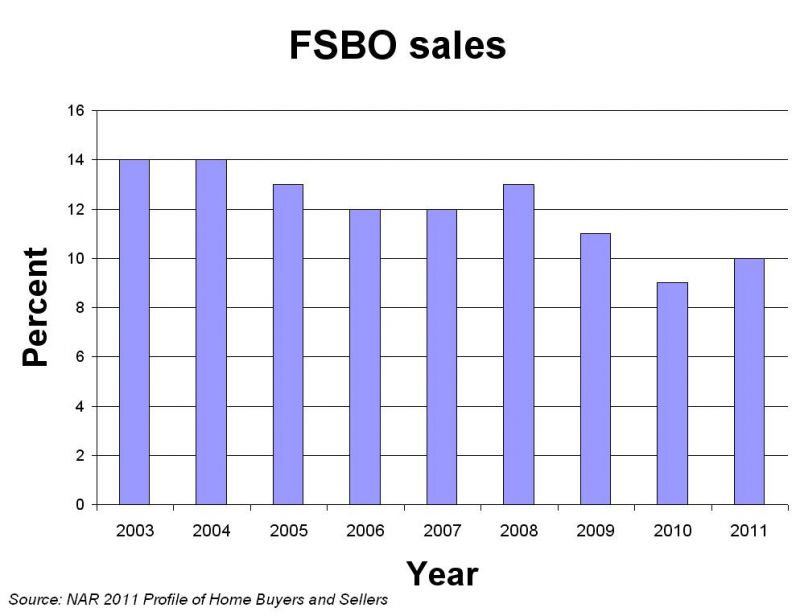 Here are some of the key factors that deter most homeowners from selling without an agent.

1. The decline of print advertising as a major lead generator
In the past, newspaper ads would produce a fair number of calls on FSBOs. Today, a three-line ad in the local newspaper has little chance of competing with the wide array of information online, including video, color photos, 360-degree virtual tours, and a wealth of community and lifestyle data.

2. Buyers seek rich content
IDX and VOW solutions, Realtor.com, Trulia and Zillow provide access to virtually all the listings in most market areas. Most buyers comb these major sites simply because it’s more efficient than searching for single properties.

3. Instant gratification
A third problem for FSBOs is that people who surf the Web usually are seeking instant gratification. In fact, most visitors will only visit a website once and stay for 15-30 seconds. If the FSBO has no strategy for capturing the lead’s contact information or for immediately following up, the lead moves on to the next website. Even if the Web lead does contact the FSBO, unless the buyer gets back to the FSBO quickly, that lead is gone.

4. Buyers want the savings
Even for those who do search for FSBOs, most buyers automatically deduct 6 percent from the sales price because they want the savings in their pockets, not the seller’s. The result is that many FSBOs end up selling for up to 20 percent less on average as compared with sellers who hire a Realtor.

5. The needle-in-the-haystack effect
A major challenge for FSBOs is the needle-in-the-haystack nature of the Web. There are millions of websites including the hundreds of thousands of company and agent sites. Without search engine optimization, meta tags and a host of other branding strategies to achieve high Web placement, the probability of the Web buyer finding the FSBO’s single listing online is small.

Of course, the buyer could post on sites such as ForSalebyOwner.com, ByOwnerMLS, or utilize the "Make Me Move" feature on Zillow. The challenge is that unless the buyer specifically wants to purchase a FSBO, it’s much more efficient to search on the brokerage or MLS sites.

The FSBO could also put his home on Craigslist. There are two challenges, however. First, the FSBO has to repost the ad regularly for it to appear near the top where it can be found. Second, there have been so many rental scams and unsavory people using that site to identify targets for possible criminal activity that listing there could be a major safety issue.

7. Availability for showings
Because FSBOs don’t have lockboxes, that means the FSBO will need to be present for every showing. There are numerous challenges with this situation, the most important of which is safety. Is the person who wants to see your house legitimate or not? Even if you accept an offer from a potential buyer, how do you know whether the person meets the income and credit requirements to close the deal?

8. The proof is in the pudding
Here’s a great closing question for sellers who believe that becoming a FSBO is a smart move. Did you know that Colby Sambrotto, founder of ForSalebyOwner.com, which is one of the most popular and robust FSBO sites on the Web, ended up listing his home with an agent AND paying a full commission?

If he couldn’t get the job done for himself using his website, how effective do you think this approach will be in getting your home sold for the highest possible price in the shortest amount of time?

The climate has never been better for prospecting FSBOs. If you haven’t considered adding this valuable niche to your business, there’s no better time than right now.