Eight new one-of-a-kind pieces of pet architecture stretch the boundaries of pet home style and prove, somewhat surprisingly, that your pooch or kitty can enhance your home’s decor as much as they do your life.

At a glance, these pet habitats — all donated by architectural firms to raise money for a San Francisco-based nonprofit, Pets Are Wonderful Support (PAWS) — reveal a clear embrace of utilitarianism and a bold, cutting-edge vogue. Not to mention some cute, at-home pets.

According to the American Pets Products Association, Americans will spend just under $53 billion on their pets this year. But some who might benefit the most from the love that a pet can provide — like fixed-income elderly and health-compromised adults — can’t afford the vet bills and the food prices. 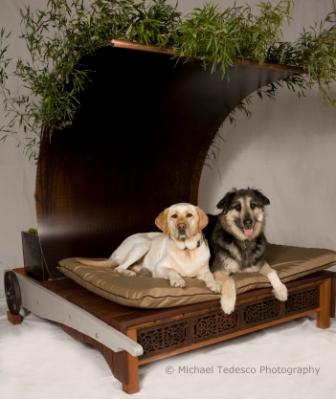 That’s where PAWS comes in. The group’s 17th annual "Petchitecture" fundraiser event on Friday, May 11, is expected to draw 800 attendees and raise more than $200,000 for the nonprofit, which helps low-income seniors and people with HIV/AIDS and other disabling illnesses care for their companion animals.

And the event’s pet architecture can give you a new perspective on what living with a pet can mean, bringing the whimsy, fun and love that characterizes pet ownership to the level of elegant design.

This year seven design firms donated eight pieces. In years past, as many as 18 architects have participated, said Cheryl Shiflett, marketing director at PAWS. Five of the eight pieces donated this year will be auctioned off at the event. The other three habitats were commissioned by donors matched by PAWS with participating designers who built habitats to fit the donors’ needs and wants.

Pugs in a Barrel 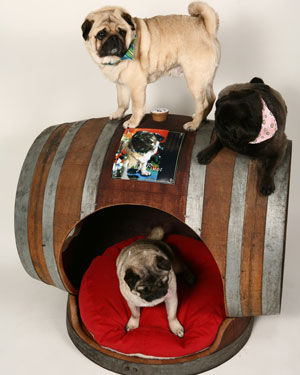 The result of one donor-designer collaboration was "Pugs in a Barrel," for Peggy Bennington, a Marin County, Calif.-based lawyer and small-volume winemaker. After Bennington saw several designs from William Duff Architects, the idea of using a wine barrel for the habitat for her three pugs emerged.

"The more you can use of the wine barrel, the better," Bennington said to the designers early in the design process. The result is a figurative "Pug Pinot" to match the literal wine of the same name she vints (two barrels) each year.

The cavernous, used wine barrel, remnants of its ambrosia bleeding through its oak body, is perfect pug property. It doesn’t take a great mental leap to see all three pugs, a breed notorious for cuddling, piled on top of each other in their new pug home.

And, if coziness wasn’t enough of a treat for those pugs, the wine stopper has been rebranded as a "treat dropper." Treats raining from the sky? Enough to make a pug’s heart soar — and an owner’s. 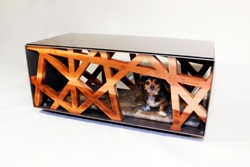 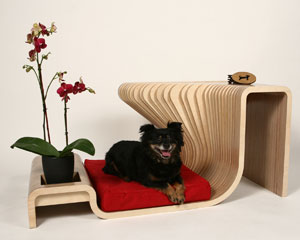 "We wanted to merge the pet and user’s needs into one functioning piece," said Joe Irwan, a designer at MBH Architects, which donated the "Pawmio" and "Pawmio-mini" to this year’s Petchitecture.

The habitats have two levels. "The lower tier is almost like a coffee table for the pet," said Irwan, "and the upper tier serves as one for the person." Small pocket inlays in both levels can hold coffee cups, vases, and water and food bowls. 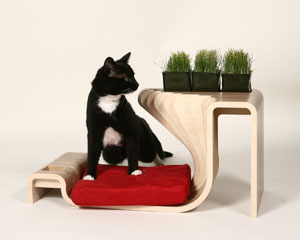 The two identical, though different-sized, pieces were built out of glued-together sheets of three-quarter-inch birch plywood. As they’re made up of individual sheets, each sheet could be bent differently, a possibility used to form the pieces’ striking wave.

"It represents a transition between user and pet," said Irwin. By stacking the plywood pieces, the flowing effect was achieved, he said. The flat tops on both sides of the wave emphasize the unity between pet and person, he added.

The wave also has a functional raison d’etre, said Irwin; it gives the pet some control over the amount of privacy it wants by being able to duck under the breaking side for quieter moments and to face the more open side for more sociable ones. 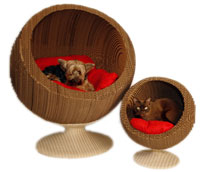 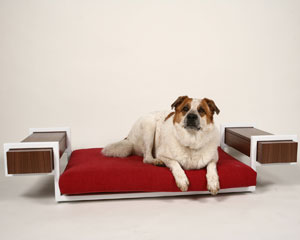 The pillow’s bright burgundy was meant to pop against the flat white of the frame and evoke Dwell Magazine’s sharp, clean aesthetic, said Pathare. Also, the choice of squared steel over tubular was chosen to echo the square, blunt lettering of Dwell’s logo.

"It’s so modern and ingenious," said Abrams, "[Pathare] nailed it." Her Australian shepherd/Queensland Heeler mix, Joey, has already taken to it, said Abrams. At a pre-showing of this year’s Petchitecture pieces at a San Francisco furniture store earlier this month, he walked straight upstairs and right to it, she said.

Abrams sees a market in this original. "If they could mass produce one of these," she said, "we’d put them for sale on Dwell!"

Huntsman Architectural Group has been a part of Petchitecture for all of its 17 years. Last year, their kitchen table piece won best in show for the patron-inspired design. Beth Feingold wanted a piece that allowed her German shepherd mix "Annie" to be comfortable at her feet in the kitchen, where she spent a lot of time admiring its great San Francisco views. So, the kitchen table, island-style, included a doggy daybed directly underneath. 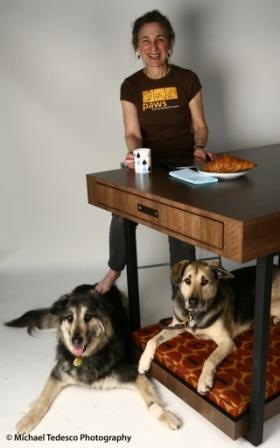 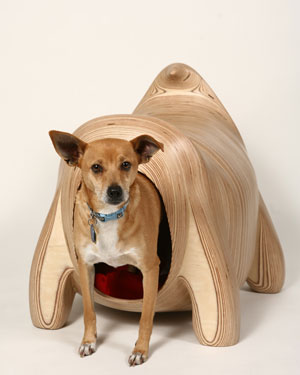 Danish furniture maker Peter Kuzma-Rodevad with his wife Linda, who both now live in the San Francisco Bay Area, designed the "Cornucopia." At the pre-Petchitecture event earlier this month, their dog, DJ Sausage, lounged in it, his arm overhanging the rim in a casual, at-home vibe. "This is mine," his look said.

It won’t be for long, though. It will be auctioned off at Friday’s Petchitecture event.

Kuzma-Rodevad, who works as a private, custom furniture maker to Bay Area clients, got inspiration for the design from a much smaller pot-bellied-pig piece he made for his mother-in-law. The piece taught him about how the wales in glued-together plywood can be manipulated to make pleasing patterns. 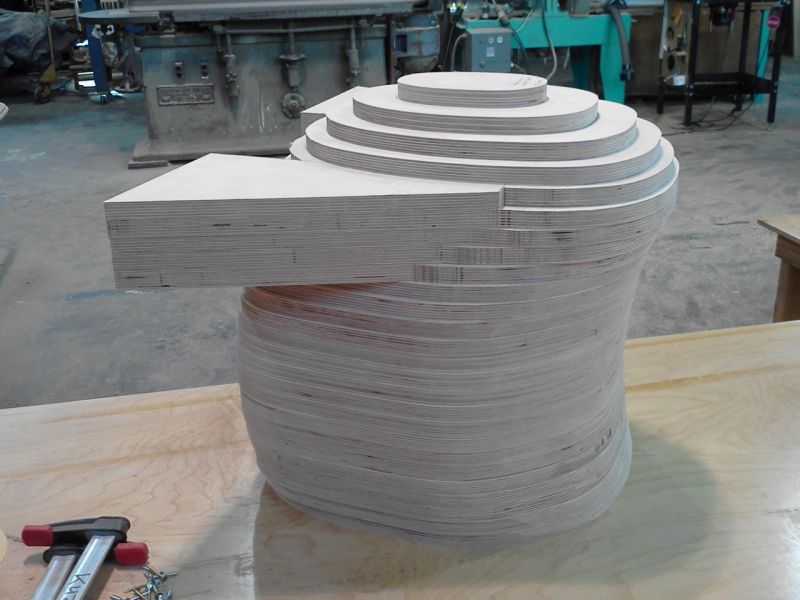 The dense-layered Lithuanian birch three-quarter-inch plywood sheets he used to create the cornucopia allows for interesting designs. Using a router to shave wood off at different angles made the layered lines appear wider and narrower, resulting in interesting patterns, he said.

Shaped like a big-bellied pooch with cornucopia tail and mouth, the piece has an overwhelmingly provident feel.

"In Nordic mythology, the cornucopia gives you whatever you want and it never runs out," Kuzma-Rodevad said. A pet’s love is similar, he said, thus the cornucopia analogy. 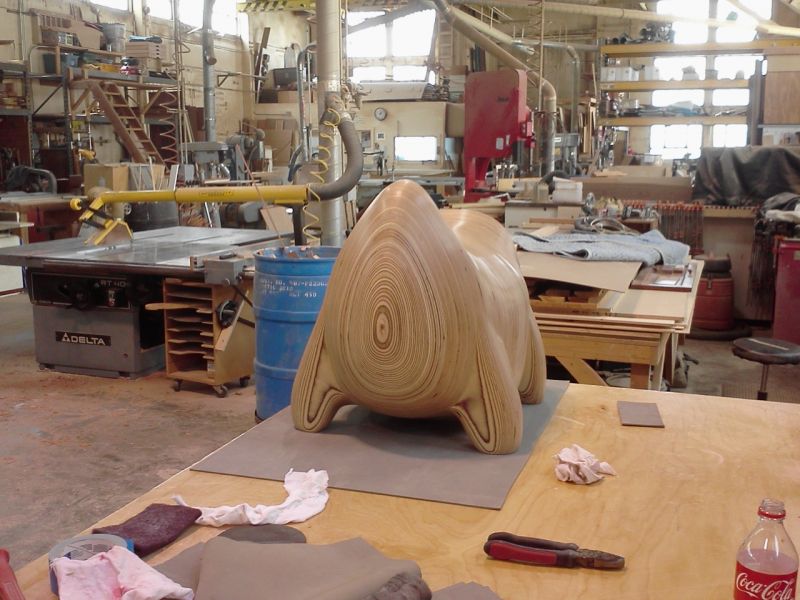 The egg-shaped tail in a flowing up-curl adds to the interesting, smooth shape of the piece, which appears to be tilting forward. That tilt is just an illusion, said Kuzma-Rodevad. But the womblike feel of the piece’s interior red color isn’t, he said.

Neither is the honor to his homeland via a Danish flag-decorated pillow. 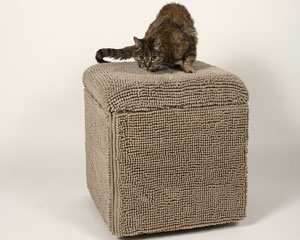 Finally, here’s a piece of furniture that you want in your living room that you’d welcome your cat to claw.

Lots of furniture is not really durable for cat scratching, said Douglas Smith, designer at international design firm SOM, which designed "The Scratch Pad." Made of synthetic microfiber, the material is akin to a bathroom rug, said Smith. It works as a perch for cats, who like a seat up high, and has a top that pops off to reveal storage space inside for cat goodies. 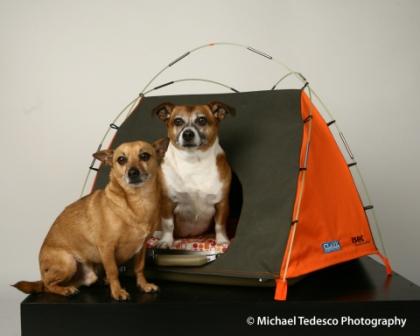 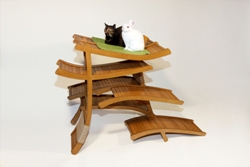 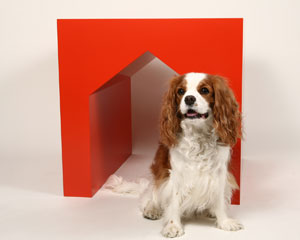 "In the last few years, we’ve been playing with the platonic form of the cube," said Mary Wang, designer at Tsao Design Group and one of the people responsible for this year’s Petchitecture piece at the firm.

"We were trying to evoke the iconic image of a doghouse," said Wang of the simple cube-shaped cutout design. Nevertheless, it can be a cat habitat, too, she said. And beyond that, she added, it is a stylish end table for the home as well.

The plastic-looking piece is actually made of wood that’s lacquered with three base coats of primer and five coats of deep, glowing orange-pigmented varnish to a semi-gloss sheen.

The goal was to create something iconic and simple, but timeless, said Wang. We’ll see what Spot says.

A moveable feast (for the eyes) 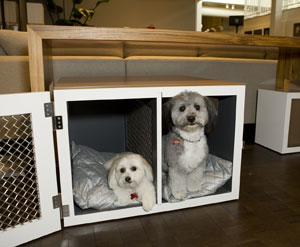 A desk, made of solid reclaimed teak, is the centerpiece of this design by international, San Francisco-based architectural firm Gensler. The commissioned piece features a movable kennel and a separate, movable storage bench underneath.

The clients had just moved from San Francisco to a Marin County, Calif., hilltop home that overlooks Stinson Beach and is bordered on three sides by Mount Tamalpais State Park, said Aimee Taylor, a Gensler designer who worked on the piece. One of the clients works from home and this will be his work desk. 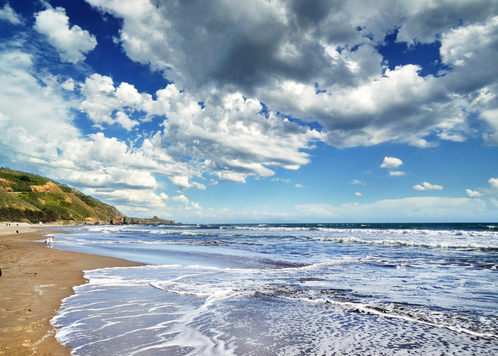 View of Stinson Beach via Shutterstock.

The move is a big change for parents and pets alike, said Taylor. The owners wanted a kennel-like setup to put their Havanese and Havanese Maltese up while they are out of the house. They also wanted the kennel to be movable, so it could be set up under the desk while the client works or moved to the many windows around for taking in the great views. 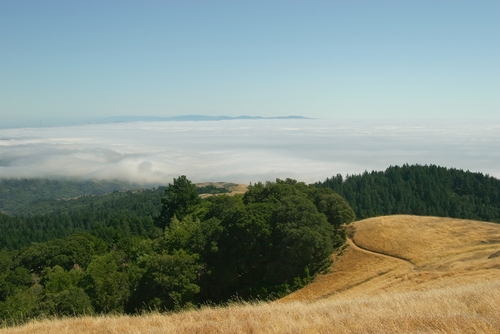 With abundant picture windows offering scenes of deer, bobcats and the Pacific Ocean, the design was about mobility and wildlife, said Taylor, and simplicity.

It comes with a glowing-orange, and very comfortable, Sayl Chair, designed in San Francisco and inspired by the Golden Gate Bridge.