Realtor.com operator Move Inc. is beta testing changes to the official listing portal of the National Association of Realtors that the company says are aimed at making the site easier to navigate and use.

Realtor.com operator Move Inc. is beta testing changes to the official listing portal of the National Association of Realtors that the company says are aimed at making the site easier to navigate and use.

First-time visitors will see a simplified home page that encourages them to "dive into search," while returning visitors will be served up a location-specific landing page that "intelligently remembers what they’ve been doing on the site," said Move Creative Director Amit Kulkarni in a blog post explaining the planned changes.

Kulkarni said those and other changes will be implemented "in phases and increments, and we’re going to be keeping a close watch on what works and what doesn’t."

The new home page design and other changes are being tested at beta1.realtor.com, with 5 percent of visitors to Realtor.com being redirected to the beta site, a spokesperson for the company said. 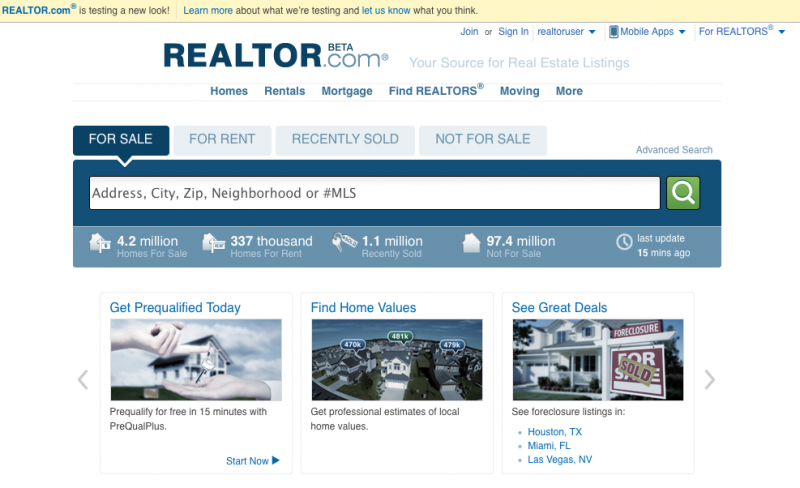 Planned changes to Realtor.com include an enhanced focus on search with an 800-pixel-wide panel, a general decluttering, and an image-accompanied slider bar that presents linked stories intermittently sliding left.

One focus of the redesign is on mobile optimization, but details for this portion of the update have yet to be released. As of this week, the beta site was not mobile optimized.

Move operates Realtor.com under the terms of an agreement with NAR. It’s been about two years since the last Realtor.com update, which took place after Move and NAR signed off on an amendment to the Realtor.com operating agreement that gave Move more leeway to make changes to the site.

The updated Realtor.com operating agreement paved the way for Move to begin running unbranded "Connection for co-brokerage" lead forms next to some listings, a move that proved controversial with some brokers.