The number of homes for sale nationwide continued to fall in September from a year ago, Realtor.com reported today. The 17.77 percent drop to 1.8 million units continues a trend that’s played out in every month this year so far.

For-sale inventory dropped on a year-over-year basis in all but three of the 146 markets tracked by Realtor.com in its report.

Nationwide, median list prices were up 0.78 percent from August to September, to $191,500 and have held steady throughout 2012 — another sign that the housing recovery is solidifying, the report noted. However, median list prices are still 23.37 percent off their early 2007 high of $249,900.

The number of homes for sale nationwide was down 40 percent from a September 2007 high of 3.1 million units. The median age of inventory was also down 11.21 percent on a yearly basis to 95 days. However, that number represents a 4.4 percent increase from August. 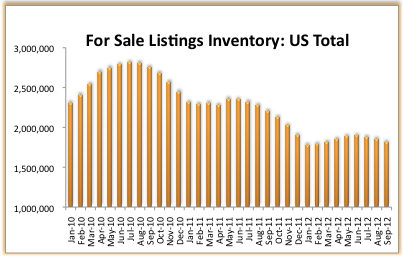 As was the case last in August, California markets continue to dominate a top 10 chart of markets that have experienced the largest year-over-year drop in inventory. Tight inventories and lending standards are two of the California housing market’s biggest challenges to full recovery, said Leslie Appleton-Young, California Association of Realtor’s vice president and chief economist.

Stockton-Lodi, Calif., topped the chart with a 63.04 percent drop in inventory between September 2011 and September 2012. Sacramento, Oakland, and Riverside-San Bernardino (Calif.) rounded out the top four, in order, with drops in inventory of 60.26 percent, 57.14 percent and 42.57 percent, respectively.

California metros also made up the majority of the top 10 metros experiencing the largest year-over-year percentage median list price increases. Santa Barbara-Santa Maria-Lompoc, Calif., topped the list at a year-over-year jump of 32.05 percent in its median list price. San Francisco (No. 3), San Jose (No. 4), Sacramento (No. 6), Oakland (No. 7), and Riverside-San Bernardino (No. 9) were the other Golden State metros on the list. 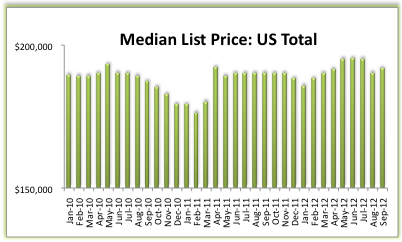