Editor’s note: This story has been updated to reflect that on Oct. 26, Zillow issued a correction saying it is providing information on 1.2 million foreclosed and lender-owned homes, not the 1.8 million originally claimed.

The website that became a household name by mining public records and allowing consumers to see what their neighbor paid for their house is going a step farther, providing users with access to the addresses of 1.2 million homes that are either in foreclosure or have been repossessed by lenders.

Since launching in 2006 as a provider of property records and automated home price "Zestimates," Zillow.com has added millions of for-sale listings and become the most visited real estate search portal on the Internet.

Now Zillow has announced it will provide even deeper access to public records for registered site users, including details on nearly 1 million homes that are at some stage of the foreclosure process, and more than 260,000 additional properties that have been repossessed by lenders but not yet listed for sale.

In most parts of the country property records, including details about a home’s mortgage, are freely available to anyone who walks into the county assessor or recorder’s office. Because lenders are typically required to file paperwork when they initiate foreclosure proceedings, schedule an auction of a property in foreclosure, or repossess a home, an entire industry has sprung up around digitizing mortgage records and making them available to lenders, title insurers, real estate professionals and investors.

Investors and others interested in getting an advance look at distressed properties before they come on the market have long had the ability to become paid subscribers of specialized websites like RealtyTrac.com.

But Zillow is breaking new ground by providing free access to information at this scale and level of detail — including the amount owed by homeowners in foreclosure — to any and all.

"This is another tremendous step forward in consumer empowerment," said Zillow CEO Spencer Rascoff in announcing the move. "Zillow is taking information that was really only available to a select group — in this case, savvy investors — and making it more easily available to interested homebuyers."

But most of the properties that Zillow is revealing the foreclosure status of are not for sale. Although some distressed homeowners Zillow shines a spotlight on may be attempting to negotiate a short sale with the approval of their lender, others may be hoping to stay in their home by obtaining a loan modification or refinancing into a lower-cost mortgage.

By making detailed information on properties in foreclosure available to consumers, Zillow risks raising the ire of distressed homeowners who would rather not have the trail of records detailing the trouble they’re having keeping their home freely available to anyone with Internet access.

When Zillow started generating automated property valuations of homes dubbed "Zestimates" in 2006, a coalition of community groups filed a complaint with the U.S. Federal Trade Commission charging that the estimates were likely to cause "substantial injury to consumers who rely on the inaccurate representations made by the company" (Zillow called the allegations groundless, and continues to offer Zestimates).

Sean O’Toole, founder and CEO of ForeclosureRadar, which provides foreclosure information to real estate professionals and investors, thinks inaccuracies in public records data could pose a challenge for Zillow. ForeclosureRadar encounters tens of thousands of inaccuracies each year in the data it mines, he said.

RealtyTrac Vice President Daren Blomquist said his company, which charges consumers $49.95 per month to access foreclosure data, doesn’t think that Zillow will be able to compete with the accuracy of its services.

"We’ve been doing this for 15 years," Blomquist said, and RealtyTrac has developed quality control measures.

Brad Geisen, founder, president and CEO of foreclosure.com, which provides access to detailed foreclosure information for $39.80 per month, had a similar view. "There’s a difference between free information and quality information," he said.

Zillow spokeswoman Cynthia Nowak said the company obtains public records data from several third-party data providers, which it is contractually barred from naming. She said Zillow will investigate if a homeowner complains that the site has published inaccurate information about their home’s foreclosure status.

"As long as the information is accurate and part of public record, it will be on our site," Nowak said. "We want information to be accurate, so if something is inaccurate, a homeowner can flag it, and we will review it and remove inaccurate information."

Some real estate search portals targeted at consumers have allowed users to search for homes that are in foreclosure or that have been repossessed by banks to become "real estate owned," or REO.

Yahoo Real Estate, for example, partners with Auction.com and mortgage loan data aggregator Core Logic to allow users to search for REOs and homes in the foreclosure process. But users who want to see details like a property’s address must sign up with the search portal’s partners.

Trulia has similar partnerships with Auction.com, RealtyTrac and Wells Fargo that allow it to publish partial information on "preforeclosures" and REOs.

But mixing for-sale listings with "preforeclosure" listings can be confusing to consumers, since many properties in the foreclosure process aren’t for sale.

Distressed homeowners who have elected to attempt a short sale typically hire a real estate agent, who lists their home in the multiple listing service. Banks will also typically market "REO" properties that they’ve repossessed through a Realtor who will market the home in an MLS.

"Every foreclosure investor I know of has stories of having a gun pulled on them," when they went to check out a distressed home where the owner still resided, O’Toole said.

ForeclosureRadar doesn’t make foreclosure info available to consumers because of some of these sensitive issues, O’Toole said.

"Regular transactions are hard, a foreclosure transaction is harder," he said. That’s why O’Toole thinks foreclosure information, for the most part, is best served in a professional’s hands.

But with inventories of homes for sale shrinking in many markets, there’s perhaps a greater incentive than ever to get an advance peek at the so-called "shadow inventory" of homes that may soon be on the market because their owners can’t keep up their payments or which have been repossessed by banks.

According to Zillow rival Realtor.com, which receives listings from most of the nation’s more than 900 MLSs, the number of homes on the market at the end of September was down nearly 18 percent from a year ago, to 1.8 million.

But mortgage loan data aggregator CoreLogic estimates that there are 2.3 million homes destined to come on the market in the not-so-distant future, including 1 million whose owners are seriously delinquent, 900,000 whose owners are in foreclosure, and 345,000 that have already been repossessed by lenders but not yet put up for sale.

"Bringing this information to light, and taking this inventory out of the shadows, can help bring these homes to market faster than ever before," Rascoff said.

Zillow — which went public last year, and currently has a market capitalization of about $1 billion — is also undoubtedly hoping consumers will flock to its website faster than ever before.

In July alone, Zillow claims 37 million unique users visited its mobile applications and websites, up 59 percent from a year ago. The company makes most of its money selling leads and advertising to real estate agents and mortgage loan originators, and more website traffic means more leads.

Zillow has a partnership with NRT Inc., the brokerage wing of real estate giant Realogy, to promote agents who specialize in foreclosures on the site. Other agents with knowledge of foreclosures will be featured too, Nowak said.

"Homeowners who are in default can actually benefit from making this information more easily available to a broader group of homebuyers because selling their house before it is repossessed by the bank will allow them to avoid the credit damage of a foreclosure," Nowak said. 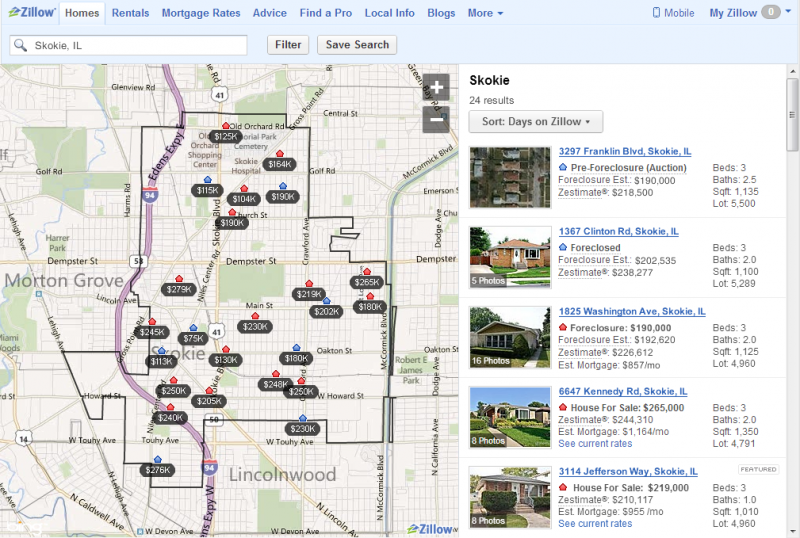 For each property it has records on, Zillow will provide a foreclosure timeline (a default notice, auction date or lender repossession), the property’s address, amount of the foreclosing loan, the unpaid balance, price and tax history, name of the lender that may have repossessed the home, foreclosure trustee or attorney information and foreclosure document descriptions.

Consumers can search for these homes on Zillow.com and via Zillow’s iOS apps by selecting a new "pre-foreclosure" filter in that shows up in Zillow’s search criteria. 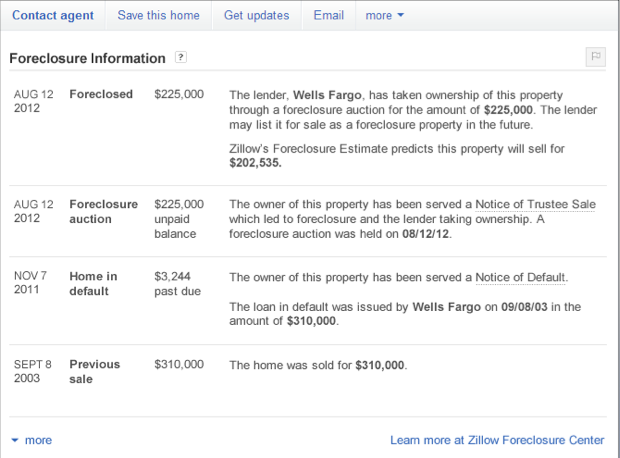 Each foreclosure listing will also include Zillow’s estimate of the sale price of the home if sold as a foreclosure, and the percentage and dollar discount this represents off fair market value.