There, he was amazed at the power of video to drive sales. He wondered why everybody didn’t use video.

"The answer is video can be challenging to make, it can be expensive, it can be time-consuming," Singer said.

Video used to be the purview of feature film professionals skilled in handling manual, technically-advanced video cameras — not the busy real estate agent who wanted to make a one-minute listing video, he said.

"Now, just about everybody has a video camera in their iPhone, iPad or Android device," Singer said. "That’s a real sea change for real estate agents to be able to create their own video." 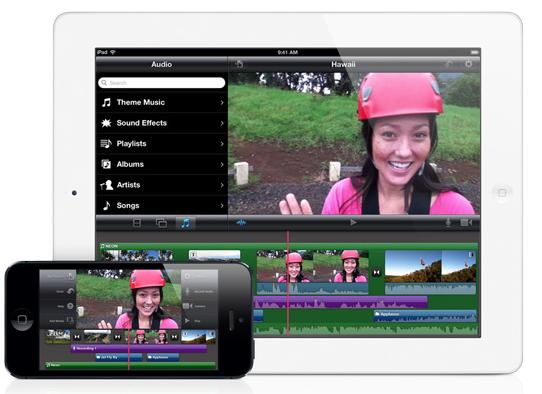 Apple’s iPhone and other iOS devices can shoot and edit 1080p HD video. Photo of iMovie app via Apple.com.

Evolving technology has solved that critical first step for agents — access to equipment that’s easy to use — but Singer also wants to use technology to help agents gain the confidence to actually make their own videos.

He hopes to do just that at Real Estate Connect New York City, which runs Jan. 16-18 at the Grand Hyatt New York. He and two other panelists will conduct a live demo showing how to produce quality video from a smartphone.

"More and more, there’s affordable, fast, good-looking ways to make video and we’re going to provide it to people on stage," Singer said.

The other panelists will be Mark Passerby, CEO and founder of HDhat, a company that edits real estate video and manufacturers devices that improve the photo and video quality of smartphones and tablets, and Andreas Klavehn, director of multimedia devices at Carl Zeiss AG, a company that makes photo and video lenses, among other optics-focused products.

Before founding HDhat, Passerby worked at Lansing, Mich.-based Re/Max Real Estate Professionals as the firm’s information technology (IT) and marketing director. While there, he developed a broker-provided full-motion video tour service for the firm’s more than 70 agents. His interest in video eventually lead him to found HDhat in February 2008.

Klavehn worked as senior marketing manager of IT at Samsung Electronics before joining Carl Zeiss in October 2007 to help launch the company’s multimedia devices division. He spearheaded the recent release of the company’s cinemizer OLED multimedia glasses, which allow users to view 3-D video from mobile devices.

After graduating from Yale University as a music major, Singer founded a media production company, Dawn Treader Productions Inc. At first he supported the company as a professional blues guitarist. Eventually, though, he sold more than half a million CDs and DVDs through QVC.

One of his first media products was a benefit album for the American Cancer Society that featured Paul McCartney, Billy Joel, Ray Charles, and The New York Philharmonic, among other notables. He also produced PBS TV specials — several of which were narrated by George Clooney — and a Christmas special narrated by James Earl Jones.

"I wanted to create media products that would connect with people emotionally," Singer said.

Those TV specials were also pledge drive specials, which got him on the path toward creating effective video — video that tries to encourage people to do something, he said.

"I try to incorporate that into Videolicious, to create video that sells," Singer said.

There are two elements of effective video, Singer said: what you film and what you say. Singer elaborated on these two elements in a two-part series in Inman News in September.

In general, he advises real estate agents to create short video clips of a house, rather than one long walk-through.

"If you put (segments) together, that’s much more in line with what people are used to watching," Singer said.

In terms of what to say, he suggests agents turn up their energy level to look normal.

"The camera sucks the life out of people," he said.

And instead of describing what viewers are already seeing, try talking about use cases or offering historical expertise, such as "these floors were first designed in 1849 by a British architect," Singer said.

"It will be interesting to watch and reflect positively on you," he said.

Imagine you’re grilling something in your backyard, Singer said, and a neighbor asks you about the new grilling gadget you’re holding. Generally, one wouldn’t respond with a hard, scripted sell, but give a friendly explanation meant to convey useful information and give an honest judgement about the product, he said.

"Being down to earth and speaking in your natural voice, being a credible expert — these are all things that translate very well to real estate," Singer said.

"That expertise and the credibility and helping people understand the opportunities (presented by a product) — those are natural selling techniques that agents already use."

QVC is really not a hard sell, but rather an expertise sell, he said. While people may not like watching TV commercials, they do like watching talk shows or instructional shows where they believe they’re getting good information, he added.

And the bigger the price tag, the more important it is to use the backyard fence sale style, Singer said.

Video provides two levels of value: informational and emotional, Singer said. It is much better than photos at showing what a home is like and explaining what it would be like to live there, he said.

Also, "you can make a much deeper emotional connection with a video," he said.

Video can help an agent build trust with prospective clients, show off his or her likability, and make people want to work with the agent even if they don’t like the particular home featured in the video.

"You can build business down the road. It’s a unique opportunity to let people get to know you. You really can’t do that with a picture or a text; you can with a video," Singer said.

One of his favorite Videolicious videos is a property tour of the Barclay Mansion in New York City created by Rubicon Property.

The agent narrating the video notes that Libyan leader Moammar Gadhafi tried to rent the property the last time it went on the market. "We politely declined," he said.

Video is not just for listings; it can be part of an entire marketing campaign, Singer said — neighborhood tours, agent profiles, open house marketing. He recommended testimonials in particular.

"On QVC those were incredibly effective," Singer said. "We called them T-calls. Sales would go through the roof when someone calls in and talks honestly about something. For real estate agents, they can do the same thing."

Singer, 36, co-founded New York City-based Videolicious in 2007. The company started by offering its automatic video creation software VideoSKU to Fortune 500 retailers. The software was initially desktop-based and designed for use in the photo studios of major brands.

"It’s almost QVC style. They can come in and shoot 50 videos in a row," Singer said.

On Aug. 1, at Real Estate Connect San Francisco, the company rolled out its "complete business platform," which vastly increased the availability of its software by making it accessible through mobile devices.

"Now it’s mobile-based, which means it’s really available to real estate agents for the first time. It’s basically expanding the technology from outside of the photo studio to a general knowledge worker audience," Singer said.

"It’s all based on the same core technology. We try to automate the video editing so a video can be completely put together in seconds instead of hours."

Videolicious offers free personal accounts limited to storage of 20 one-minute videos as well as business accounts of either $5 or $10 per month, depending on features desired. The software has more than 800,000 business and consumer users in more than 100 countries, Singer said. He declined to say what percentage were business users.

One important business lesson he’s learned in the past year is to enhance the company’s offerings based on listening to customers’ specific use cases.

"Every time we let the customer guide us, it’s worked out very well for us. A lot of what the product is today is based on that feedback," Singer said.

He expects to roll out "some really cool new functions" in the first quarter of 2013.

As far as what technology trends he’s excited about next year, Singer said mobile has been and continues to be revolutionary.

"We are really excited every time new iPhones and Androids and Windows devices come out," he said.

"The better that the mobile camera gets and the faster these tablets and phones get, the more possible it is for people to do amazing things with video. The quality of the camera and the speed of the device were the limiting factors just a few years ago and now it’s getting better and better every year."

At work, he and his colleagues make quick videos to show each other design ideas, explain things, blog for their users, and provide support responses.

In his personal life, he shoots video all the time, he said.

"I love just shooting video for myself. But I have identical twin girls, so I always find a lot of reasons to take video of them," he said.

As far as other hobbies, Singer said he enjoys taking advantage of New York City and what it has to offer.

"I do love making the most of living here and experiencing the culture and the restaurants and the people," he said.

Though if he could have one superpower, he’d try to experience the city in another way.

"I think flying would be pretty fun. You could see the world from a different perspective, get places a little faster, and get a little fresh air," Singer said.