The Fed committed just last fall to buy $40 billion a month in mortgage-backed securities to keep mortgage rates down. Then in December, the Fed announced it would continue buying $45 billion in long-term Treasurys each month.

The stated purpose of both programs — which together are increasing the Fed’s holdings of long-term securities by $85 billion a month — was to hold rates down until our economy turns sharply better. Which it hasn’t.

Today’s employment report had its usual ambiguities. Optimists and the White House are pleased at 157,000 new "non-farm payroll" jobs, and the November-December upward revision of another 127,000.

Markets watch this number, due on the first Friday of each month, more than any other report because jobs are such a tender spot for the Fed and inflation. However, it is one of the least accurate of all data series.

The rate of unemployment most civilians seem to have learned is even more unreliable, but rising to 7.9 percent in January certainly gives the Fed more space to buy bonds, and pushes back the yips that the Fed would tighten policy in 2013.

Other than those headline items, payrolls and jobless, the employment details were dim.

Year over year, wages have grown 2.1 percent, barely above core CPI. There is no movement in hours worked, overtime, or participation rate — nor perhaps most telling of all, in unemployment inclusive of "involuntary part-time" stuck at 14.5 percent. That figure supports the argument that the new jobs being created are inferior to the ones we lost.

So, why the rate rise, one nearly always reflecting an improving U.S. economy?

In a precursor of our long-term future, rates have risen because forces overseas are larger relative to the U.S. economy than at any time in more than a century.

Part of the reason that long-term rates fell so low last year was fear of implosion in Europe, driving global cash to Treasurys and the dollar. The European Central Bank last fall engaged in one of the great bluffs of all time, stopping the run on Club Med bonds by Outright Monetary Transaction — just buy the bonds with invented money.

The ECB has yet to execute a single OMT purchase; they are contingent on any nation requesting help also accepting enough austerity to get German permission for the ECB to proceed. That would be suicidal austerity, but the bluff has held.

In a world desperate for yield, investors have bought fat yields for exceedingly dubious credits (Spain, Italy) on the theory that the ECB will protect them. Thus cash sloshes out of Treasurys and the dollar and into the euro and silly-bonds. Charts clearly show the euro and 10-year note yield moving in tandem.

Now let us turn to one of the strangest places on Earth: Japan. In deflation for 20 years, its government spinning the turnstiles in and out, one ineffective bunch after another. Having run out of places to hide new debt, Japan is now is trying to do the right thing: panic.

Incoming Prime Minister Shinzo Abe (returning to an office he held briefly six years ago) has instructed the Bank of Japan to print as necessary to turn 1 or 2 percent deflation into 2 percent inflation. Buy Japanese Government Bonds (JGBs) or foreign bonds, or both. The BoJ is resisting as only it can, but Abe will replace its leaders.

Japan is in bluff, too. The BoJ is still inactive, but the bluff has already had two large effects.

First, on the yen. Only 90 days ago, 78 Japanese yen would buy one U.S. dollar. Now a dollar costs 93 yen — the weakest Japan’s currency’s been in three years.

The yen’s move in the last six months also coincides with higher Treasury yields. A lot of people have been mistakenly worried about inflation for, shoot, 20 years, and especially during the last four years’ quantitative easing (QE) by the Fed.

However, if the Germans let the ECB buy, and the BoJ buys like crazy, inducing inflation on purpose, the world deciding that inflation is better than recession… then sell long Treasurys.

That’s the fear, but I don’t think it’s the reality. Neither the Fed nor ECB will tolerate inflation, and Abe’s plan for Krugmanism at the BoJ has all the long-term benefit for Japan of Pearl Harbor. As central-bank inflation bejabbers recede, there’s a pretty good chance our rates will come back down.

Although a rising euro reflects reduced fear of meltdown, it is the very last thing European economies need, because it makes their exports too expensive. 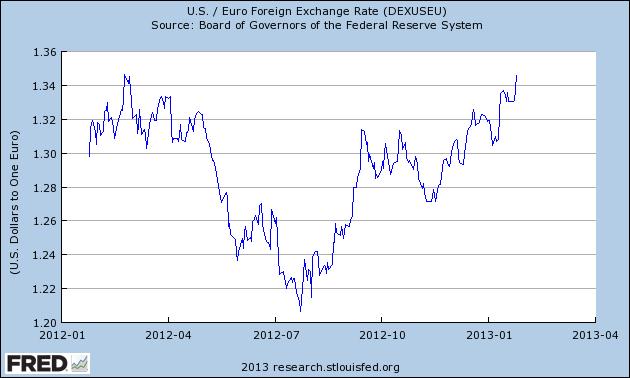 Much of Europe, especially Germany, makes a living from the same rice bowl as Japan: high-quality exports of manufactures and services. As the yen drops vs. the buck, the yen move versus the strengthening euro is doubled. 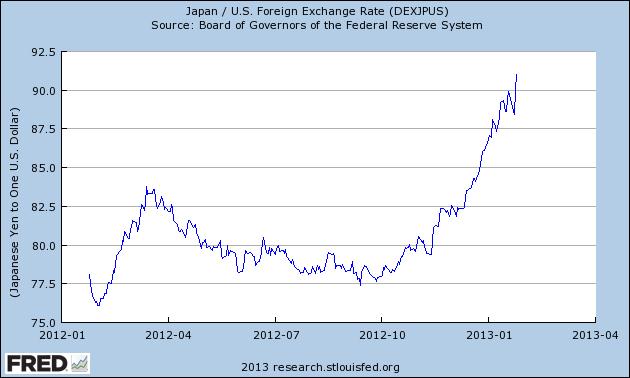 Gaps in this 10-year T-note series are holidays. The correlation to currencies is not exact, but close enough.