The 10-year T-note continued to creep its way upward, at 2.03 percent this week, the highest in 10 months. Hardly a rocket ride, but disquieting.

Two other explanations for market movements: (1) what we have here is just another false-recovery party or (2) — queasiest of all — the Fed is losing its ability to hold down long-term rates.

In a week dominated by speeches, let them speak.

President Obama’s State of the Union, a time warp to the Great Society: "Our government shouldn’t make promises it cannot keep — but we must keep the promises we’ve already made."

In at least half of the households listening, the last dozen years have failed economic expectations, and grown-ups have un-made promises even to children. That’s what sensible people do.

It was hard to concentrate on Rubio’s words. His shirt collars are an inch too big … Ichabod Crane? Will his head fall into his shirt? Cottonmouth-nervous? Wear a Camelback. Not presidential timber. Not even a splinter.

One thing Rubio has in common with the president: Neither has a plan for economic growth.

Larry Summers does. And how! In a Sunday Washington Post op-ed, Summers chided that America should focus on growth; make any deal to stretch out the sequester; immediately address corporate tax reform and repatriate the $2 trillion in cash marooned overseas; accelerate the "transformation of North American energy," Keystone XL and all. "No American should be satisfied with the way the nation’s housing finance system is working. It is high time Fannie Mae and Freddie Mac be forced to step up."

Summers got tossed from this White House. He was blocking the view of the Ego in Chief.

Then on Tuesday Fed Vice Chair Janet Yellen filed her application to replace Ben Bernanke next year. An able and wise Democrat, her inspired speech and charts, available for viewing at federalreserve.gov, are worth studying.

First, fiscal policy cannot act as it might because we have already borrowed and spent our safety margin. If we owed 30 percent of GDP instead of 80 percent and rising, fiscal stimulus would have us going.

Second, housing is MIA, which everyone seems to know except government-hating Republicans and the White House, an odd pair.

Contribution of residential investment to real GDP during recoveries 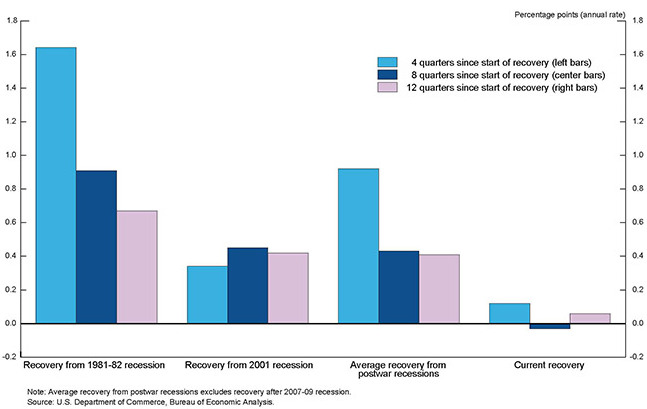 Third, past faith that recessions are short-term, transient affairs helped them to stay short. The longer we’re mired this time, the more endlessly depressing the swamp appears.

If that were not enough, Yellen then spoke to headwinds.

First, credit shortage. The rest of her party marches on with Dodd-Frank pitchforks and torches, but she gets it. Overregulation is as stupid as not enough regulation.

Then a couple of magnificent pages in defense of American labor, its skills and motivation. "The increase in unemployment since the onset of the Great Recession has been largely cyclical, not structural." Those who argue against an activist Fed have claimed that unemployment is the result of obsolete skills and faltered get-up-and-go. We should take our medicine: collapsed wages and 8 percent joblessness. Yellen killed ’em.

Lastly, Yellen articulated proper future Fed action. The Fed "does not expect to raise the federal funds rate as long as unemployment remains above 6.5 percent and [her emphasis] inflation … is projected to be less than 0.5 percent above its 2 percent objective. When one of these thresholds is crossed, action is possible but not assured."

Magnificent. The dim who want mechanical responses will remain … dim. We will not induce inflation beyond target (which so, so many assume and some fools want), nor will we panic at a transient uptick. May Yellen’s example of good government at work not be lost on the others.

And may those who think the economy is turning fast consider her words, too.