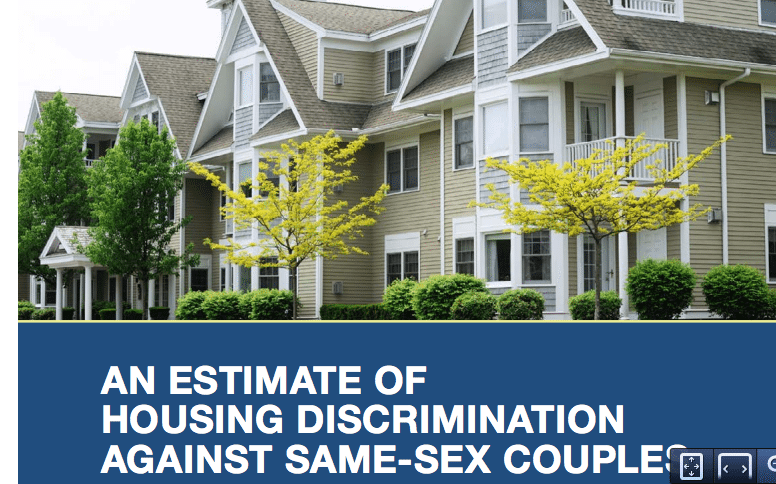 Same-sex couples looking to rent homes are more likely to experience unfavorable treatment than heterosexual couples, according to a study commissioned by the Department of Housing and Urban Development (HUD).

The study — the first to examine housing discrimination against same-sex couples in the rental market — was based on nearly 7,000 email tests conducted across 50 metropolitan markets between June and October of 2011.

“As this study shows, we need to continue our efforts to ensure that everyone is treated the same when it comes to finding a home to call their own, regardless of their sexual orientation,” HUD Secretary Shaun Donovan said in a statement.

For each test, two emails, one purportedly from a same-sex couple and the other from a heterosexual couple, were sent to a housing provider to inquire about an advertised rental unit.

The investigation measured unfavorable treatment based on whether a tester was told the unit was available, asked to contact the landlord, invited to see the apartment, or received a response at all.

Currently, only 20 states offer explicit protection against housing discrimination to members of the lesbian, gay, bisexual or transgender (LGBT) community. The Fair Housing Act, a federal anti-discrimination law, prohibits discriminating against people on the basis of race, color, national origin, religion, sex, disability and familial status, but does not provide the same protection to the LGBT community.

“This study serves as evidence that there is a dire need to include protections for the LGBT community in the federal Fair Housing Act,” said Shanna L. Smith, president of the National Fair Housing Alliance (NFHA), in a statement. “More enforcement of these laws is also necessary as discrimination continues at high rates even in states that have these protections for the LGBT community.

The study comes on the heels of another released by HUD last week that provided evidence of persistent housing discrimination against minorities.

While minorities are less likely to encounter flagrant discrimination when house or apartment hunting than they once were, they are still told about and shown fewer housing units than whites, the study found.

Do you think the Fair Housing Act should be strengthened by adding protections for members of the LGBT community?