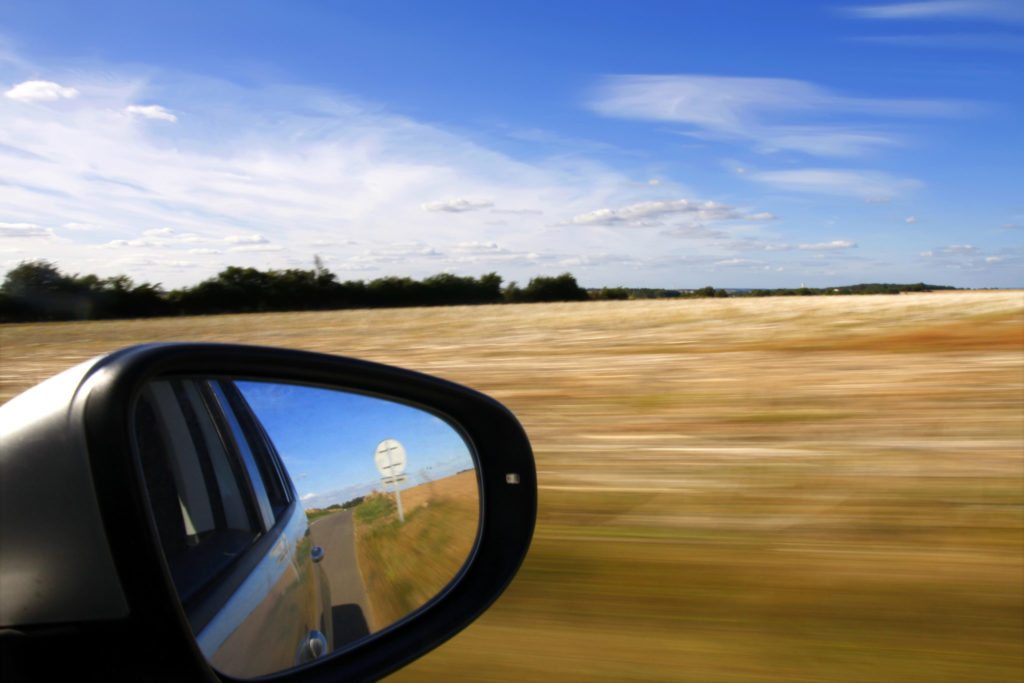 This spring and summer, staffers with the popular listing portal Zillow have been on a cross-country, 15-city tour to reintroduce the website and its agent offerings, in person, to its core customers: real estate agents.

Agents make up the backbone of Zillow’s business — most of the $117 million in revenue the company generated last year came from selling leads and subscriptions to its “Premier Agent” program, a suite of tools Zillow says can help real estate professionals manage and grow their business.

Over the past year and a half, the portal has diversified its offerings to real estate agents beyond just a platform to advertise their services to consumers. In the hopes of becoming a more integral part of an agent’s work life, Zillow now provides tools to help agents manage clients and leads, IDX-enabled websites and a collaborative home shopping tool.

This week, a group of about 50 San Francisco Bay Area agents gathered for the firm’s summit in a hotel conference room in downtown San Francisco. There, they heard from a series of upper-level Zillow sales and marketing, economics, and agent development tools staff, who talked about Zillow’s latest agent offerings.

The agenda also included a 45-minute panel discussion with three high-performing Bay Area agents who advertise with Zillow and shared some of their successful strategies for using the portal.

At the end of the first quarter this year, 34,053 agents were advertising with the portal at a monthly average spend of $259 per agent, which helped Zillow grow revenue in the quarter 84 percent from first-quarter 2012, according to the firm’s first-quarter financial statement.

A big part of Zillow’s success is due to agents like Jeff Good, an agent with Baniqued Realtors based in Hercules, Calif., who sat in the front row at Wednesday’s event. Good says he spent $10,000 last year advertising with Zillow, and made $67,000 back on the investment.

Zillow makes money when agents like Good pay to have their contact information show up a predetermined number of times per month on lead forms that appear on property detail pages for home searches in specific ZIP codes. As home values go up, Zillow CEO Spencer Rascoff said recently, commission checks increase, and when commission checks grow, so do agent advertising dollars to Zillow.

The cost for ad “impressions” varies according to the value of the homes in the desired ZIP code, and the relative amount of Web traffic a specific ZIP code garners.

Zillow, which had previously allowed agents to buy a share of all impressions generated in a particular ZIP code, began switching agents to the new model, in which they purchase a fixed number of impressions, last August. Zillow said the new model allows it to accommodate more agent advertisers in each ZIP code — and also generate more revenue. 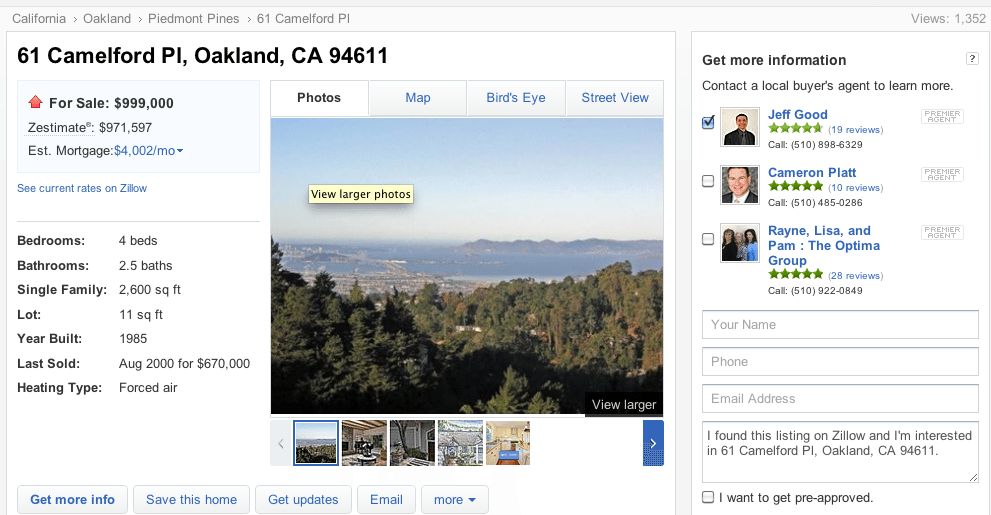 Screen shot of an Oakland, Calif., for-sale property detail page on Zillow that Jeff Good shows up on. 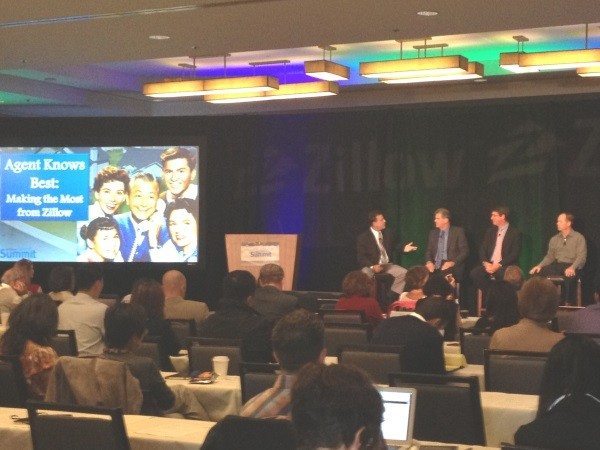 Agents can claim a profile on the site for free, which gives them access to Zillow’s customer relationship management system, but to gain access to the full suite of tools Zillow offers agents they must pay at least $10 per month to become a “Premier Agent.”

For $49 per month, agents, in addition to accessing the full suite of tools, can feature their listings and generate Zillow-powered listing reports for their clients.

Good, who says he currently advertises with Zillow in five Bay Area ZIP codes, said he showed up to the event to learn how to wring even more value from his investment with Zillow.

One thing that stuck out for him from the agent panel, he said, was the strategy each of the three panelists had for always replying to reviews they received on Zillow, either thanking the reviewer for the note about them or for clarifying a subpar or negative review.

Another agent at the event, Rebecca White, with Bay Area-based Better Homes and Gardens Real Estate Mason-McDuffie, was not currently advertising with Zillow. Nor did she want to, she said. White said she attended because she wanted to better understand and be able to answer her client’s questions about the site.

“My clients are on Zillow,” White said. “I want to know how to answer their questions about Zillow.”

Zillow is increasingly becoming the go-to real estate site for consumers. In June, Zillow captured 13.26 percent of all real estate-related Web traffic, roughly 5 percentage points more than any other site, according to Experian Marketing Services.

White said she was frustrated by Zillow’s automated property valuations — “Zestimates” — which she said can be inaccurate. She’s also “resentful of the power” Zillow has with consumers. But White felt she needed to engage with the portal because her clients use it and also was curious about some of the widgets the firm offers that she may be able to integrate into her website.

Haruko Hata, a ZipRealty Inc. agent who pays Zillow for 4,300 impressions each month in one San Francisco ZIP code, said she also attended Wednesday’s event so she could better answer questions her clients have about the popular site.

In particular, she was concerned about Zestimates and wanted to understand them better so she could help resolve issues she’s had with buyers and sellers who point out Zestimates that differ from list prices.

Carol Sawdey, an agent with Prudential California Realty San Ramon who buys a large percentage of the impressions Zillow attracts in two ZIP codes in the San Ramon, Calif., area, said she came to the summit to learn how to get more from her advertising on Zillow.

“I haven’t been using Zillow successfully,” she said.

Sawdey said she learned that it’s important to ask clients to write a review for her on Zillow, to not be so scared of a negative review, and to encourage clients to claim their homes on Zillow so they can make sure its square footage and remodel history is accurate — information that can influence Zestimates.

Sawdey said she also learned that she should focus on following up with leads, and revamp her drip marketing campaign. She said some of the details behind the creation of Zestimates, provided by Zillow senior economist Svenja Gudell, will help her explain them to clients.

Sawdey said she was also very excited by Agentfolio, the new collaborative home shopping tool from Zillow. Agentfolio’s creators, Matt and Susan Daimler, were on hand to introduce agents to the tool.

Agentfolio, which allows agents and homebuyers to collaborate in one IDX-powered system and easily keep up with each others’ searches, is currently available only in Chicago, Boston, Phoenix, San Diego, New York City and portions of the San Francisco Bay Area.

Sawdey said she was disappointed that Agentfolio had yet to partner with her multiple listing service (MLS). Daimler said the tool’s rollout has purposefully been a little slow as it begins to gain transaction. Her team at Zillow handles customizations that are needed to properly integrate with MLSs, she said.

Good, White, Hata and Sawdey said a three-agent panel that covered strategies agents used to maximize the return on their advertising investment in the portal was the highlight of the event.

*Homeowners can enter a “Make Me Move” price for their home on Zillow that they would consider selling it for, though it’s not technically listed for sale.

Some of the other cities Zillow has visited on its summit tour include Denver, Chicago, Los Angeles and Rochester, N.Y., and events in Baltimore and Washington, D.C., are coming up in a couple of weeks. Zillow’s marketing director Mitch Robinson, who spearheaded the event and emcees most of them, says that based on comments the firm has received, the summit tour has been a rave success.

Editor’s note: Kevin Kieffer prompts clients, not agents, as a previous version of this story noted, to write him reviews. Zillow’s Web traffic in June was nearly 5 percentage points more than that of the next most-visited real estate-related website, according to Experian Marketing Services, and not nearly “5 percent” more traffic higher as this story previously stated.

Zillow: Agents flush with commission revenue spending more on ads
Back to top
Only 3 days left to register for Inman Connect Las Vegas before prices go up! Don't miss the premier event for real estate pros.Register Now ×
Limited Time Offer: Get 1 year of Inman Select for $199SUBSCRIBE×
Inmanpot
Log in
If you created your account with Google or Facebook
Don't have an account?
Create an Account
Forgot your password?
No Problem