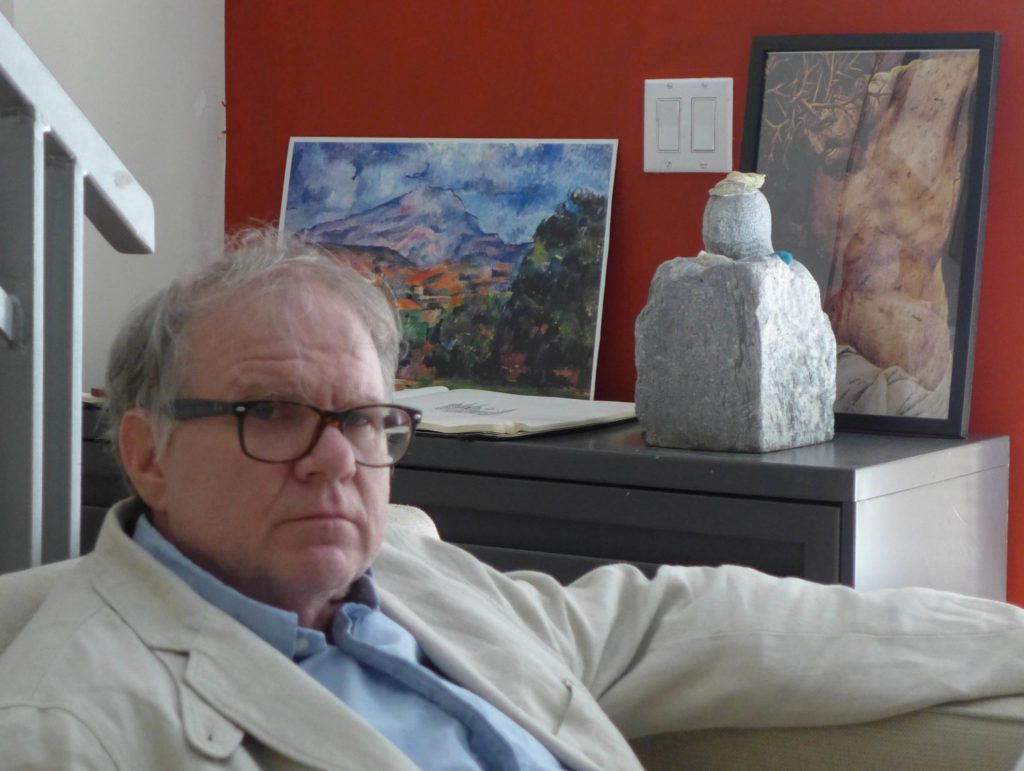 “It is disgusting. It is almost like you are portraying the devil,” the caller said in a quavering voice, according to Smith, owner of Washington, D.C.-based Domus Realty. By Smith’s account, the caller later added: “You’re like the dark side, and the dark side does not see well.”

The message represents just one of many reactions to a colorful job ad that Smith, once a philosophy professor at Georgetown University, recently penned and fired off to what he said were about 10,000 email addresses.

Calling for an “agent-priest,” the job ad has struck a chord with some real estate professionals who say it has given voice to their disillusionment with broker culture. At the same time, some readers of the post, like the woman who seemed to view Smith as something of a Sith lord, have found its cynical tone deeply unnerving.

The second reaction may be understandable: Certain passages in the ad, titled “Domus Realty — From Agony to Ecstasy,” express approval of prospective agents who wish to hurl both gadgets and themselves out windows, “scorn happy faces” and may commit suicide if the world “does not soon remedy or cure its superficiality and shallow notion of freedom.”

But Smith, who once taught college classes with titles like “Nietzsche and Postmodernity” and “Freud and Philosophy,” argues that critics of the ad may not fully appreciate its tongue-and-cheek hyperbole, and also could be missing what he says is its ultimately redeeming message.

Regardless of the ad’s literary nuances, however, he said he still intended it to lay bare some grievances that he and others have with the real estate industry, and, even the universe.

The ad condemns what it seems to imply are two mainstays of modern broker culture: a preoccupation with social media and a fixation on workplace attitude.

Domus Realty seeks agents “who have little knowledge and interest in a variety of social media tools, as inescapable and menacing as they may be” and “actually dislike liking things” (a reference to Facebook’s “Like” button), according to the ad.

Asked to further opine on social media, Smith said he doesn’t resent social media itself. He resents what he said is a failure among agents to fully examine its merits.

“They’re uncritically sold into it and consequently absorbed naively into this as the latest thing that needs to be mastered,” he said. “But maybe something insidious is going on here, a disease.”

He added:  “The word Twitter is like they raped a good word that had to do with birds calling out to each other.”

Based on a number of emails and other responses Smith has received, his perspective resonated with many readers.

“You encapsulated what I have been thinking for the past 20-plus years as a broker and educator in the RE industry into a few paragraphs,” wrote one commenter beneath a Washington City Paper post on the ad.

Another said: “Since reading the original email I got last weekend, I have enrolled in a real estate course with the goal of working for this company.”

In addition to winning points with some readers for its implicit derision of social media, the ad, which Smith said has attracted several applicants, also won favor among some for bashing what it cast as an industry obsession with confidence and optimism.

According to the ad, Domus Realty, which Smith said currently has four agents, has “almost no meetings and never any motivational speakers” and prefers agents “who loathe all talk of positive attitudes and delusional, self-generated confidence, and prefers agents who possess a deep-seated contempt toward such things.”

“What concerns me is that we look at this without really thinking about it, and a lot of it is just bullshit,” he said. “People are going to these things, they feel great for a day … then a couple days later, they’re back in the doldrums, and they need another shot of a webinar. Come on, you know?”

To achieve existential fulfillment, agents must spurn webinars and instead come to grips with their insignificance, Smith said.

Following a description of a Domus Realty broker’s descent into existential agony, the ad describes a rebirth that catapults that broker, now “endowed with a new way of seeing things, with an open heart and an open mind,” into a state of spiritual bliss, charged with a vocational purpose: to help people find homes.

Though he aspires to achieve enlightenment, Smith said that he has not yet completed his journey down the spiritual road that he has so vividly described.

But, apparently, one of his readers has.

“He said to me that he ‘is’ that person I described who went out of the world and saw the sky and joy leaped out of him,” Smith said of a reader who sent him a complimentary email. “He then asked how much it would cost if he could sit down next to me and watch me for a whole day.”

Smith hasn’t settled on a rate just yet.

Channeling Socratic humility, he speculated that a day with him “would be about as exciting as watching an ice cube melt.”

Read the full ad below:

“Domus Realty — From Agony to Ecstasy” (Published with permission from Smith)

Domus Realty is a small company focused on real people, that is to say, on people with faults and weaknesses, with fears and apprehensions, instead of those with gifts and self-assurance and phony cheerfulness, on people with dark thoughts and simple wants rather than people with vanities and possessions.

Domus Realty is looking for agents who have a non-income-producing passion like art or literature or raising children, and need time to carry out this passion but unfortunately need money as well to support it. Domus is also looking for people who have a full-time job and need another source of income and do not want to belong to a large real estate firm with offices, policies, requirements, empty gestures, pretentious motives, happy faces — yes, these especially, happy faces actually disgust the agents of Domus Realty. Domus Realty insists on this, and if you do not scorn happy faces this is not the company for you.

Domus seeks agents who loathe all talk of positive attitudes and delusional, self-generated confidence, and prefers agents who possess a deep-seated contempt toward such things. A company which prefers agents who are more perplexed than confident, more ignorant than knowledgeable. A company with almost no meetings and never any energetic motivational speakers, a company which, if the choice is between optimism and pessimism, prefers the latter, a company that has little respect for much of the business world but realizes people, real people with blood in their veins, do in fact need homes and need help in finding or selling one.

Domus wants agents who have little knowledge and interest in the variety of social media tools, as inescapable and menacing as they’ve become, who are sadly disappointed that the word twitter no longer means the divine song of small winged creatures calling out to one another, agents who wish the word facebook actually has something to do with a book or a face, or refers to a book which, immensely interesting and unique, does in a way have a face, and especially agents who think the word friend is impossible to extend much further than 2 or 3 people.

Domus wants agents who refuse to “like” things by clicking a button on the thin surface of a computer screen. It wants people who actually dislike liking things like this and wish there were a button to click to express their discontent but realize that this, too, is just more of the same.

Agents who on many days want to pick up their laptops or stupid iPads and throw them out the window, or on worse days to defenestrate themselves — worse days that are probably in the end better days.

Domus is interested in people who want to give notice to the world that if it does not soon remedy or cure its superficiality and its shallow notion of freedom and be less concerned with ‘devices’ and acquire some real depth and meaning they will leave it, and in time actually do leave it.

This is when the Domus agent, driven out of his or her mind and at the edge of despair, gets in their car and drives and drives until the road comes to an end and then continues on foot until they finally collapse, and there, where they collapse, they lay back and look up at the sky as though it’s the very first time they have seen it.

And there and then they suddenly realize, in looking thus at the sky, that it is a vast and profound thing, that it is astonishing and wonderful, that it is indeed where a god or gods range, and the earth is not a place owned and hoarded and divided up by metes and bounds but the site of our original abode, and lying there in despair looking up at the sky they are stirred into a sudden boundless joy and know now for the first time in their lives that a circle is infinitely more significant than a square, who out of this dread and metaphysical horror now see the world as a vast openness in which sky overarches earth like the wings of a god over its children, that air and breath are pure beauty and infinite happiness, that clear water resembles more an angel than something to wash their car with.

And then, lying there having collapsed running away from the world, a whole new attitude overcomes them, and their disgust for the world is not a disgust for the world itself but for what mass society has made of it, and they get up, brush off their pants, walk back to their car and drive back to the world they earlier fled, and reenter that world endowed with a new way of seeing things, with an open heart and open mind, with their previous feeling of disrespect turned now into a fresh new respect, and, after having driven back into the city, the people there are no longer mere empty automatons pursuing their own private satisfactions but are real people, actual live animal human people, who are frightened to death and in despair just as the Domus agent was before their epiphany, and that these unhappy people do not even know they are unhappy because they have successfully obstructed and forgot and neglected their unhappiness by watching TV and playing in the playground of the social media and “liking” things on their “devices,” that the people of the world need homes and need someone to find them one, someone who is now regenerated and sees the world with a depth and joy as never before.

If you are interested in becoming this sort of agent-priest for Domus Realty please call, etc. etc.