Homes.com has launched an iOS and Android consumer-focused mobile rentals app that directs all consumer leads to the pro whose contact info is associated with the listing.

Some of the rental listings on the site — which come from Homes.com’s sister portal, ForRent.com, and from agents, brokers and multiple listing services — are paid. But many are not, said Brock MacLean, executive vice president of Homes.com.

Homes.com is not capturing rentals leads through the app, MacLean said. “It reflects our effort to be supportive of who’s listing properties on our site,” he said.

Homes.com claims the app is the first to incorporate a pet-friendly search filter and a built-in commute calculator that uses a mobile device’s navigation tools to estimate commute time from the listing to different locations.

With the release, Homes.com — the fifth most popular real estate site in the U.S., according to Experian Marketing Services — joins competitors Zillow, Trulia and realtor.com in offering dedicated rental apps to consumers.

Realtor.com launched its app in May; Zillow released an Android and iPhone version separately last year; and Trulia brought out an Android version in 2011 and an iPhone one in 2012.

Homes.com’s existing mobile app already allowed consumers to search for rentals alongside for-sale properties, MacLean said, but the rentals-focused app allowed the firm to combine single-family and multifamily rentals into one platform.

The new app also incorporated an interactive map search and the ability to filter searches by nearby amenities, features that MacLean says future Homes.com apps are likely to incorporate.

The explosion in the real estate portal’s mobile rental search traffic — up more than 514 percent from a year ago, MacLean said in a statement — made the rental app a focus for the firm.

In September, Homes.com expanded its partnership with the U.S.’s largest MLS, California Regional MLS, by rolling out Android and Apple consumer mobile apps for the group’s members, and last year the portal began offering media outlets the option to integrate the portal into their site for no charge.

In August, the firm launched a national TV ad campaign with 30-second spots to air on he HGTV, TLC and DIY cable networks through November.

Zillow claims to be largest rental site on the Web 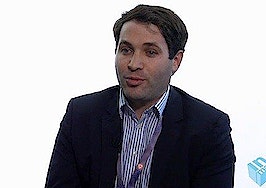 Rental apps for consumers? Rental apps for real agents and landlords? Zumper's got 'em
Back to top
Only 3 days left to register for Inman Connect Las Vegas before prices go up! Don't miss the premier event for real estate pros.Register Now ×
Limited Time Offer: Get 1 year of Inman Select for $199SUBSCRIBE×
Inmanpot
Log in
If you created your account with Google or Facebook
Don't have an account?
Create an Account
Forgot your password?
No Problem