Using Sweeten’s vast historical database and knowledge of residential remodeling projects, Corcoran agents and clients will use the service to give sellers an idea what the return on investment, or “ROI,” would be for renovating a home. Buyers could also use Sweeten to get a handle on the “all-in price,” including remodeling costs, of a home they’re considering, said Jean Lauer, founder and CEO of Sweeten.

For example, Sweeten, formerly “theSweeten,” will break down how much residents are spending on different types of renovations and their cost per square foot by property value tiers: $3 million and over, $1 million to $3 million, and under $1 million.

Sweeten launched in 2011 and makes money as a referral service for a stable of approximately 200 vetted home renovation professionals who pay the firm from 1 to 3 percent of their revenue from a deal as a fee. Currently, nearly 400 homeowners have posted photos and information about work they are looking for contractors to perform, Lauer said.

On every project it coordinates, Sweeten follows up with the homeowner and evaluates the professional based on the homeowner’s satisfaction, Lauer said. It gets answers to questions like: Did the estimated budget hold? Was the projected time for the project accurate?

Lauer says the details of Sweeten’s deal with Corcoran haven’t been finalized, but that Corcoran and Sweeten will likely produce a site that includes interactive videos and case studies to give clients and agents perspective on remodeling costs.

For an example of the type of data the 2-year-old firm has, check out an interactive map feature the firm released on Wednesday that surfaces every licensed residential remodeling project in New York City for the last 10 years with details like the owner’s name, the architect, a description of the project and its estimated cost, and a link to the related New York Department of Buildings file online. 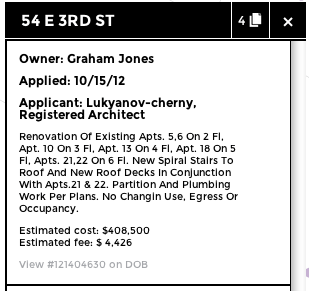 The map also allows users to filter out projects by construction cost estimates — more than $5 million, $1 million to $5 million, $350,000 to $1 million, and up to $350,000 — by date range via a slider bar at the bottom of the map. Users can also see which deals Sweeten has helped coordinate.

By registering to become a Sweeten “Insider” for $10 per month, users can set themselves up to receive email alerts for addresses they want to track. Sweeten will send an email out once a month with all the new remodeling projects filed with the Department of Buildings at that address in the last month. Paid subscribers can also view all of the renovation projects for an address, instead of just one in the free version.

Lauer says there’s been tremendous interest from brokers and appraisers in the new map project, which it unveiled early to Corcoran agents while working toward the exclusive deal they ended up signing.

“When (brokers) get a listing, they’re looking at what the cost is for renovation and what the investment is for the entire building,” she said.

Lauer says appraisers are interested in the data, because they typically appraise a unit higher if it’s in a building that has seen more renovation.

The map also gives homeowners and market watchers insight into what might be the hot markets, based on the concentration of remodeling activity, Lauer said. 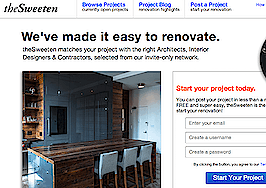 Report compares cost vs. value of remodeling projects in 81 cities

Realtor.com cracks open NYC market with listings from The Corcoran Group
Back to top
Only 3 days left to register for Inman Connect Las Vegas before prices go up! Don't miss the premier event for real estate pros.Register Now ×
Limited Time Offer: Get 1 year of Inman Select for $199SUBSCRIBE×
Inmanpot
Log in
If you created your account with Google or Facebook
Don't have an account?
Create an Account
Forgot your password?
No Problem