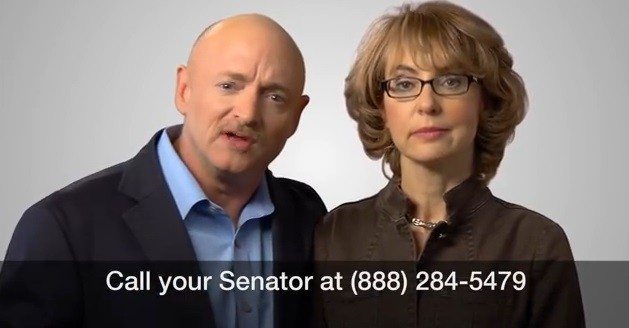 Mark Kelly — a retired astronaut turned gun control advocate after his wife, former Arizona congresswoman Gabrielle Giffords, was nearly killed in a 2011 mass shooting — will deliver the keynote address at the National Association of Realtors’ annual conference in November.

Kelly will take the stage on Saturday, Nov. 8, on the second day of the 2014 Realtors Conference & Expo in New Orleans, which will run Nov. 7-10. Giffords will also make a special appearance, NAR said in a press release.

Two years after Giffords was shot in the head in a shooting that killed six people, she and Kelly founded a nonprofit political action committee, Americans for Responsible Solutions, that pushes for legislation to prevent gun violence and protect responsible gun ownership.

Mark Kelly and Gabrielle Giffords in an April 2013 video produced by Americans for Responsible Solutions calling for stricter background checks for gun licenses.

The couple say they are “gun owners and strong supporters of the Second Amendment,” though some of the measures they advocate — for instance, “a background check system that will stop the most dangerous among us from buying guns, by getting records in the system and closing the Internet and gun show loopholes” — are opposed by the National Rifle Association (NRA) and many gun owners.

According to the Center for Responsive Politics’ website, opensecrets.org, the Americans for Responsible Solutions “super PAC” has raised $15 million in the 2014 election cycle, but made no contributions to candidates for federal office or independent expenditures.

“Mark Kelly was selected because he’s an American astronaut, a retired U.S. Navy captain, a best-selling author, a prostate cancer survivor and an experienced naval aviator who flew combat missions during the Gulf War,” she said.

“He exemplifies leadership, the importance of teamwork and courage under pressure, which is why NAR is very excited to have him and [the] former U.S. congresswoman accept our invitation to address this year’s attendees.”

NAR increased annual member dues by $40 in 2012 to raise money for political advocacy at the local, state and federal level and take advantage of a Supreme Court ruling removing limits on independent expenditures. NAR says it backs candidates who support the “Realtor Party” agenda, funding re-election campaigns of influential Democrats and Republicans alike.

Another celebrity in attendance at the group’s annual convention will be Jennifer Hudson, an Academy Award-winning actress, Grammy Award-winning recording artist and best-selling author. Hudson, who landed a star on the Hollywood Walk of Fame in November, will perform at the conference.

Registration for the event opens on May 7. The conference’s website, including a full conference schedule, will go live at around 1 p.m. Eastern today.

NAR starts its RPAC donors young
Back to top
Only 3 days left to register for Inman Connect Las Vegas before prices go up! Don't miss the premier event for real estate pros.Register Now ×
Limited Time Offer: Get 1 year of Inman Select for $199SUBSCRIBE×
Inmanpot
Log in
If you created your account with Google or Facebook
Don't have an account?
Create an Account
Forgot your password?
No Problem