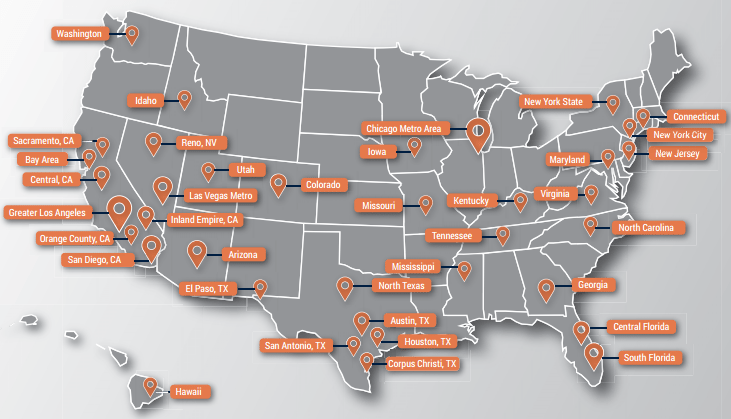 The 21,000-member National Association of Hispanic Real Estate Professionals based its rankings on broker-attested closed transaction sides in 2013, which the association verified through available third-party data, including multiple listing service records.

While previous versions of the list considered agents identified through MLS record searches as well as self-nominations, this year only agents who self-nominated — over 400 — were considered. NAHREP membership was not required. The trade group did not distinguish between individual agents and agent teams on the list.

“The Hispanic real estate market is large and is growing rapidly,” said Jason Madiedo, NAHREP’s 2014 president, in a statement.

“Since 2010, Latinos have accounted for 56 percent of the total net growth in U.S. owner households, with purchasing power of approximately $1.5 trillion projected next year.  These top agents are achieving tremendous success representing buyers and sellers from markets across America, and NAHREP is honored to salute them with this report.”

This year’s 10 top-producing Latino real estate agents in the U.S. are:

Many of these agents are familiar names on the top 10 list. Marshall Carrasco was the seventh-most productive agent last year with 319 transaction sides. This year, he moved up to No. 2 and boosted the number of deals he closed by 57 percent, to 500. Marty Rodriguez has been among the top 10 for three years running. This year she kept the No. 3 spot, but increased the number of deals she closed to 442 from 409.

Like Rodriguez, Christopher Tello and Leo Pareja have been among the top 10 for three years running. David Acosta and Daisy Lopez Cid have also previously made the list.

Franchise giant Century 21 was the most heavily represented brand among the top 250 Latino agents with 48 affiliated agents, followed by Re/Max with 32 agents, and Keller Williams with 24 agents.

Just over half of the agents on the list, 56 percent, were male, and 44 percent were female.

NAHREP plans to recognize the top 250 Latino agents during the NAHREP 2014 National Convention and Latin Music Festival in Los Angeles on Oct. 14.

The report was produced “in association” with Zillow, but Zillow did not take part in the report’s creation, NAHREP said. Rather, Zillow agreed to promote the report’s distribution throughout its network of subscribers via its blog and social media channels.

Zillow did not respond to a request for comment on whether Zillow paid for its branding to appear in the report.

Editor’s note: This story has been updated to note that NAHREP did not differentiate between individual agents and agent teams in its rankings and that Zillow did not help create the report, but is helping promote it.