Some real estate agents specialize in neighborhoods. Senada Adzem has racked up $270 million in sales in a single luxury condo tower in Boca Raton, Florida. 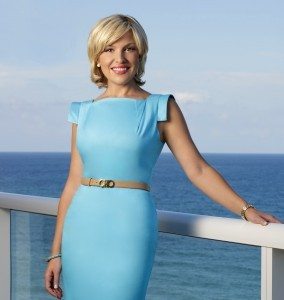 Adzem, leader of The Senada Team at Douglas Elliman Real Estate, was the original listing agent for 1000 South Ocean Blvd., which broke ground in the fall of 2007, the Palm Beach Post’s Kim Miller reports. Although the housing downturn was already well on its way to becoming a global financial crisis at the time, Adzem persevered.

The building sold out in 2013, and Adzem continues to handle resales there. She just sold a 6,260-square-foot unit in the complex that was on the market for less than five days for $5.99 million, and has three more listings in the building.

Adzem already has a track record for overcoming adversity — as a teenager growing up in war-torn Croatia and Bosnia, she supported her family working as an interpreter and liaison for the United Nations Protection Force.

She moved to the U.S. at 18 to attend college on a scholarship, earning a degree in international business and political science from Graceland University in Iowa. After working in finance, she was recruited by Trump International and made a career switch to real estate, which turned out to be something of a calling, Adzem told Bizwomen reporter Hilary Burns last fall.

After five years with The Corcoran Group, Adzem helped convince Douglas Elliman to expand into Florida, and today is the company’s director of luxury sales.