The Fed is coming. Another reasonable payroll report today gives the Fed all the cover (if not justification) necessary. Expectations are so high that it would be odd if the Fed did not lift from zero next month.

The Fed is coming. Another reasonable payroll report today gives the Fed all the cover (if not justification) necessary. Expectations are so high that it would be odd if the Fed did not lift from zero next month.

Even odder, in response to heightened Fed probability, long-term rates fell today. Again. Not a lot — the 10-year T-note from 2.25 percent Thursday to 2.17 percent, but down from the 2.45 percent prevailing all through June and early July.

First, the data: Another 215,000 jobs in July, but just keeping up with population in a growing nation of 321 million, unemployment unchanged at 5.3 percent. Most importantly, average hourly earnings gained 5 cents in July, one measly nickel to $24.99.

Supporting the Fed, the Institute of Supply Management (ISM) July manufacturing survey held positive ground at 52.7, and the service sector companion screamed to 60.3.

Optimists were thrilled by auto sales at 17.5 million in July, but missed the slippery part: Car sales fell year over year, and cheap gas pushed light trucks to the entire gain and then some.

“Overseas weakens” is everywhere, led by China’s Markit ISM dropping to 47.8. Europe is on vacation in August, danke Gott.

The gazillion-dollar question for housing and a lot else: Why are long-term rates falling, and will they stay down?

First, the traditional observation. A yield curve flattening in advance of a Fed hike is a stark warning to the Fed. Yield curves flatten in two ways: Sometimes short-term rates rise underneath long-term ones, narrowing the spread; other times, long-term rates fall down toward short ones.

Traditionally, the latter — happening now — is the deadly signal.

But tradition is unreliable today. There are three good reasons for capital to gobble long Treasurys at negligible yield:

The Fed normally owns about $1 trillion in various government paper, a routine effect of conducting monetary policy. About half of that normal holding is Treasurys and one-third of that in short-term T-bills.

Today, the Fed owns $2 trillion in Treasurys alone, quadruple normal and all long term, and another $1.5 trillion in long-term mortgage-backed securities (MBS). Whenever any of this paper matures, the Fed buys to replace it.

No matter how high the Fed takes the overnight cost of money — the federal funds rate — reinvesting its Treasury/MBS portfolio provides a heavy downward force on long-term rates.

Nobody should worry about that portfolio. If inflation ignites, or if housing at last joins the economic party and overdoes it, the Fed has available the simplest tool in the world: Stop reinvesting or, if necessary, sell some Treasury/MBS, and long rates will jump and choke off whatever overheating is worth worrying about.

In liftoff the Fed will attempt a no-effect normalizing rise in short rates while leaving long ones mostly undisturbed, protecting a shaky housing recovery.

Housing someday might ignite overall overheating. There is tremendous pent-up demand, and punishing rents will drive youth to buy as soon as they can. But in the near term, the Fed-housing-mortgage equation is circular and self-fulfilling: Mortgages are not going to jump until housing is strong enough to justify/survive the jump.

I cannot conclude this week without mention of the Republican debate. Once a junkie, always a junkie. Advice to non-junkies: The primary support for Donald Trump comes from Democrats for Trump. Most media is left-side, and no coverage is sillier than by opposite-party commentators eager to embarrass the other party.

As odd as the crowd of candidates and format, last night sorted midgets from stature. Kasich, Bush and Rubio dominated by sheer weight of personality and belief in inclusion. May the Democrats battle on the same ground, and may the country benefit. 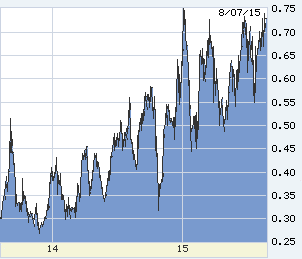 The two-year T-note is the Fed watcher, this chart (above) two years back. Consistently rising bottoms, but four tops since January in the same place.

Takeaway: The Fed is coming, but 2s have not yet begun to discount the next move. And the next. At today’s level, 2s completely disbelieve that the Fed would reach 1 percent next year — in a rising Fed environment, 2s should always trade at a premium to near-forecast federal funds rate. 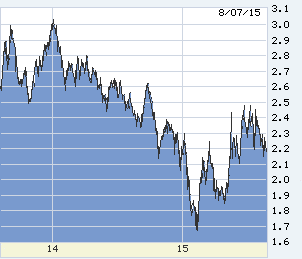 Confounding most folks today: a two-year chart of the 10-year T-note. At the end of 2013 the double-top “Taper Tantrum,” then the overdone bottom last winter, driven deep by Europe trouble. Then the springtime rise in expectations for a strong economic rebound from bad winter weather. Now stumbling around because there is no strong rebound. And maybe, just maybe, telling the Fed that liftoff is premature. 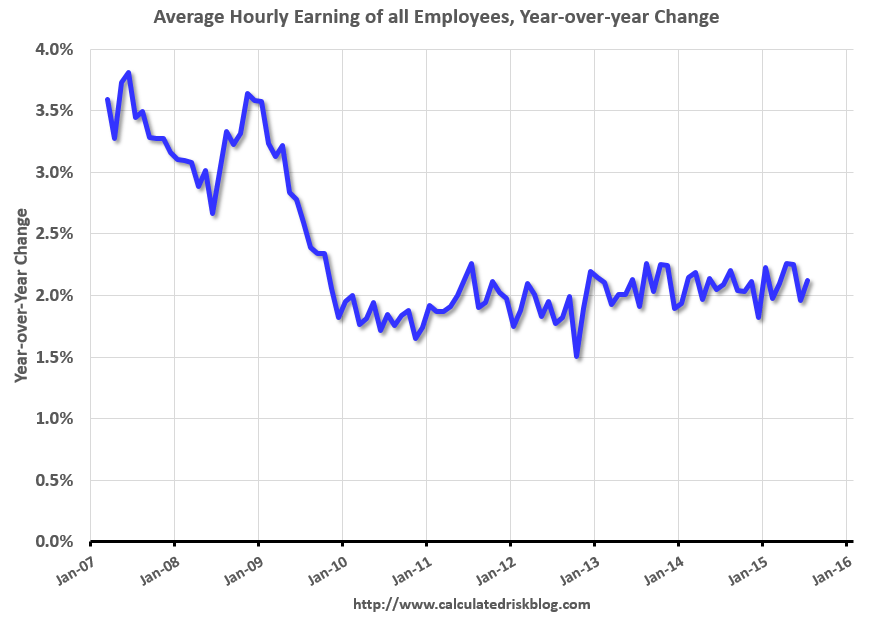 Wage chart thanks to www.calculatedriskblog.com. Fool with lipstick all you want, but there is nothing here. 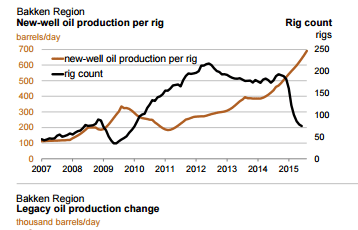 My family are Okies, which makes me an expert on oil. Uh-huh. Sources I have trusted have been dead right about the oil market in the past year: Tight-oil innovation and drilling efficiency have knocked the bottom out of prices and top off of supply.

We are drilling less and less and producing more and more. Not just limiting inflation, but damaging and deflationary to marginal producers (Russia, Venezuela, Nigeria) and overspenders (Saudis).

Meanwhile, since oil trades in dollars, stimulus to the rest of the world is limited by their currency devaluation versus the dollar. 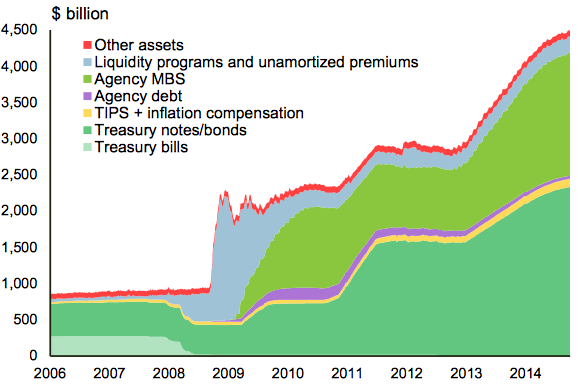 The Fed’s balance sheet by components. 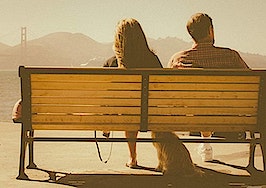 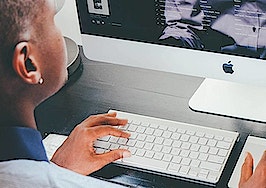 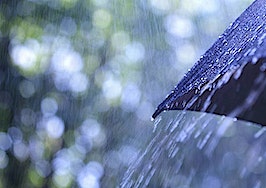 Finances, economy impact consumers' opinions on housing
Back to top
TOMORROW: Leaders from eXp, Corcoran, RE/MAX, The Agency, and more are speaking virtually at Connect Now. Listen or watch live + receive the replays.Register Now×
Agent Appreciation Sale: Inman Select for only $85.CLAIM OFFER×
Inmanpot
Log in
If you created your account with Google or Facebook
Don't have an account?
Create an Account
Forgot your password?
No Problem