At Inman Connect New York, Brad Inman said that he was thinking about buying another house. I wanted to stand up and say, “Don’t do it — the next downturn is on the way!” There are multiple signs the next downturn is around the corner, but what if you could predict whether a specific property in a given market area would increase or decrease in price during the next year?

At Inman Connect New York, Brad Inman said that he was thinking about buying another house.

I wanted to stand up and say, “Don’t do it — the next downturn is on the way!”

There are multiple signs the next downturn is around the corner, but what if you could predict whether a specific property in a given market area would increase or decrease in price during the next year?

Ever since we listed our house in September and lowered our listing price just two weeks into the listing, my gut has been telling me the next slump is coming. Our decision to lower our price paid off. Out of 47 listings in our price range and location during November and December, there were only two sales, and ours was one of them.

At Inman Connect New York, Brad Inman said that he was thinking about another house.

My sense is that we are in 2006 all over again. Prices might still be increasing, but they have already flattened in many areas, a precursor to the next downturn. As I speak with real estate professionals across the country, about 80 percent of them are feeling the same vibe.

Yes, there are pockets where the market is still roaring, but that’s not the case in most areas.

What the experts say

“Many markets are already hospitable for buyers, but we have yet to see the demand. This implies that consumer confidence and the inability to overcome the barriers to purchase are a real headwind to a fully engaged housing market, especially for first-time homebuyers.”

Jonathan Smoke, chief economist at realtor.com, identified a major contributor to the problem as being the burdensome level of rents in 85 percent of the markets that keep households from saving toward a down payment.

Lou Barnes, my favorite prognosticator of rates and mortgage conditions, explained how negative interest rates in Japan and Europe (the banks charging you for leaving your money on deposit with them) can pave the way for a deflationary cycle.

In deflationary cycles, prices decline while the value of the money in your wallet actually increases, the exact opposite of an inflationary cycle, when your cash loses value as prices increase. In other words, why buy anything when the cost of it is going to continue to fall?

Barnes went on to say that even though things look good in terms of U.S. interest rates and demand, there’s no inflation or wage growth.

Inman Market Intel, powered by Weiss Analytics, the brainchild of Allan Weiss of Case-Shiller-Weiss fame, is the first tool that provides more than a decade of pricing data for 50 million individual properties in 38 different states based on 300 million sales.

In the coming weeks, Inman will be providing its readers the Weiss Analytics data so local agents and brokers can get this local micro-information on their devices and websites and share it with their customers.

What’s really exciting about this tool is that it also predicts how prices will change during the next year — not only in major metros and ZIP codes, but also for individual properties. It’s this combination of prediction linked to specific properties that differentiates this tool from Realtor Property Resource (RPR) and other market reports.

Here’s an example of how it works:

The two homes charted below are a few blocks from each other and are located in the 07461 ZIP code. The gold line represents historical values of 27 Pochuck Drive, a 960-square-foot home built in 1960. Over the last year, it appreciated 9 percent and is forecast to appreciate another 5 percent in 2016. 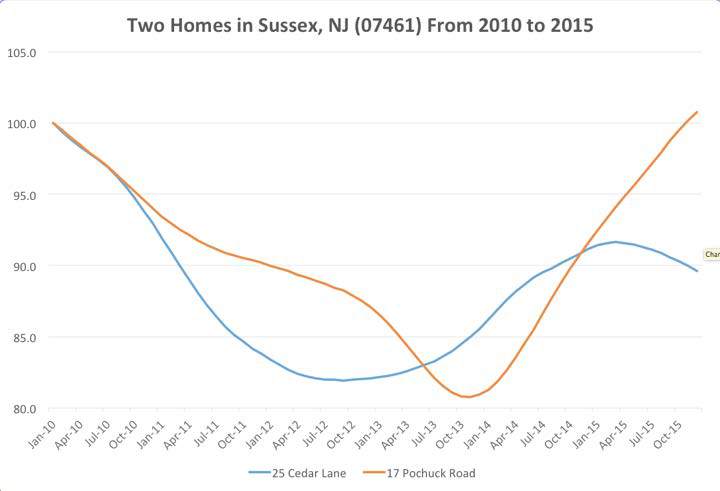 The blue line represents the historical values for 25 Cedar Lane, a 854-square-foot home built in 1930. Over the last year, it depreciated by 2 percent and is forecast to stay steady during 2016.

Market Intel also provides over a decade of history in an easy-to-understand heat map format. To see the heat map for the 07461 ZIP code, click on the link below:

The map shows how the market has decreased and increased since 2001, with the predominantly green maps being times of appreciation and the red maps representing times of depreciation.

So should Inman buy?

Assuming Brad Inman is considering purchasing in either New York City or in West Hollywood, which area would offer the best appreciation? The heat maps for the New York Metro area and for West Hollywood are below.

To make the best decision possible, Inman would have to compare specific properties on their predicted appreciation or depreciation.

Although New York City has many areas where prices are appreciating, it looks as if the green areas representing appreciation in West Hollywood are starting to disappear, with shades of red just peeking through.

In other words, the prices in West Hollywood might have already peaked and could be showing signs of a potential downturn.

So the question facing Brad is this: “Do I invest now, knowing my dollar might be worth more in my wallet than in a property, or do I search for a property that will outperform the market where I want to be an owner?”

The ability to better quantify not only the history of a property — but also the ZIP code, overall area and where the market is heading in terms of specific properties — opens the door to better pricing models for agents and better decisions for both buyers and sellers. 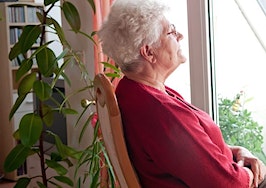 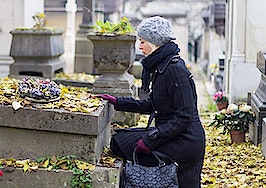 The death of competitive market analyses as we know them 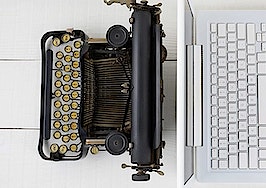 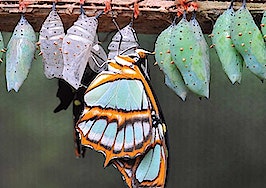 How to convert Internet leads into signed business
Back to top
Only 3 days left to register for Inman Connect Las Vegas before prices go up! Don't miss the premier event for real estate pros.Register Now ×
Limited Time Offer: Get 1 year of Inman Select for $199SUBSCRIBE×
Inmanpot
Log in
If you created your account with Google or Facebook
Don't have an account?
Create an Account
Forgot your password?
No Problem