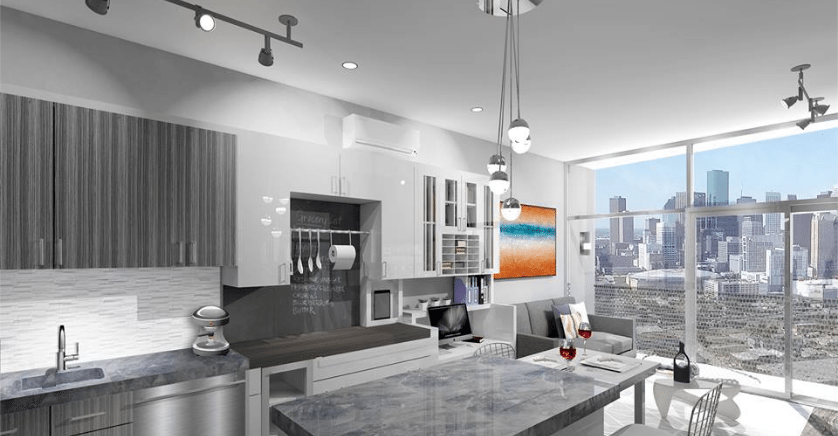 In June, The Ivy Lofts announced some changes on the horizon for the development, which meant less living units and new hotel and retail space.

The Tokyo, but without the additional two feet of space being added in the new design.

But there was a lack of communication between developers, Novel Creative Design LLC, and the clients and general public. Phone calls went unanswered and disgruntled Facebook messages were met with vague responses, according to potential buyers.

Jared Anthony, currently on the marketing and public relations staff for the project, said the communication blackout was a terrible way to handle it. Anthony was an agent at Re/Max Inner Loop when this happened. In his current role, he’s the only remaining member from Re/Max Inner Loop team still in the building.

When Inman News reported on Ivy Lofts in March, the development included 550 units, with 65 percent of the units considered micro condos — less than 500 square feet.

Though there have been no new plans unveiled yet and ground has yet to be broken, Anthony says the developers are still on track for mid-2018 completion.

What we do know is that the initial architect — Houston-based Powers Brown Architecture, which designed much of the micro units — is no longer working on the project. Novel Creative Development LLC has hired EDI Development as the new architect, and the new plans are expected to be released on October 10.

The firm is still moving in the direction of adding hotel space to Ivy Lofts. There will also be two floors of commercial space, according to Anthony. Novel brought on the Weitzman Group as the commercial broker, while Brad Hermes Keller Williams Realty has signed a joint marketing agreement with Re/Max Inner Loop as the residential brokerages.

A new design, but of what?

The new plans are going to change everything except one unit’s design, developers say. The only one still referenced is The Tokyo plan, which is the Ivy Lofts’ smallest floor plan.

The only change being made on The Tokyo model is to the unit’s width, which will be expanded by two feet. This will not add significant square footage, but is still a healthy addition to the original plan, which was 310 square feet.

At one point in time, this rendering of Ivy Lofts was considered. The new design is much different according to Jared Anthony.

Renderings of the re-designed Ivy Lofts were used preemptively to list the property on LoopNet in mid-September. Swamplot, a real estate blog, picked up the photos before they were taken down. However, the designs were not finished, according to Anthony, who says the renderings don’t resemble what the finished product looks like.

Although sales were much slower than expected (the Houston Business Journal reported 68 secured contracts in the four months after opening an on-site sales office), the target market of millennials was also not responding how Novel hoped they would. Novel Vice President of Business Development Wen Pen Tsai told the Business Journal that a majoroty of the 68 sold units were bought by investors looking to rent them out.

Some of the future clients who intended to live in their purchase units were not happy about this. The Ivy Lofts Facebook page was blasted with unhappy buyers who felt deceived and wanted an explanation. Ivy Lofts Facebook administrators directed people to call them to sort out any issues.

Anthony organized a “town hall meeting” of sorts with investors, contractors and buyers. He was expecting bloodshed, but said that after communicating the changes, things went over pretty smooth.

The clients who purchased units already — there were 68 original contracts — were offered first pick in the order of their reservation. If someone purchased a Tokyo at $119,000 in April, the next closest comparison is $150,000 right off the bat.

Anthony said this is a financing issue.

“The mortgage partner that they had found initially did nothing as far as get[ting] people pre-approved,” Anthony said. “Look, [as far as] financing options, they had nothing.”

“It was, ‘Come in with either cash or 20 percent down.’ Well, this project is ideal for millennials, young professionals — we have good location to the university. For the younger generation, not many can come in and plop down 20 percent.”

The lack of finance options is where Anthony sees the biggest issue with pre-sales.

Anthony and his partner found Jennifer Hernandez at Legacy Mutual Mortgage in Houston to help design new finance options. Since these units were designed with the millennial in mind, Anthony needed something to attract purchasers who most likely do not have cash in had or 20 percent to put down.

“We have a good starting point now for the new sales team for once we do go live again to back through and reach out to those people,” Antony said. “We now have financing!”

Ivy Lofts will be developed at 2604 Leeland Ave. in Downtown Houston.