by Nav Athwal
Share this article
You successfully shared the article.
Close

Residential real estate investment is going through a period of resurgence. Single family home and condo flips hit a six-year peak in the second quarter of 2016, with 51,434 projects completed.

That represents a 14 percent increase over the previous quarter. The number of investors flipping homes reached its highest level since Q2 2007.

There are a lot of factors that have investors making a return to flipping. Low interest rates and a favorable lending environment have allowed developers and operators the opportunity to raise capital affordability, but a rise in new real estate tools and technology has played a pivotal role in this growing trend.

A decade ago, the landscape for financing fix-and-flip projects was relatively barren. Investors had a limited number of avenues available for purchasing a rehab property.

Coming to the table with the full amount of cash in hand was one option.

In 2006, at the peak of the housing bubble, the average home was selling for just over $230,000. Pulling together that kind of funding might have been challenging for the typical individual investor, even in light of how well the economy was doing prior to the market’s collapse.

A conventional mortgage loan would have been an alternative but then, as now, banks are more focused on owner-occupied properties. Even if an investor were to be approved for a bank loan, the wheels of conventional financing have a tendency to move slowly, putting them at risk of losing the property to another buyer.

Hard money lenders represented a third alternative. Investors could buy properties and complete flips using short-term loans, without having to worry that another investor would swoop in and close the deal first. Compared to bank financing, the advantage of hard money lending for fix-and-flip deals was — and continues to be — the fact that it’s largely asset-based.

There’s less emphasis on an investor’s credit and a more concentrated focus on the property’s anticipated profitability. The tradeoff, however, is typically a much higher interest rate than what a bank would charge.

If you fast forward to where we are now with fix-and-flip financing, an entirely new path is being forged. Tech’s capabilities are changing the old-school rules of borrowing on a broad scale, with investors reaping the benefits.

Over the past several years, technology has been on a mission to reinvent the real estate industry. Venture capital firms funneled an estimated $1.5 billion into real estate tech startups in 2015 alone, according to research from CB Insights.

They see a massive industry that is still conducting business with pen and paper in some cases and salivate at the chance to back the innovative startups that could redefine the space.

So far, the disruption of real estate by technology has strongly influenced the way investors connect with financing for fix-and-flip projects. The impact is most noticeable with regard to two specific aspects: speed and convenience.

Rehabbing is a sector of the real estate investment market that requires a certain degree of agility. Investors need to be able to move quickly on deals.

There’s simply no time to sit around wondering whether you’re going to be able to secure the financing you need. Technology has eliminated the waiting game.

Automation and online collaboration are significant contributors, giving online lenders the ability to deliver funding in less time so that investors aren’t at risk of missing out on an opportunity.

Although technology has accelerated the fix-and-flip financing process, it hasn’t forced lenders to compromise their underwriting standards. If anything, tech is making it easier for lenders to evaluate and approve borrowers to ensure that deals are credible.

Location no longer holds investors back

Another aspect of tech that makes it a boon for investors is its ability to transcend geographic limitations. With hard money loans, the lender might prefer to focus on a specific region or property type. They might want to concentrate on funding deals locally, for instance, or lend exclusively to certain types of borrowers.

Those barriers are reduced, and in some cases eliminated altogether, for investors who are interested in expanding past the reaches of their local market.

With online lenders, it’s possible to fund flips in different cities within a particular region or delve into markets that may have previously been inaccessible because of their location.

Platforms are identifying and analyzing submarkets in larger cities where opportunities for investors might be going undiscovered.

Using tech, we can look at the market conditions of a major metropolitan area and pinpoint submarkets that may be successful, even if the general outlook of the market is distressed.

Aside from eliminating geographic obstacles, tech is enabling investors to borrow more toward their flip projects. With private hard money lenders, the loan-to-value ratios are often conservative, meaning investors might only be able to borrow a small fraction of the property’s value.

With online lenders, borrowers may be able to obtain a loan for up to 80 percent of the value of an improved commercial or residential property or up to 100 percent of renovation costs.

Every property is different, but compared to the terms a bank or a hard money lender may offer, online lenders have a distinct edge.

Tech’s impact is here to stay

It’s indisputable that technology has made a definite impression on the real estate industry.

Online marketplaces are utilizing tech to streamline financing for fix-and-flip deals in ways that haven’t been done before.

Looking ahead, I foresee tech continuing to mold the lending space for flippers. In terms of the bigger picture, the push toward innovation can only have a positive impact on real estate as a whole.

Nav Athwal is the founder and CEO of RealtyShares. 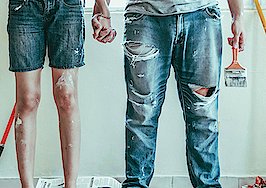 Gen Z flunks homeownership test — but other age groups not far behind
Back to top
Only 3 days left to register for Inman Connect Las Vegas before prices go up! Don't miss the premier event for real estate pros.Register Now ×
Limited Time Offer: Get 1 year of Inman Select for $199SUBSCRIBE×
Inmanpot
Log in
If you created your account with Google or Facebook
Don't have an account?
Create an Account
Forgot your password?
No Problem