Last week was what the military calls “target rich.” The first: Long-term rates on Wednesday broke out of the bottom of a range, 2.30-2.60 percent, which has held since November. The 10-year T-note dropped to 2.23 percent, taking low-fee mortgages almost to 4.00 percent.

Last week was what the military calls “target rich.”

The first: Long-term rates on Wednesday broke out of the bottom of a range, 2.30-2.60 percent, which has held since November. 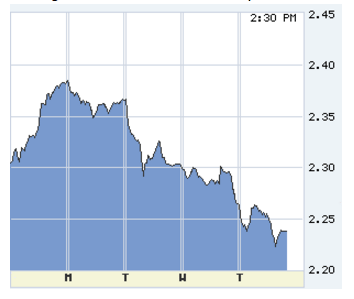 The 10-year T-note at the end of last week; the sharp break below 2.30% at the tag end of Wednesday trading. Markets were closed for Good Friday.

There is plenty of discussion about why the move has been down, instead of out the top, but the catalyst is perfectly clear: Donald Trump’s extraordinary 70-minute WSJ interview on Wednesday. 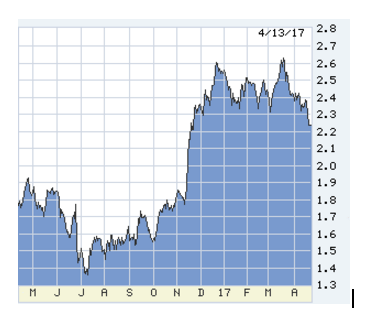 The 10-year in the last year. Note huge double-top-and-shoulders formation, and break of resistance at 2.30%, which in normal times would presage a significant drop. Not now: the Fed is coming. Note further: the 10s to 2s spread narrowed below 1.00%.

Sometimes we struggle to understand cause and effect in markets, but the rate improvement came instantly upon the last of these economic policy shifts:

It is almost always a mistake for the president to mention markets, the Fed, or especially the dollar. 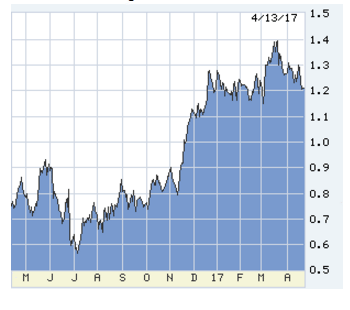 The 2-year T-note predicts the Fed. 2s have stopped pricing-in the Fed’s next .25% hike, but there’s nothing like the retreat in 10s. Expect the Fed soon to begin jawboning a hike at the June meeting.

Robert Rubin, Treasury Secretary under Clinton and previously the world’s best currency trader, set the standard. Say nothing but this, no matter what else may be going on: “A strong dollar is in the interest of the United States.”

Trump has his own unique style, not afraid to say things that might upset the tender-minded. This time — which everyone in markets hopes will not become a pattern of commentary — it worked. 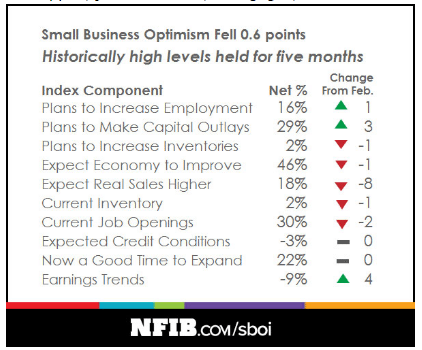 On the second Tuesday each month the NFIB releases its survey of small business.

To jawbone the dollar down is a help to China, and we could use China’s help right now. Saying the dollar is “too strong” in Trump’s mind is also an effort to help our exports, but that jawboning is often counterproductive.

There have been other matters pressing down on bond yields. 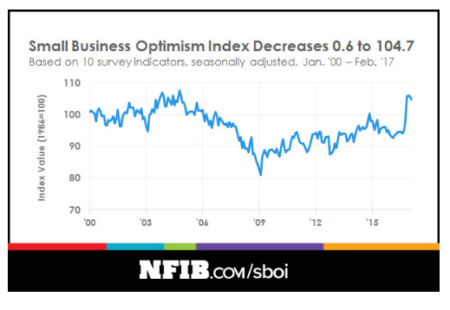 The pattern continues: post-election exuberance among the right-side NFIB membership but not at all confirmed by actual business conditions (note all of those red arrows). That confidence has topped, just like bonds, mortgages and stocks.

The big overseas central banks are still engaged in emergency easing. Just one month ago German 10-year bonds traded at 0.48 percent, and by yesterday had fallen more than in half, to 0.19 percent. If an investor, an insurance company, a pension fund needs yield — buy the U.S. 10-year. And they have.

Another big downward force has been the fizzle of new stimulus measures by the administration. Naming no names, awarding no blame, the Republican majority in both houses is too small to carry tax reform, tax cut, infrastructure spending or much of anything big.

The political spectrum as usual has a variety of opinion. However, we have moved from a several-year period of foreign policy quiet, if not necessarily in U.S. interests, to a period of high activity.

Maybe it’s just the U.S. pushing back in overdue fashion, powers jockeying for new position. Maybe it’s more serious. But there is so much worried and threatening talk that buying bonds is a good global idea for safety. And U.S. bonds are the safest.

Perhaps just as hard to quantify as conflict: The Fed’s intentions. Some very smart people think that the Fed has already overdone it.

David Rosenberg thinks a recession this year is a 90 percent likely event. But the Fed itself is insistent: We are not “tightening,” just removing excessive stimulus. Normalizing. And we’ve got at least another half-percent to hike this year.

If so, the 10-year T-note and mortgages cannot stay as low as they are. Assuming the world stays at peace, the most important thing to watch is Fed speakers hinting at action at the Fed’s June meeting.