When you hang around the industry long enough, you acquire brain candy well-suited for real estate trivia night or the lobbycon lull. These 10 morsels come from 1862 all the way through the 21st century.

When you hang around the industry long enough, you acquire brain candy well-suited for real estate trivia night or the lobbycon lull. These 10 morsels come from 1862 all the way through the 21st century. While unrelated, they knit together a story of power, influence and big and small scandals leading up to today, a unique moment in history when we have a real estate developer running the country.

Famous playwright David Mamet’s first job was as a clerk in a poorly run real estate office where he watched property salesmen peddle worthless land in Florida and Arizona. That inspired his Pulitzer Prize-winning play, Glengarry Glen Ross, about four agents scrambling for their manager’s leads. Mamet’s genius came through in his observations about people quietly performing their jobs, routinely facing indignities, as they worked hard to earn a living.

2. The first CEO of realtor.com went to prison

In the 1990s, the brilliant mastermind behind the staggering growth of realtor.com was Ph.D. Stuart Wolff, who rescued the National Association of Realtors (NAR) from a hot mess with its scandal-plagued Realtor Information Network (RIN).

In 1996, he brought in outside investors and took over running HomeStore, then the mothership of realtor.com. He drove the company ruthlessly from an interesting listing site to the portal powerhouse of the time.

But during the crazy dotcom boom, he crossed the legal line and wound up in prison after being accused of a variety of white collar crimes. Realtor.com never completely recovered from those dark days.

Co-founders Rich Barton and Lloyd Frink control Zillow. Because of the way Zillow shares are organized and owned, nothing can happen without their blessing.

For one, they more or less control who serves on the the board of directors. The two passionate leaders have vested authority in the executive team including CEO Spencer Rascoff, COO Amy Bohutinsky and CFO Kathleen Phillips, but the two horsemen Barton and Frink are the ultimate decision makers and have been rewarded handsomely for their company’s growth. Zillow’s market cap today is $8.2 billion, nearly double that of Realogy.

So if you want to acquire Zillow, talk to these two Seattle entrepreneurs first.

4. The largest property transfer in U.S. history was free

On May 20, 1862, the Homestead Act was signed into law, which accelerated the settlement of the American West by granting adult heads of families 160 acres of surveyed public land for a minimal filing fee and five years of continuous residence on the property.

Five hundred million acres were settled, but only 80 million went to actual homestead families, while the bulk went to speculators, miners, lumber companies and railroads. That first real estate scandal was followed by many more, including the housing market collapse in the 1930s, the mortgage redlining disgrace of the 1960s and 1970s, the savings and loan crisis and HUD scandals in the 1980s and the subprime meltdown 20 years later.

5. The Realtor Code of Ethics was based on the Golden Rule

First coined 101 years ago, the term “Realtor” identifies real estate professionals who are members of the National Association.

Members must subscribe to a Code of Ethics, which was crafted in 1917 by Charles N. Chadbourn, a past president of the Minneapolis Real Estate Board. He based the code on the Golden Rule, the principle of treating others as one would wish to be treated.

6. Inman News began because of a NAR scandal

In 1996, Inman News was launched when I covered the low-brew NAR RIN scandal and published a series of stories on the Internet.

The profession’s rank and file was seemingly ready for a fresh voice that was willing to publish unpopular stories about industry secrets. In that early coverage, a high-level industry executive, who thrives today, was the anonymous source for most of my reporting, giving me the inside scoop on shenanigans at NAR. My source, who I have never revealed, was motivated by the desire to make the powerful trade group more transparent with its members.

At a special NAR board of directors meeting to resolve the fate of the RIN mess, the president of NAR at the time reportedly had me followed into a Chicago hotel bathroom by a NAR staffer in an attempt to find out who my source was. The secret insider and I never met in a bathroom; the telephone worked just fine.

7. The ‘pursuit of property’ was almost in the Declaration of Independence

However, private property protection lives on through the 5th Amendment of the Constitution in the takings clause, ”nor shall private property be taken for public use without just compensation.”

8. In the beginning, NAR was formed ‘to unite the real estate MEN of America’

The early vision for the trade group was to “exert a combined influence upon matters affecting real estate.” That vision was certainly realized and ultimately united men and women.

9. Trulia’s co-founder Pete Flint did not really want to sell to his arch enemy

In 2014, Flint was paid handsomely for selling his company to Zillow at a sky high valuation of $2.5 billion.

Nevertheless, the affable English entrepreneur was not necessarily eager to merge his baby that he’d grown into a powerful portal. But Flint may have had no choice in the matter; an overlapping group of Zillow and Trulia investors, representing a majority of the outstanding shares of Trulia, purportedly let him know that merging with Z would be a good idea.

Out of the pressure cooker of running a fast growing tech company, Flint seems very happy with his adorable young family and his life as a venture capitalist.

The first modern federal income tax was created in 1894 when mortgages did not exist. All other forms of interest were deductible.

The Supreme Court, however, quickly ruled that the tax was unconstitutional. In 1913, the Constitution was amended and a new income tax was enacted. Once again, interest was deductible.

In the 1980s, credit card interest deductibility was wiped out, but the powerhouse NAR preserved the mortgage interest deduction. The trade group gets the credit for making sure the politicians never rub out this homeowner benefit. 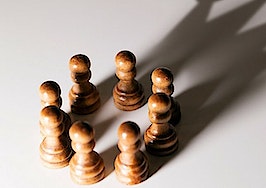 The next NAR CEO must be servant as leader

What's happening behind the curtain of Zillow Instant Offers