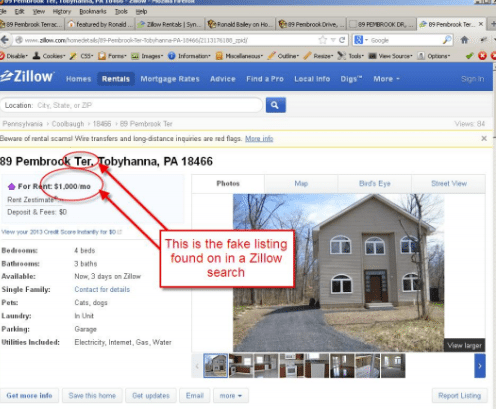 Ron Bailey can just picture it:  He’s showing a rental listing to some prospects when suddenly, a person he’s never met thunders, “Are you Ron Bailey?”

Then Bailey says, “Things would start to get ugly.”

That’s because, in this scenario, the menacing stranger would have sent a considerable sum of money to someone he thought was Ron Bailey. And while the stranger would have been expecting to receive keys to the property in return, he would not have heard from Bailey again — that is, until confronting Bailey while showing that property to other prospective renters.

The scene isn’t as far-fetched as it may seem. Recently, Bailey learned that a scammer scraped his rental listing and reposted it at a lower rent on Zillow, where the original listing was already posted. A prospective renter then found the fake Tobyhanna, Pa. listing posted on rental site HotPads — which Zillow owns and feeds listings to — and contacted the scammer.

After hearing from the renter, the scammer corresponded through email with her, using Bailey’s name, an email address with Bailey’s name in it, and a phone number bearing Bailey’s area code.

The person who exchanged emails with the scammer later told Bailey that she came very close to sending the money that the scammer asked for.

The case represents an unusually intricate listing scam, that escaped detection on a relatively reputable listing site, and hijacked the identity of a real estate agent.

After Inman News brought the case to the attention of the National Association of Realtors (NAR), the group’s general counsel, Laurie Janik, called it the most sophisticated listing scam that she’d heard of.

But in addition to possibly heralding the arrival of a new breed of listing scam, Bailey’s case also highlights a sometimes overlooked reality that may unnerve some agents: in addition to harming consumers, such scams may put real estate agents in peril.

In a testament to the jarring psychological impact such a case can have on real estate agents, the chairman of the Pocono Mountains Association of Realtors’ MLS (PMAR), Malcolm Waring, told Inman News that he was considering barring Zillow from posting the MLS’s rental listings, after discovering what happened to Bailey.

Janik said she has alerted all of NAR’s legal staff of the case, “so that they also are aware of the latest tactics.”

Waring later decided not to follow through with the threat after Zillow removed the fake listing at his request on Friday, the day he learned of it, he said.

“I’ve been assured that they’re going to beef up fraud prevention,” Waring said. But, he added, if he learns of a similar scam perpetrated on Zillow or HotPads again, “it’s going to be the last time.”

“I hope it doesn’t come to terminating all our sales listings too,” he added, noting that scammers also scrape and repost for-sale listings as rental listings.

She outlined preventative measures that include text-message verification for users who enter listings, notices posted throughout the site that warn of scams and a quality-control team dedicated to combing through listings to weed out fraudulent ones.

“We take these scams very seriously and we’re always analyzing and exploring new ways to stay ahead of this,” Nowak said.

Scams that involve hijacking listings to weasel money out from unsuspecting buyers — often by offering to send keys to a renter through the mail in exchange for money — are far from new.

They are pervasive on Craigslist, and have been for years. But many agents as well as consumers are keenly aware of Craigslist’s susceptibility to scams, and largely inured to it.

Bailey’s case, however, rattled Bailey and Waring partly because it involved Zillow and HotPads, which they previously viewed as highly resistant to scams.

Indeed, the incident appears to expose weaknesses in Zillow’s quality control, showing that a person only has to make minor changes to a listing to sneak it under the site’s radar. The scammer who impersonated Bailey did little more than change the end of the street address from “Drive” to “Terrace,” and remove the copy in the original listing.

The case also unnerved Bailey and Waring because of the lengths through which the scammer went to impersonate Bailey and paint a compelling story. He started by creating a fake profile on Zillow using Bailey’s name. Then, after hearing from the prospect, he responded with the email ronaldbailey689@yahoo.com and even included a phone number with the listing’s local area code in his email signature.

The story that the scammer fabricated was not your average “reverend that’s stationed in Africa” pitch, Waring said. “This is a new level. This is coming from the UK. They’re writing a little better.”

The scammer claimed that he had just moved to England for a new job, and after initially attempting to sell the home, decided to rent it, partly because the scammer’s listing agent’s fee was purportedly too high. The scammer also attached an application to a subsequent email, asking the prospective renter to fill it out.

Nevertheless, Bailey remains shaken up about the incident.

“With this person impersonating me and me not knowing what they’re out there saying, it’s a little scary,” he said. “I get tons of emails, tons of phone calls all the time … Honestly, until I show up, I don’t know who I’m going to meet.”

Waring added that what happened to Bailey shows that scams don’t just jeopardize consumers, “they are a risk for everybody.”

The images below were provided by Malcolm Waring.

Have you ever been the victim of a listing scam? Tell us about it in the comments section below. 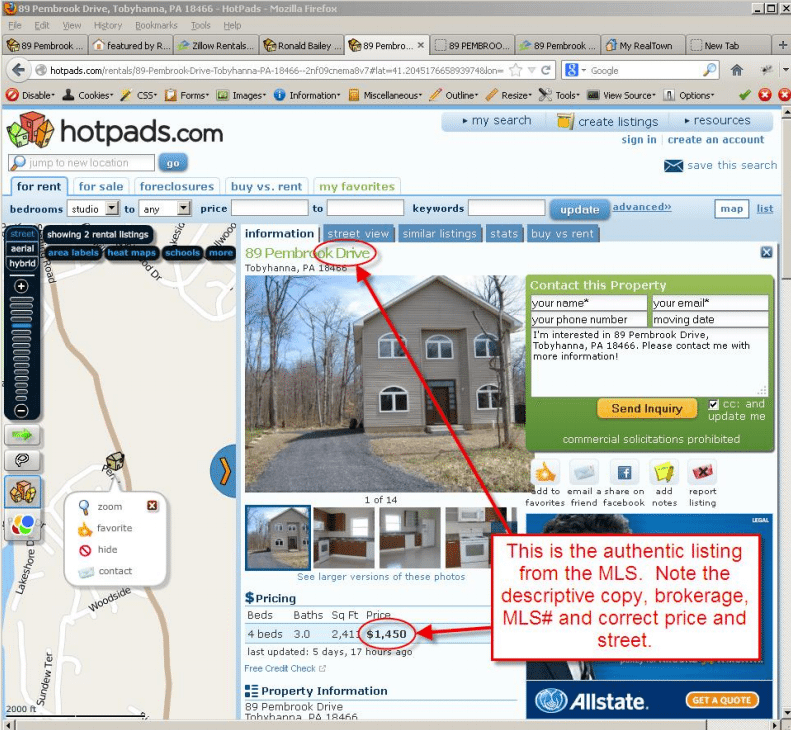 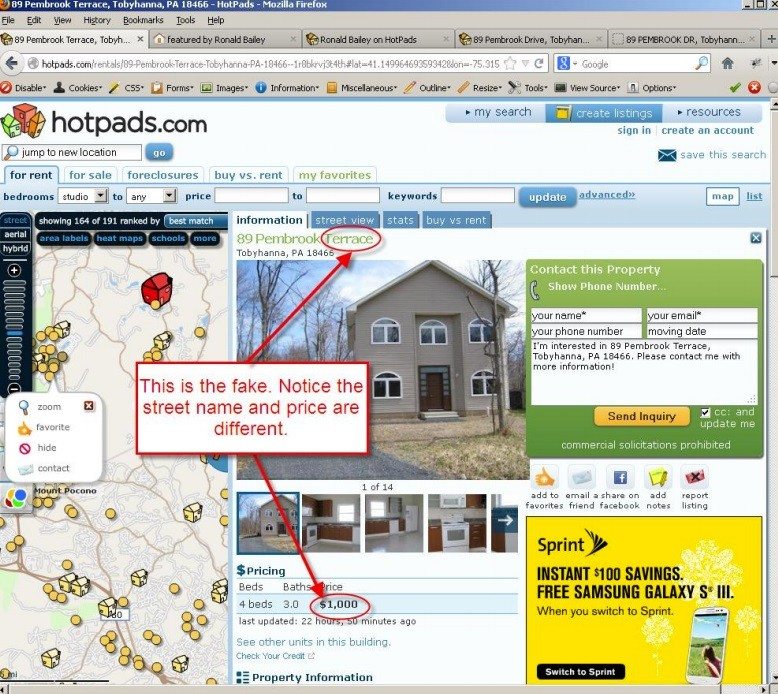 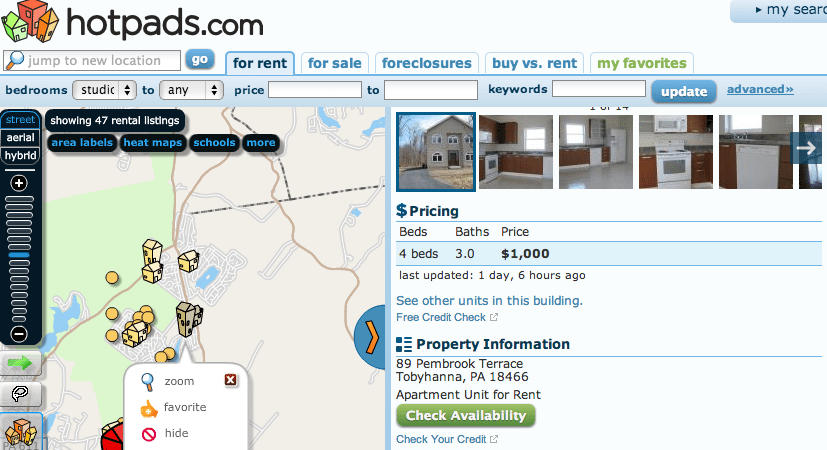 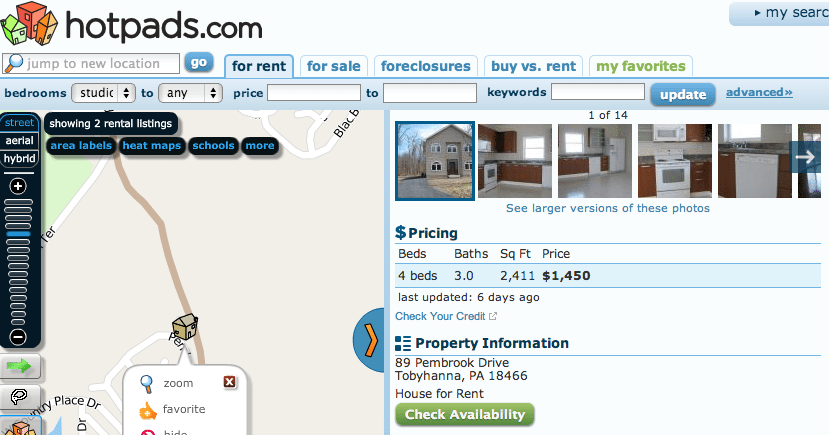 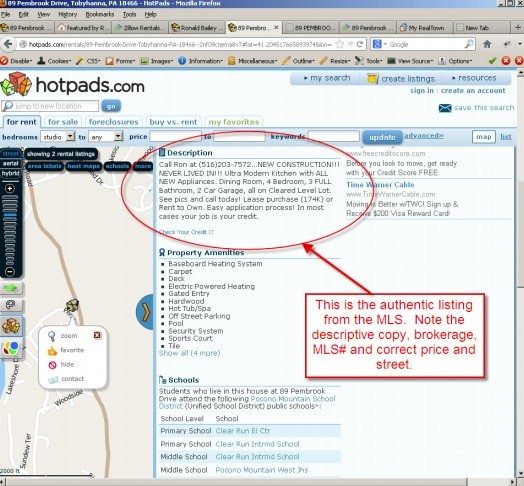 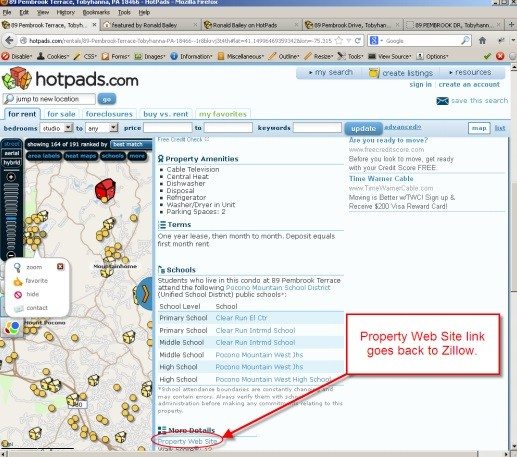 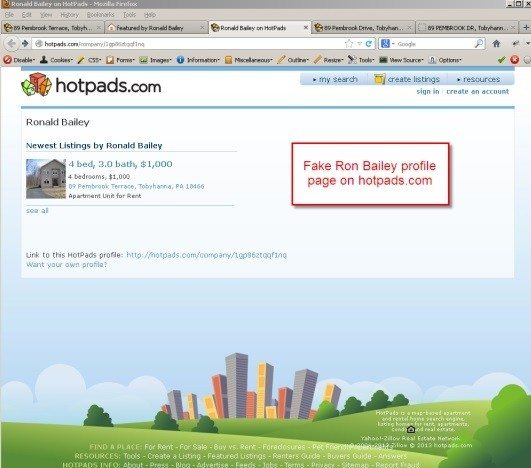 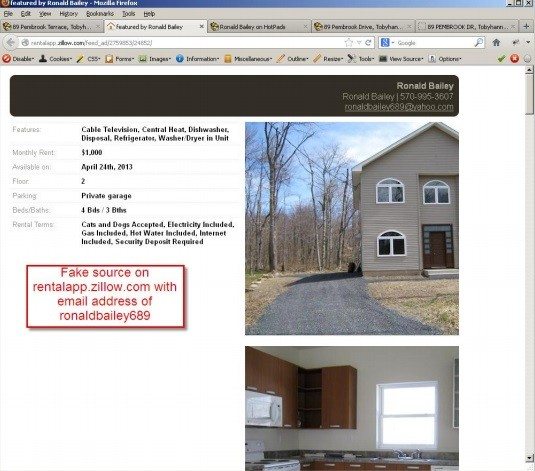 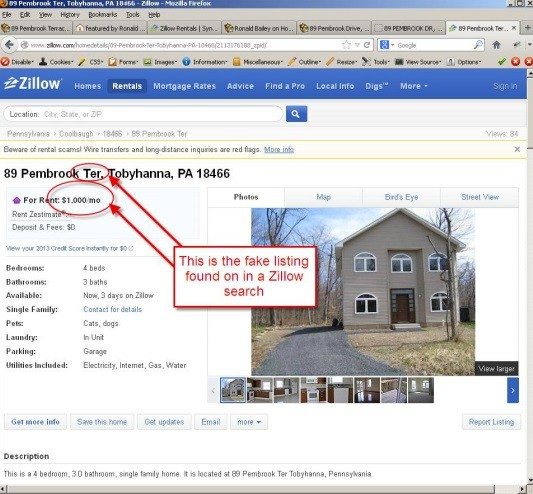 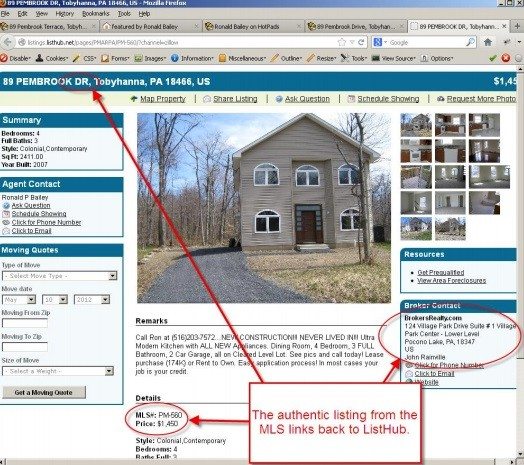