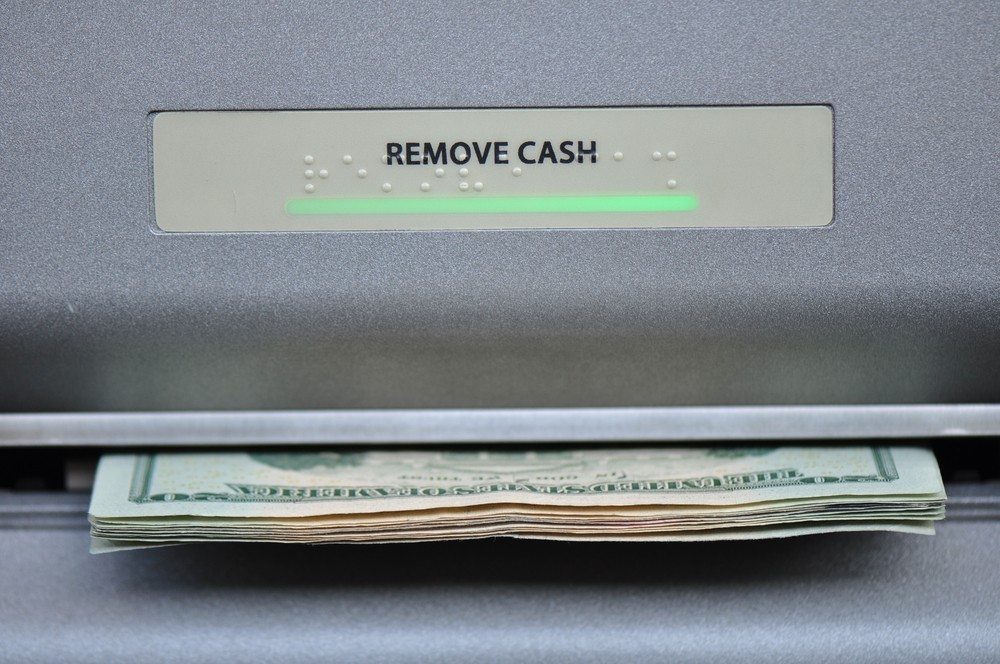 It was bound to happen with rising home prices.

Didn’t get a raise? Working two jobs to make ends meet and need cash? If you own a home, you may be in luck. That same old home that you bought years ago is worth more today than it was last year. Your house hasn’t become more productive and most likely has depreciated, but it’s worth more and that means you can margin your used home to cash in.

The constant barrage of media reports of a housing “recovery” have sunk in. Home sellers are as optimistic as they have been on the upward trajectory of home prices since 2007 — just before the big plunge.

HELOCs peaked in 2006 at nearly $500 billion, then dropped to less than $100 billion in 2010 and 2011. While home equity lending is still far below its peak during the housing boom, it’s ramping up. HELOCs rose 8 percent in the first quarter this year.

Rising home prices spurred on by artificially low interest rates have led to a rebound in HELOCs, but low home sales have Washington worried. To stimulate home sales, Fannie Mae and Freddie Mac are planning on relaxing lending standards.

With year-over-year double digit percentage home price increases, an increase in HELOCs and lower lending standards on the way, all the elements are in place for another housing bubble.

But this time it IS different

This time it is different. The housing mania is not widespread. While home prices are bubbly, home sale volume is flat or declining. Between 30-50 percent of the homes sold in the past few years have been purchased by investors for cash. Some of those investors are large public companies like Blackstone. Unlike the housing bubble of the mid-2000s, this is Wall Street’s bubble, not Main Street’s.

In the mid-2000s, prices were too high, but there was no shortage of buyers. Existing-home sales were about 7 million in 2005, and about 1.5 million new homes were sold that year. In 2013, existing-home sales dropped to about 4.5 million and new-home sales plummeted to about 400,000. First-time homebuyers represented about just 27 percent of the existing homes sold in 2013. 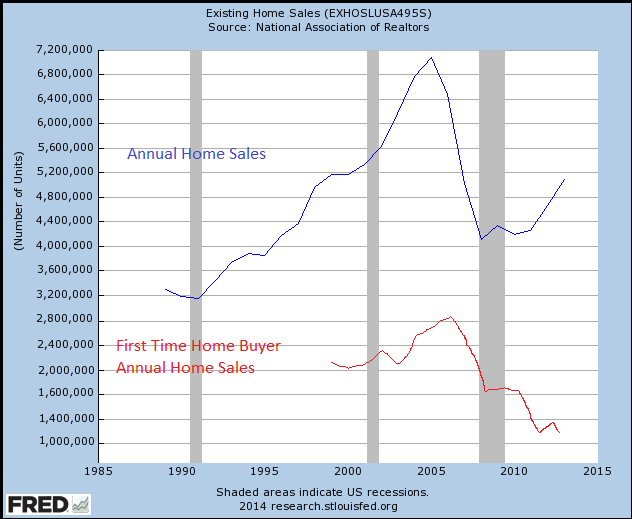 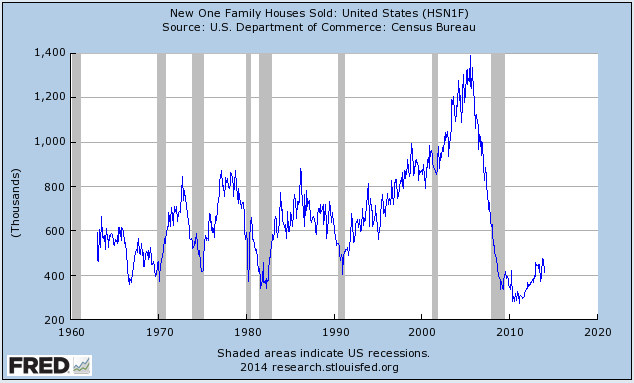 As such, with fewer home sales the comparable home valuations today are less trustworthy than even the nosebleed valuations of the mid-2000s. It’s harder to justify what a home is worth with few comparables. If sales volume picks up, it may be on lower prices. If that happens, those with recently obtained HELOCs may be in for a rude awaking.

The charts below show that as more inventory hits the market, prices haven’t dropped (yet), but sales have. 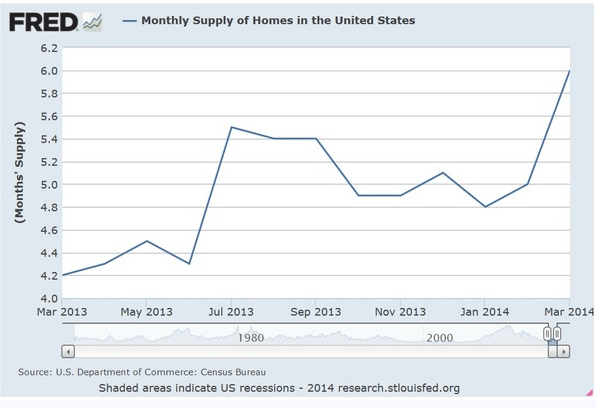 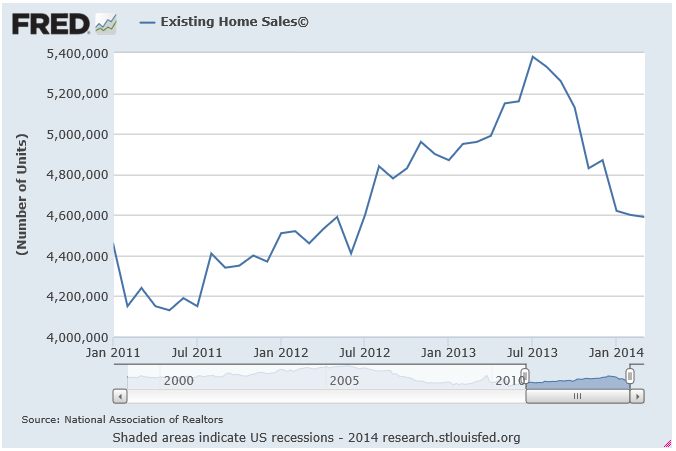 … while home sales are falling.

Ineffective attempts to boost the economy

The Fed’s quantitative easing (QE) program that involves buying trillions of dollars worth of mortgage-backed securities and U.S. Treasury bonds to lower interest rates was designed to encourage people to borrow money to buy homes and boost home prices so people would feel wealthier and spend more money. People moving in and out of used houses and borrowing money from those homes’ increased “equity” — and spending it — is an ineffective way of boosting the economy.

Nothing new is produced in the process of boosting home values. No new service or good is created when home prices are pushed higher. Advocates of Fed policy argue that production is stimulated to meet the demand created by consumers who have more money (or at least feel richer) to spend due to rising home and stock prices.

Increased spending in the United States, however, often means buying goods made in other countries, like China. The production stimulated occurs overseas and creates manufacturing jobs there. The United State trade deficit at $47.2 billion, a two-year high, is evidence of the U.S. consumer appetite for foreign goods.

Yet monetary policy is consistently geared towards stimulating demand rather than production. The manipulation of interest rates lower and of government programs to make homes and share prices worth more is designed precisely to achieve greater spending of borrowed money on foreign goods. Such a policy does nothing to create job growth or increase domestic productive capacity.

Historically, low interest rates haven’t “fixed” the economy, even though homes prices have risen, because according to the central planners, there are not enough homes being sold because they are too expensive. Rather than admit the senselessness of their manipulation that caused home prices to rise beyond affordability, they try more manipulation and conspire to lower lending standards so that unqualified borrowers can overpay for used homes so that higher home prices can be sustained so that more people can achieve equity and borrow against it so they have more money to spend on foreign goods. Makes sense?

Policies designed to boost home prices are destined to fail as home prices need to find a market price that people can afford. If homes are unaffordable, prices and sales will decline and the much touted housing recovery that never was will be officially over and all that newly created home “equity,” once again, negative.

The Dark Side or Artificially Low Interest Rates

The Dark Side of Rising Home Prices

The Housing Recovery That Never Was, is Over

Nearly half of modified mortgages facing rate increases are underwater
Back to top
Only 3 days left to register for Inman Connect Las Vegas before prices go up! Don't miss the premier event for real estate pros.Register Now ×
Limited Time Offer: Get 1 year of Inman Select for $199SUBSCRIBE×
Inmanpot
Log in
If you created your account with Google or Facebook
Don't have an account?
Create an Account
Forgot your password?
No Problem