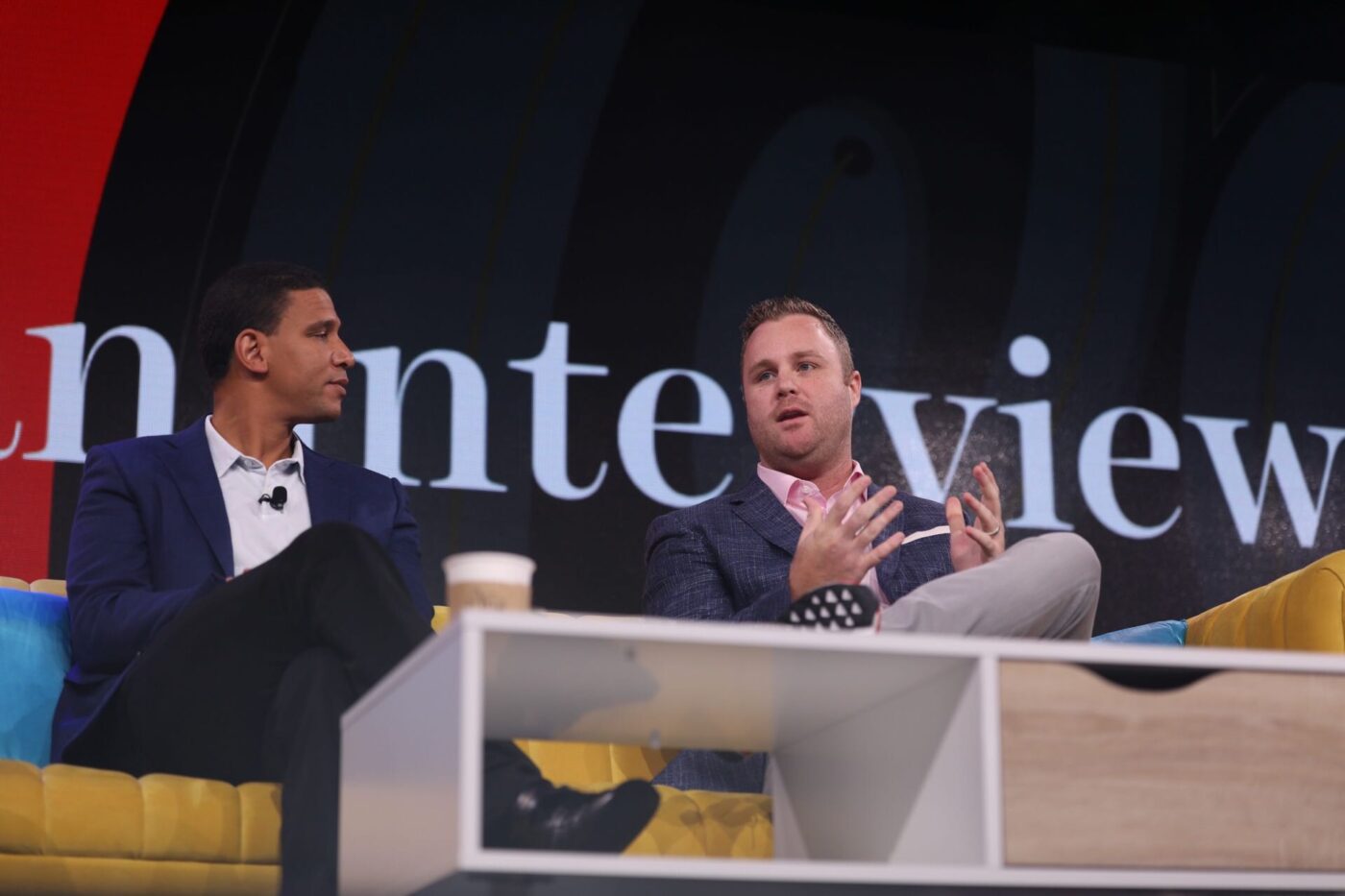 The most important industry discussions are happening at Inman Connect. Don’t miss your chance to debate, define and discuss the future of real estate at the next Connect in New York, January 28-31. With hundreds of speakers, engaging sessions and not-to-miss networking events, Connect provides unlimited opportunities for agents and brokers to cultivate and grow their business.

Keller Williams Realty President Josh Team said Thursday during an Inman Connect panel that his brokerage is investing $1 billion into technology before directing a jab at Compass CEO Robert Reffkin: “Not buying marketshare.”

During a discussion entitled “The Inman Interview: Can Your Technology Compete?” Reffkin touted purportedly unrivaled engineering talent and Compass’ vision of building a first-of-its-kind property search platform. Team countered that Keller Williams is already delivering top-shelf technology to its agents.

The two executives never directly disparaged each other’s firms. But they traded some thinly-veiled barbs.

“This isn’t hyperbole or vision,” Team said about Keller Williams’ tech platform, implying that Compass’ is just that. “This is real.”

Keller Williams’ suite of tools combined with its integration of an in-house lender is helping agents guide customers from the time their contact information arrives in a database to the moment they order an appraisal, he said.

His brokerage is “basically allowing technology to replace the functionary work agents already do, so they can focus on being fiduciaries.”

Compass has long touted technology that it says offers similar convenience to its agents. Its products include a collaborative search tool for agents and their customers; marketing and design software; analytics on listings traffic; and a customer relationship management system. Yet the brokerage has repeatedly been accused of exaggerating the scope and quality of its technology.

“What we seek to build is the first site in the country where agents can search at the same place as their clients,” Reffkin responded.

Reffkin repeated that he meant that agents should be able to search listings in the same place as their clients. “Agents should have everything they love in one place,” he added.

For Compass to pull this off, Peters pressed, it would need to drive a lot of consumer traffic to its website.

“How is that different,” she asked,” from a consumer, for instance, just looking on Zillow?”

Reffkin answered that Compass wouldn’t need consumer traffic for its tech platform. “Practically, what it [Compass platform] means,” he later added, “is you should have to log into one company.”

Reffkin didn’t provide additional clarity. But he repeated that the company didn’t need website traffic “at all” to provide a platform where both agents and their customers could hunt for listings.

His downplaying of a need for consumer traffic seemed to contrast somewhat with a goal that Reffkin described in January: “80 percent of active buyers start their home searches on Compass.com because of listings only available on Compass.”

Asked how to reconcile Reffkin’s panel comments with this objective, Compass spokesman Jason Post said, “that misses a nuance that we are seeking active buyers — a much smaller subset of all traffic.”

The conversation then returned to Keller Williams. In what seemed like a reference to Reffkin’s portrayal of Compass’ tech vision, Team asserted that searching listings isn’t a “pain point” for consumers. Neither, he added, is “agents getting access to inventory and listings.”

The real pain points, he suggested, are a range of other tasks that agents must perform. Keller Williams’ strategy for curing this pain, he said, is to make these tasks possible to complete in five minutes. He said Keller Williams has already achieved this for tasks including generating direct mailers and social media campaigns.

Team went so far as to claim that Keller Williams has “more people signing into our system every hour than almost any of our competitors have” in their ecosystem.

“Yes,” Team said, teeing up a jab. But “our billion is going into technology; we’re not buying marketshare,” he said. The remark was an allusion to the common complaint among competitors that Compass mostly uses its capital to snap up brokerages and top-performing agents and teams, rather than build groundbreaking technology.

The dig resonated with some audience members, touching off applause and some whoops.

Since both firms have huge war chests, the question of which firm can develop the best technology may boil down to talent.

Keller Williams, Peters suggested, seems to be at a disadvantage on this front. Engineers typically want to join up-and-coming startups that want to go public, she said — a profile that Compass meets, but Keller Williams does not.

Team acknowledged that this is the case with some engineers. But there are plenty, he said — including himself — that are drawn to the concept of changing “how 10 percent of Americans buy and sell homes.” Keller Williams’ team includes engineers that worked on IBM Watson and at SpaceX, he later added.

Reffkin suggested the he believes that, as Peters said, Compass does have a superior ability to attract tech talent. He noted that Compass had snagged the chief technology officer of artificial intelligence from Microsoft.

“I do think one of the challenges of brokerage firms is: Can they attract the best talent?” he said.

Reffkin acknowledged that “it took us a long time to have the engineers at the company understand the industry.”

But he later added that “being first doesn’t mean much.” Facebook, Apple and Google weren’t the first companies of their kind, he said.

But Team disputed this notion.

Actually, Microsoft invented the touch screen, Reffkin countered. Winning companies, he suggested, often perfect the application of existing technologies, rather than invent them.

So, Peters asked, was Reffkin suggesting that Compass is the “Apple of real estate?”

Reffkin paused, chuckled and dodged: “Do you want a headline?”

Post, the Compass spokesman, told Inman after the discussion that:

“The most revealing and interesting part for Robert [Reffkin] was the discussion of the competition for engineering talent (which Clelia nailed as the key to this going forward).”

And Team’s thoughts on the conversation?

He said in a statement that he hoped that people would walk away with the understanding that: “We’re not just casting vision on building a seamless platform. We’re actively rolling it out.”

He added: “And our technology is winning awards inside and outside our industry and that’s due in large part to our world-class engineering and technology team.”