The information technology revolution continues to break old assumptions behind economic modeling. We’re in uncharted waters — though the leaders at the Federal Reserve have some theories and data.

Long-term rates fell this week from the highest week since July. Not a lot: the 10-year T-note from 1.94 percent to 1.83 percent, and mortgages safely back to 4.00 percent or slightly below, but it’s a significant signal that a decline ahead is more likely than an increase.

So, what is next? What to tell homebuyers and sellers, often reluctant to proceed if rates seem likely to go up or down? And those who would refi, who missed the single-day bottoms on the fourth day of September and October — and who feel gypped because the Fed cut its rate but mortgage rates rose?

Take evidence from as many angles as possible, and future probability will lie somewhere in the middle. Start with the Fed, as always.

The Fed cut the overnight cost of money on October 30th, its third cut this year a surprise to no one, in total from 2.25 percent to 1.75 percent. The day after the cut, the 10-year T-note was 1.69 percent and promptly — in eight days — straight-lined up to 1.94 percent.

Thanks, guys. Your rate cuts are a big help to us out here.

It’s not nice to be ungrateful. The market move made perfect sense in market logic. The Fed made very plain on the 30th that the third cut was the last to be expected. Market logic, which feels like a bizarre joke: Mr. Powell, if you’re not going lower, then at best you will stay put but may go back up, reversing your “mid-course correction.” Thus it is no longer wise for me to buy or hold long-term bonds.

Federal Reserve Chairman Jerome Powell spoke to Congress this week and emphatically reversed the market’s misinterpretation. The Fed is on hold, and it will not cut again without some new sign of economic weakness, but it will not hike again unless inflationary mice land on the moon.

Powell dismissed any risk of inflation from economic overheating in any form: low unemployment, wage-based, or too-fast growth. Inflation could reappear as a result of global monetary stimulus and require Fed action, but the risk is the opposite: global central banks may be unable to push inflation up to the standard 2 percent target.

Now it’s safe again to buy and hold bonds, and so market rates have fallen.

Rate drops will depend on the trade war, technology and overseas weakness

But, how far might rates go down? That will depend on the two key forces which Powell has emphasized: trade war and overseas weakness. The two are not the same things. Independent of U.S. tariffs, the global economy is under pressure from the predatory export behavior of Germany and China, Germany’s Europe-killing fiscal stinginess, the structural end-game in Japan, and the powerful disinflation from IT.

U.S. trade policy has turned markets into Pavlov’s dogs. When a deal seems likely, we salivate. When a deal seems remote, we are cotton-mouthed. When we think of another tariff spasm, we sell everything. But even well-trained market canines become bored.

Only a new load of tariffs will push rates back down to the lows, and even that is unlikely given an election year and the Kyiv Kaper distracting the White House. A real deal and tariff reduction aiding economies — as opposed to standoff-and-pretend — is extremely unlikely as each of the adversaries requires public surrender by the other. Ain’t gonna happen.

The best chance for a substantial rate-drop is downward pressure on inflation from IT. Here is a small example of continuous and ubiquitous deflation-inducing disruption.

Last month, I bought warm socks from Amazon for my always-cold wife. Too big. To Amazon for a return label. Instead, a QR code and instructions to take the socks to our closest Whole Foods customer service desk and flash the i-phone QR.

Neat. But watch the ripples. Packaging stores, previously the easiest return portal will permanently lose volume. As will UPS, FedEx or whoever the carrier used to be. The cost to the customer falls, as trips to Whole Paycheck have no incremental cost. The return cost to Amazon falls also: grocery customer service has unused spare time, and returns will be bulk-shipped back to Amazon, not onesies.

These IT effects have vectors for overseas contagion. Despite tariffs increasing the cost of imported goods from China, in the last year aggregate import prices have fallen 3 percent. And the prices of U.S. exports have fallen also, by 2.2 percent.

All of this has been a mystery to central banks trapped in backlook models and genetically engineered to fear as Enemy Number One a return of the 1960s-1970s spiral of inflation. As a group in the last 20 years they have looked like a parade of Elmer Fudds dressed in Obviousman! T-shirts and boxer shorts. They are certain that wascawy wabbit is here somewhere, and so blaze away at phantoms, as did the ECB 2008 and 2011 and the Fed last year

Powell to the rescue. Any Fed junkie reading Fed speeches knows that half of the twelve regional-Fed presidents opposed all or some of the Fed’s cuts since summer. These cuts are Powell’s personal work, as is the tilt to lower now which he made clear this week. His skepticism of the old models now dominates the Fed, and he’s getting support from Fed research staff.

Recommended only for self-abusing civilians: “The Global Equilibrium Real Interest Rate.” The author, Fed Deputy Director Michael Kiley pulled global data into the “neutral rate” discussion for U.S. policy. His work suggests that the after-inflation, “real” neutral rate neither stimulating nor slowing the economy today is below zero — not at zero or slightly above as the Fed majority estimates, or higher as claimed by Fed hawks.

The Fed cost of money now sits at about the same rate as inflation, at 1.75% a zero real neutral rate. Even inflation-doubting Powell said that 1.75 percent is slightly “accommodative,” meaning easy and economically simulative. But, if Kiley’s work is correct, and neutral is minus-one-percent, the Fed’s cost of money is still too high by one percent.

The 10-year T-note in the past three years shows two lows at 2.00%, in 2017 and again this year, and the fall below 2.00% in August. It is important that the market after falling below 2.00 pecent has not been able to rise back above: 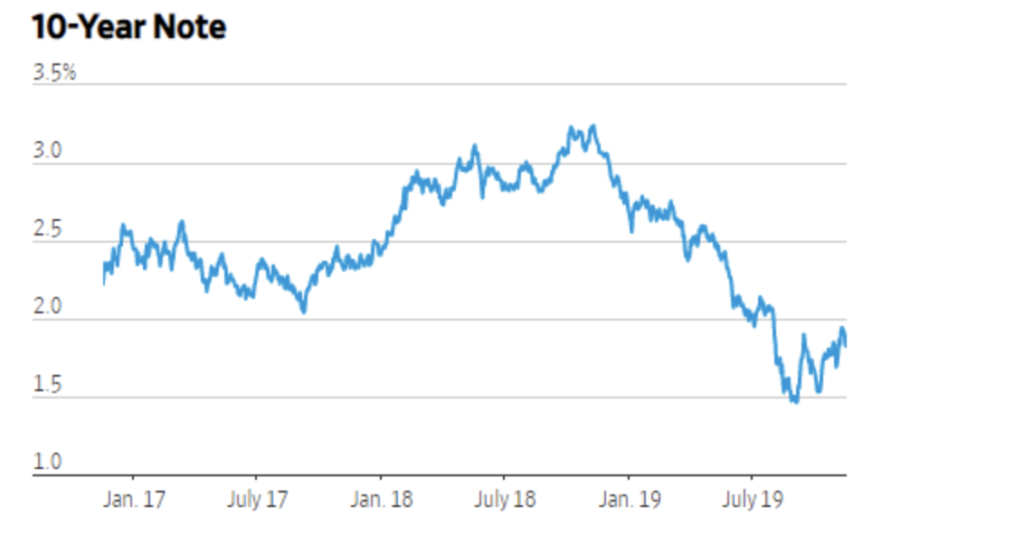 From the NYFed, its quarterly survey-based estimate of household debt (BTW: it tends to be high-side versus the actual nose-counting in the Fed’s Z-1 report). There is little growth at all in mortgage or credit card balances, ongoing contraction in home equity lines, and auto and student loans are stabilizing.

If the economy does slip into a downturn it will be shallow. Downturns become deep because too much money has been borrowed during the economic expansion.

This chart below shows that from onset of the Great Recession, there’s been very little credit expansion throughout the entire recovery period, unlike all economic expansions since the 1960s: 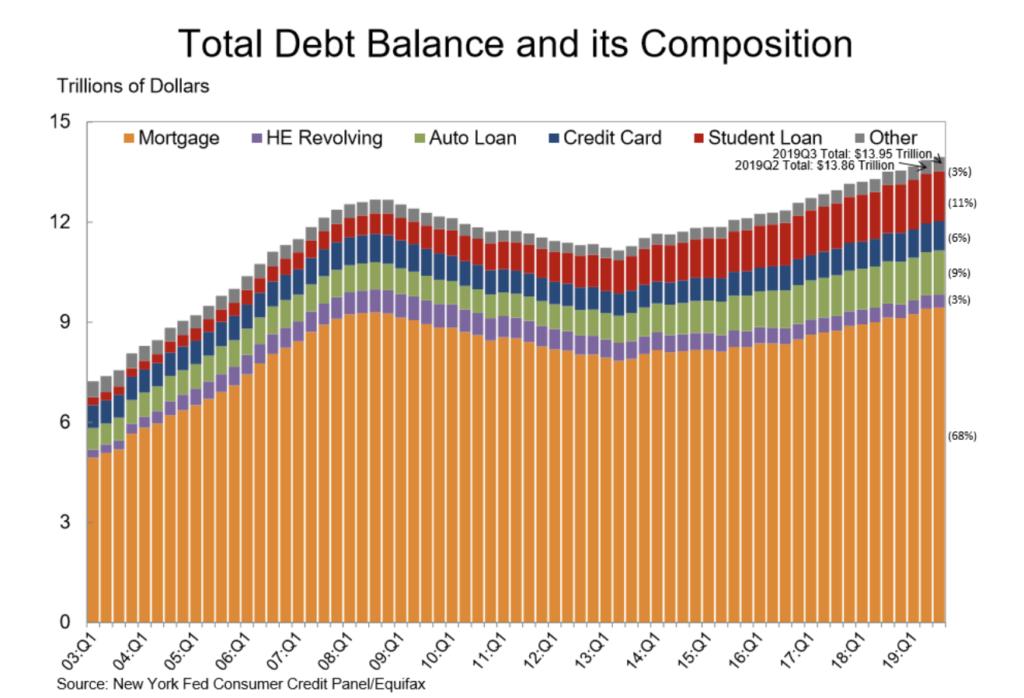 Chair Powell’s insistence that we need not fear overheating may be more correct than he intended. The Atlanta Fed GDP tracker nosedived in today’s update: