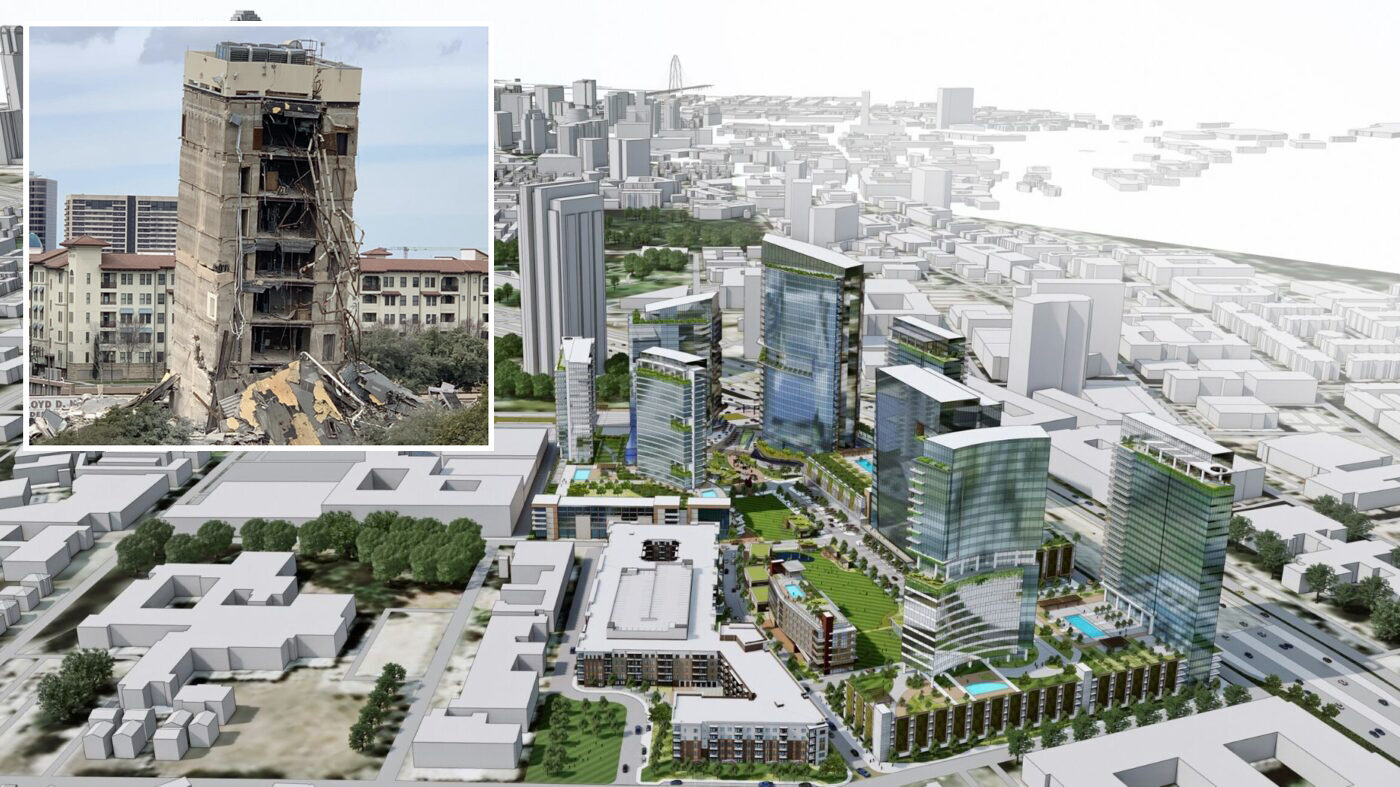 Two days after the planned demolition of the Affiliated Computer Services building on Haskell Avenue in downtown Dallas on Sunday, one pesky piece of the 11-story tower remains standing, the Dallas Morning News reported.

Although most of the building collapsed in an implosion on Sunday, the core of the tower, containing a stairway and an elevator shaft, is still standing — though not as straight as it used to — Dallas Morning News reporter Nataly Keomoungkhoun confirmed with Inman on Tuesday.

A spokesperson for Lloyd D. Nabors Demolition told Inman that this was “something we anticipated could occur in our original demolition plan.” The spokesperson said that, “In certain instances, especially in the case of older buildings with all concrete and steel core construction, the building core and elevator shafts require additional demolition measures.”

Lloyd D. Nabors Demolition plans to finish the job later this week with a crane and wrecking ball, but in the meantime, the people of Dallas are having a grand time with the city’s new “Leaning Tower of Dallas.”

The not-quite-complete demolition had been scheduled in order to clear space for a new $2.5 billion mixed-use project just north of downtown Dallas called The Central, by De La Vega Development.

The expansive project will eventually sit on 30 acres of land at U.S. Highway 75 and Haskell Avenue and contain 5 million square feet of office, residential, hospitality, food and beverage, entertainment and retail space, as well as a 3.5-acre park.

“We want to make this project very much nature-oriented with as much green space as we can,” Artemio De La Vega, president and CEO of De La Vega Development, told Dallas Morning News.

Phase One of the project will include a 17-story, 35,000-square-foot office building, a 320-unit high rise and a 430-unit low rise of residences, a 300-room full-service “lifestyle” hotel, a 150-room limited-service hotel and 110,000 square feet of restaurant and entertainment space.

The project is reflective of Dallas’ status as a leading metro area for building rental units. In 2019, the Dallas metro area issued 17,434 multifamily building permits, according to a report by RealPage.

Several architects have been working with De La Vega over the past five years to shape the project, including Dallas firms GFF Architecture and BOKA Powell, as well as New York-based Perkins Eastman.

Once complete, The Central will be one of Dallas’ largest recent developments, in line with other projects like the Union Dallas development in Uptown, which holds 800,000 square feet of office and residential space (and recently sold for $370 million) and Trammell Crow Co.’s Park District mixed-use project that contains 900,000 square feet and cost nearly $400 million.

If all goes according to plan, The Central will be the tallest and most dense development between Dallas’ North Central Expressway and Ross Avenue. De La Vega is also in talks with Dallas Area Rapid Transit (DART) about potentially expanding its underground Cityplace commuter station, according to Dallas Morning News, thereby giving the area direct access to Dallas’ light rail system.

Although the excitement over the #leaningtowerofdallas may come to a close soon — and it will still be years before the new buildings at The Central will be open — the site will not remain quiet for long.

“This site is blessed with a ton of infrastructure, and it’s under-used in my opinion,” De La Vega said. “This area I think has the most potential of all.”

A castle on the banks of the Mississippi comes to market