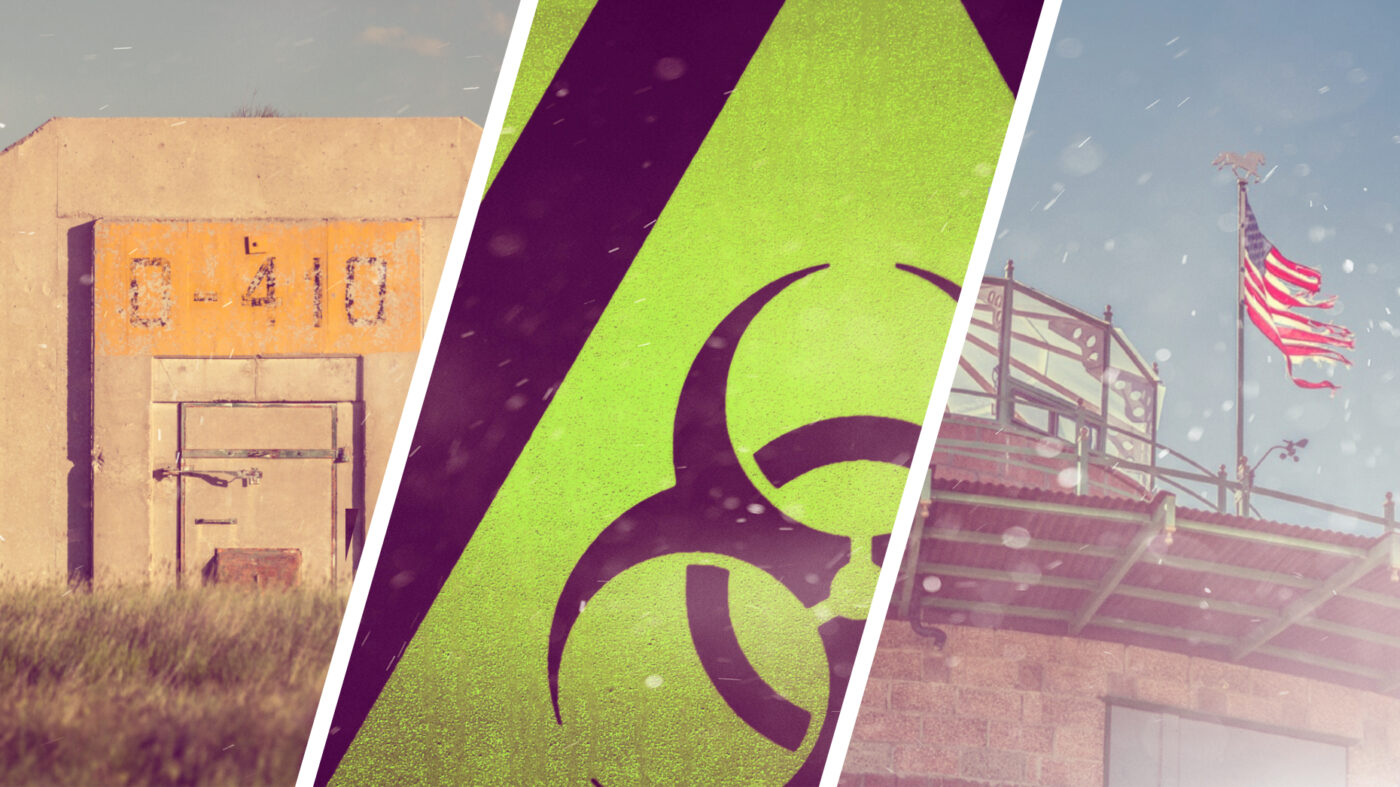 The panic buying started in earnest earlier this month.

All of which is to say, the coronavirus made doomsday-ism mainstream.

While it’s not unusual for people to stock up on supplies before a disaster such as a hurricane, the scope of what’s going on right now is remarkable. Reports of long lines and waning supplies have, for example, come in from California, New Jersey, Hawaii, Oregon, New York, Washington, Arizona and numerous other places. And of course this is all on top of the now weeks of disarray the coronavirus has caused in the world’s financial markets.

So far at least, most of the budding coronavirus survivalism has been focused on hoarding supplies. But taken to its logical conclusion it is, essentially, a real estate issue: If you really want to avoid a global pandemic, some people have long concluded, you have to get off the grid. And that means finding property.

To understand if the coronavirus is already affecting real estate decisions, as well as what exactly people want when they go off the grid, Inman reached out to a number of professionals who work with survivalists, or “preppers” as they’re sometimes called (though some members of such communities shun those labels). And the takeaway is that while there isn’t yet a mass exodus from cities to U.S. wildlands, the coronavirus is in fact already driving interest in remote property.

One of the providers already seeing a spike in coronavirus-related inquiries is Vivos. The company operates a number of shelters across the world, including an off-the-grid community of bunkers on a former military base in South Dakota. Vivos describes the South Dakota property as “the largest survival community on earth.” Would-be members of the community can either buy an entire bunker, or a slot in a communal space.

Vivos spokesperson Barbi Grossman told Inman that the coronavirus is driving a “huge surge in activity” for the company’s services and property.

“As a result of the current coronavirus threat and the ripple of subsequent consequences,” Grossman said in an email, “the demand for Vivos has exponentially grown, with people no longer inquiring on a curiosity point of view, but now ready to get off the proverbial fence and secure a space [while] they still can.”

Bunkers on a hillside at the xPoint community. Credit: Vivos

Grossman explained that some Vivos members only use their shelters in times of crisis, while others live in them full time. Either way though, the units are supposed to be a “Plan B backup plan” for “if and when all hell breaks loose,” she said.

And demand for the product is rising during the spread of the coronavirus because, Grossman added, “many foresee the very real potential for another plague” or other various dire situations such as economic collapse.

The interior of a bunker at the xPoint community in South Dakota. Credit: Vivos

Not everyone is seeing “exponential” growth in inquiries about survivalist-friendly properties, but there does seem to be an uptick in interest in other parts of the country as well.

Jake Rasmuson is a real estate broker in Bishop, a town in California’s Sierra Nevada mountains that serves as a gateway into Yosemite National Park. Rasmuson currently has a listing for an 8,000-square-foot Nevada house, dubbed “the Castle,” that he has in the past described as a “doomsday prepper dream home.” The property has 16-inch thick concrete walls and is entirely off the grid; it uses solar and wind generators for electricity, and collected rain for water.

Rasmuson told Inman that the Castle is also located in the least densely populated county of already sparely populated Nevada.

The Castle is a self-sufficient property in a remote part of Nevada that is currently listed for $599,000. Credit: Jake Rasmuson

According to Rasmuson, the Castle’s listing website has seen an uptick in traffic from February to March. The uptick so far hasn’t been huge, but he suspects that many people who are concerned about the coronavirus and interested in those kinds of off-the-grid properties are laying low and waiting to make their move.

“My suspicion is that once the coronavirus is done then we’ll see a huge influx of buyers,” he explained.

The interior of the Castle. Credit: Jake Rasmuson

For Gary Lynch’s company, that huge influx is already happening. Lynch is the general manager of Rising S Company, which among other things manufactures and sells underground bunkers. A small, 500-square-foot bunker might cost around $150,000, though the sky is really the limit, and Lynch is currently designing a shelter for a client who wanted more than 19,000 square feet of space.

Lynch told Inman that the coronavirus is indeed driving interest in bunkers and shelters, and that the illness has “really got people concerned” and “wanting a place that they can go and quarantine themselves.”

“Buying a bunker is like buying an insurance policy, you don’t plan on getting sick but you know it’s a possibility,” Lynch said, adding that in the past his company’s bunkers have tended to boost property values by more than they cost to install.

Lynch has seen an even bigger surge in demand, however, for his other products. In addition to underground shelters, Rising S Company also sells air filtration systems that can be installed on dense urban housing such as apartments. Lynch said the units are popular where there isn’t space for underground shelters, and he recently had an order for 1,000 filters from a single customer in Japan.

“What I’ve really seen an increase in, astronomically, is the amount of air filtration systems we’re selling,” he added.

Lynch suspects the filtration systems are selling quickly because many people facing the threat of the coronavirus are in cities, and don’t have the ability to self-quarantine in a remote area.

The people who can afford to really go off the grid, however, are generally looking for specific types of real estate. Rasmuson said that in the past he has worked with a number of unorthodox properties, including an entire ghost town, that drew interest from survivalist-type buyers. In general, people in that demographic see privacy and seclusion as paramount.

“You get a lot of individuals who would just prefer to be completely self-sufficient,” he explained.

The properties those individuals are drawn to also don’t usually qualify for conventional financing, which Rasmuson said means buyers have to come with cash. And that in turn means they tend to be older and more affluent.

The Castle is located in an extremely remote part of Nevada. Credit: Jake Rasmuson

As the coronavirus has spread, some real estate agents have also made it a prominent part of their messaging. Black Rifle Real Estate in Northern Idaho, for example, describes itself as a brokerage for “patriots, veterans, first responders and fellow preparedness minded (sustainable living) folks and families.” Significantly, the company’s website prominently features a “coronavirus update” on its homepage.

“How can we help?” the coronavirus update asks. “After you have determined to take action simply call or email us. The worst case scenario? You get stranded behind a quarantine line in a Sanctuary City. The Best care [sic] scenario? You buy beautiful property and never need it. You enjoy it as an escape from the city while making memories with the family for many years to come and then sell it.”

Black Rifle did not respond to a request for comment. But the company is one of several Inman identified and reached out to that explicitly cater to real estate buyers who want to go off the grid, and which are foregrounding commentary about the coronavirus, global pandemics and various socio-political threats.

Jake Crites — a real estate agent who specializes in rural northern Arizona land — has in the past worked with clients who have concerns about those issues, and who he said might broadly be considered survivalists or preppers. Crites told Inman that when working with such clients, the location of a property is often more important than what’s actually on it.

“Sometimes they don’t even care if it has improvements on it,” Crites said. “Sometimes it has cargo containers or a small cabin. Those are a plus.”

Crites has been working in Arizona real estate for decades, and at any given time may represent as many as 200 rural properties in the Arizona desert. He was the only person who spoke to Inman for this story that has not seen an uptick in interest thanks to the coronavirus, though his area does often attract survivalist real estate buyers. Once those buyers find a piece of land, he said, they’re really on their own: They dig wells or haul in water; they use generators and solar panels for power; and they tend to avoid places that have homeowners associations or other restrictions on how they can use their land.

And like Rasmuson, Crites said that the most important thing for buyers who want to physically escape things like the coronavirus is seclusion.

“A survivalist,” Crites explained, “doesn’t want to be around anybody else.”