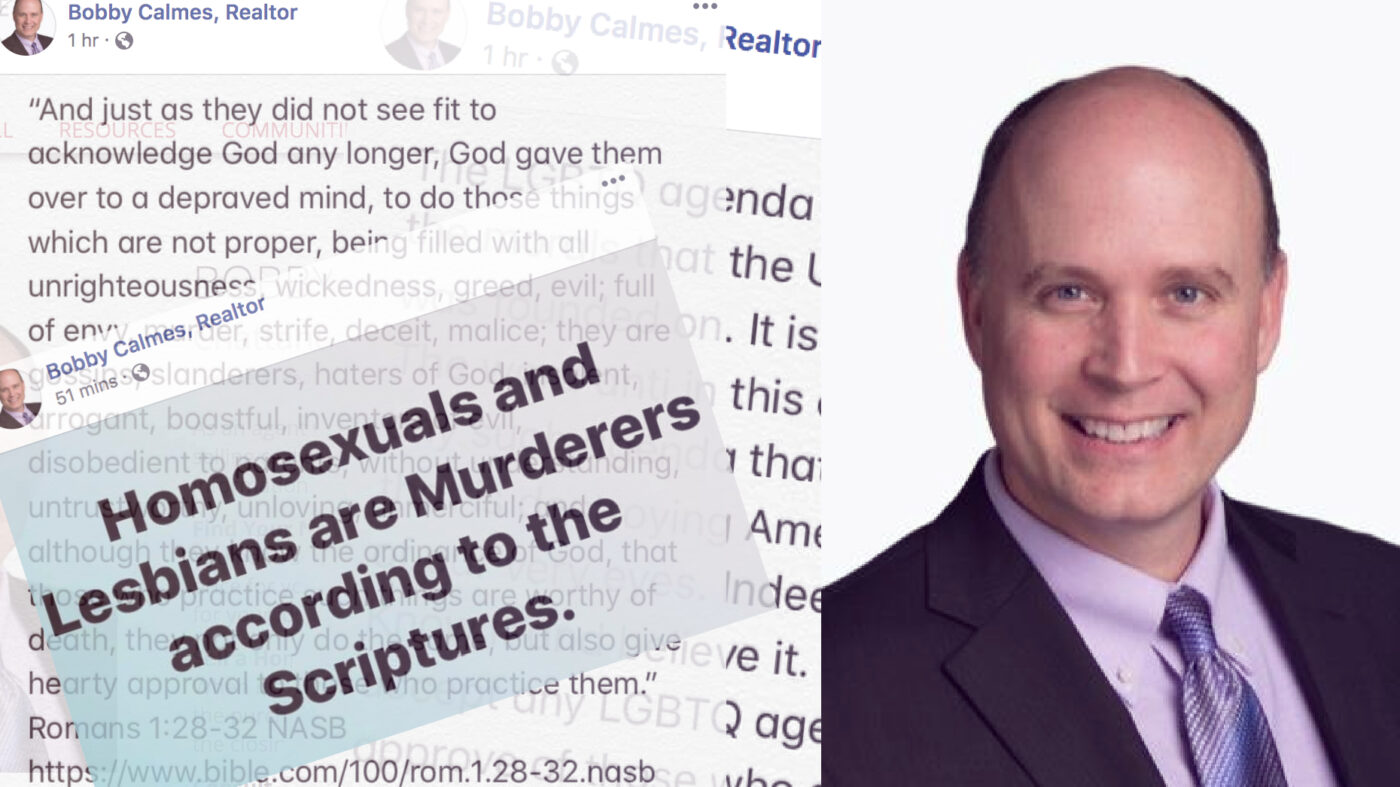 Bobby Calmes described himself as “anti LGBTQ” in one of several Facebook posts Tuesday. His company fired him within an hour.

A Georgia-based Keller Williams agent was fired Tuesday within an hour of making a series of anti-LGBT comments on Facebook, including comparing “homosexuals and lesbians” to “murderers” and saying “I am anti LGBTQ.”

Bobby Calmes — who was with Keller Williams Chattahoochee North, about 30 minutes from downtown Atlanta, Georgia — posted several different comments on Facebook Tuesday. The first stated that the “LGBTQ agenda is in total contradiction to the morals that the United States was founded on. It is the enemy of America.”

Calmes added in the comments, “Indeed, I am anti LGBTQ.”

A second post cites a passage from the book of Romans, in the Bible, that is often understood to condemn homosexuality. And a third post states that “homosexuals and lesbians are murderers according to the scriptures.”

A screenshot showing one of Calmes’ posts Tuesday. Credit: Facebook

Other posts from recent days have referenced Romans and the Bible, mentioning “the evil man” and advising people to “fear God,” though they didn’t explicitly mention the LGBT community.

All of the comments were still visible Tuesday afternoon on Calmes’ Facebook page, as well as on his Instagram profile — both of which in the past he has more typically used to post real estate listings and housing market information.

Andy Peters, the operating partner who runs Calmes’ firm, told Inman that he learned about the comments within minutes of them going live Tuesday. The comments prompted a swift conversation with other Keller Williams leaders in the region and, according to Peters, Calmes was terminated within an hour after making the posts.

Peters called the comments “disgusting” and “not reflective of our views or values.”

“We have a zero-tolerance policy for any hate speech or discrimination, period,” Peters added. “So there was no discussion really, he was immediately dropped.”

The controversy comes on the final day of June, which is also Pride Month and used to celebrate members of the LGBT community. Keller Williams in particular made a point this year of stressing LGBT inclusion when it joined other large companies in supporting a bill that would ban discrimination against LGBTQIA persons in housing nationwide.

Inman emailed and called Calmes, but he did not immediately respond to requests for comment.

Peters said that he also reached out to Calmes before firing him, but that call too was never returned.

Keller Williams Chattahoochee North posted a statement on Facebook Tuesday stating that Calmes had been terminated and that the company “is a place of inclusion and does not tolerate any sort of discriminatory behavior whatsoever.”

Pulse: The right formula for a strong team in 2020

Want more leads? Widen your reach by establishing a geo-farm
Back to top
Inmanpot