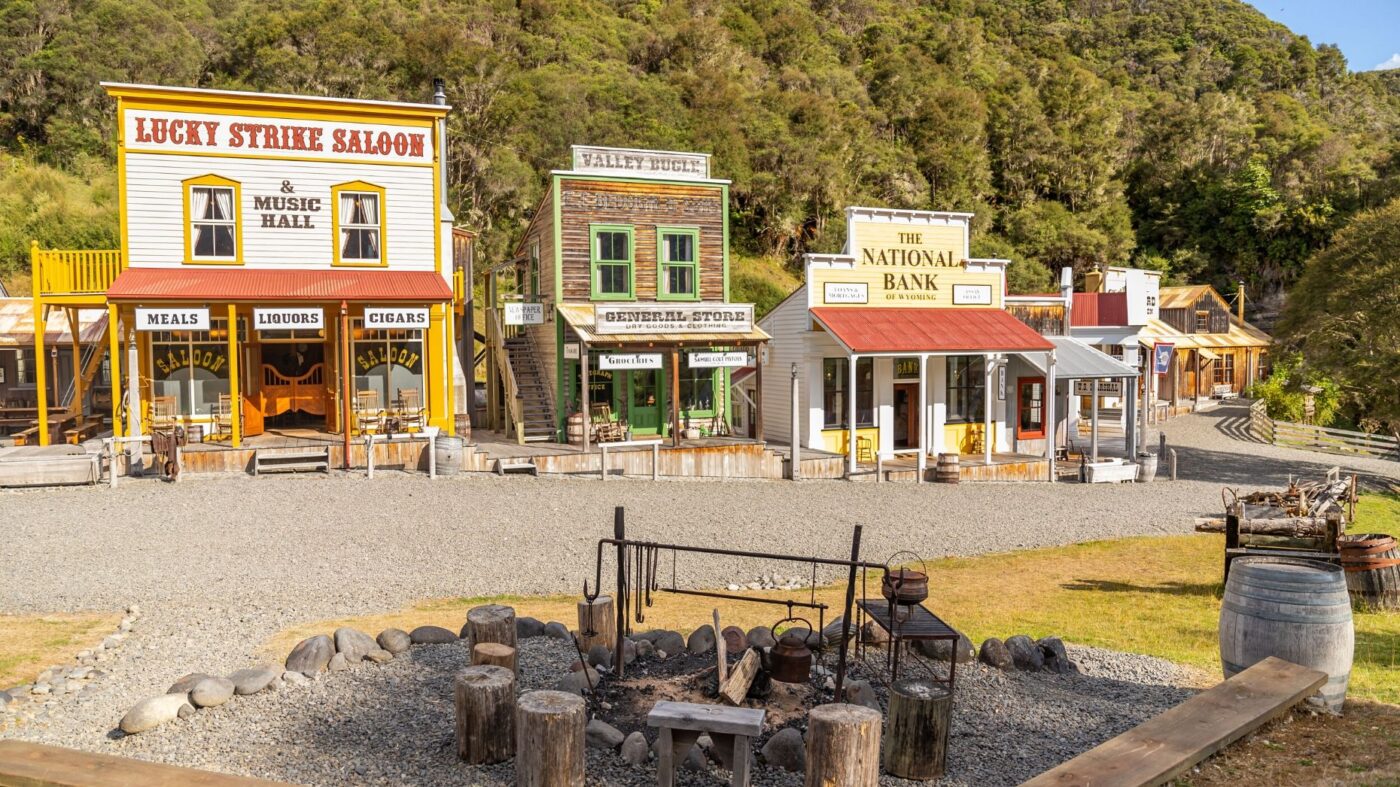 The 900-acre property in New Zealand listed at $7.5 million U.S. dollars doesn’t exactly give off that Pacific islander vibe, but it’s sure to provide a buyer with a mental escape from the stressors of today’s world.

It may be located on an island nation in the southwestern Pacific Ocean, but Mellonsfolly Ranch has a way of transporting visitors to mid-19th century Wyoming.

The 900-acre property at 440 Crotons Road in Ruiatiti, New Zealand, listed at $7.5 million U.S. dollars, doesn’t exactly give off that Pacific islander vibe, but it’s sure to provide a buyer with a mental escape from the stressors of today’s world. Constructed in 2006, the ranch was conceived of by a New Zealand businessman and Old West enthusiast who thought of the hobby as his “folly,” which is how the ranch was named.

That “folly” turned into 10 period buildings replicated from an 1860s Wyoming frontier town. The Old West town is currently being operated as a boutique hotel where the owner has hosted various events and weddings. There are enough accommodations on-site for 22 guests to stay overnight. In addition, guests can explore a licensed saloon, a courthouse that also functions as a cinema, a sheriff’s office and a billiards lounge.

The property's creator was an Old West enthusiast.

The replica of an 1860s-era Wyoming town is currently operating as a boutique hotel.

The "town" includes 10 period buildings based on mid-19th century designs.

The courthouse also doubles as a cinema.

The current owner has primarily used the property for small gatherings of family and friends, a few weddings and some corporate events.

The property was constructed in 2006.

The hotel can accommodate 22 overnight guests.

The ranch is also home to a Manuka honey business.

In addition to the Old West town, the property holds a main private residence and two rental homes.

In total, the property consists of about 900 acres.

“The quality and the standard that [the Western town is] built to is just something we rarely even see in the finest of homes,” listing agent Ben Hawan of New Zealand Sotheby’s International Realty Wellington told Inman. “And especially for New Zealand, as well as that property, like a lot of houses in New Zealand, they’re still single-glazed glass. That property, all the Western town, is made to look fully double-glazed.”

“I found it overwhelming when I first went there,” Hawan added. “It was just like … dreams come true.”

In addition to the Western town, the property holds a main private residence and two rental homes that may function as staff accommodation.

Notably, the ranch is also home to a commercial Manuka honey business, one of New Zealand’s most profitable exports, which is said to have antibacterial properties. Over the past three to four years, the current owner, Rob Bartley, told Bloomberg that the ranch’s honey business has become “like gold.” The current managers of the honey business, who live on-site, are open to staying on for a few years to transition the business. Likewise, the previous managers have also expressed an interest in coming back to the business if needed by the new owner.

Because the estate is worth more than $10 million New Zealand dollars, the buyer has the potential to qualify for New Zealand’s Investor 1 Resident Visa, a visa available to individuals who invest $10 million in the country over a three-year period. The visa allows an indefinite length of stay in the country for the individual investor, as well as their partner and dependents who are 24-years-old or younger.

Therefore, with a good chance at residency likely included in the sale — not to mention the country’s recent good press in containing the coronavirus pandemic — the property has seen significant interest from foreign buyers, a New Zealand Sotheby’s International Realty Wellington rep told Inman.

“Given that New Zealand has been in the limelight lately due to its success in battling COVID-19, we have received far more interest than usual from international buyers over the last few months,” Tiana Jones, marketing and communications rep for New Zealand Sotheby’s International Realty Wellington, told Inman in an email. “But even prior to this, New Zealand has long been a desirable place to live due to the enviable quality of life here. New Zealand, down here in the Pacific, enjoys a certain level of insulation from the comings and goings of the world at large.”

Hawan said, at this point, he’s seen about 45 percent of interested buyers come from overseas, roughly 30 percent from New Zealand residents, and the remaining from New Zealand citizens abroad, Australians or Singaporeans, all of which have the right to purchase property in New Zealand. However, it’s uncertain still how many of those potential buyers will move beyond the initial stage of inquiry.

“I think we may see a decent portion of the inquiries not progress simply because a lot of those inquiries are made before kind of getting up to speed with the requirements and restrictions,” Hawan told Inman.

Similarly, Hawan said, “It’s early days yet,” in terms of determining whether or not the property is drawing a certain type of investor.

“We’ve had a mix of people who have just fallen in love with the idea of the property, and then we’ve got the people who see the value in the businesses … and probably a number of investors who may have other plans, but nothing trending just yet,” Hawan said.

Back to the future: Check out this totally tubular 1980s mansion

A $100M condo? In Los Angeles? Amid a pandemic?
Back to top
Inmanpot