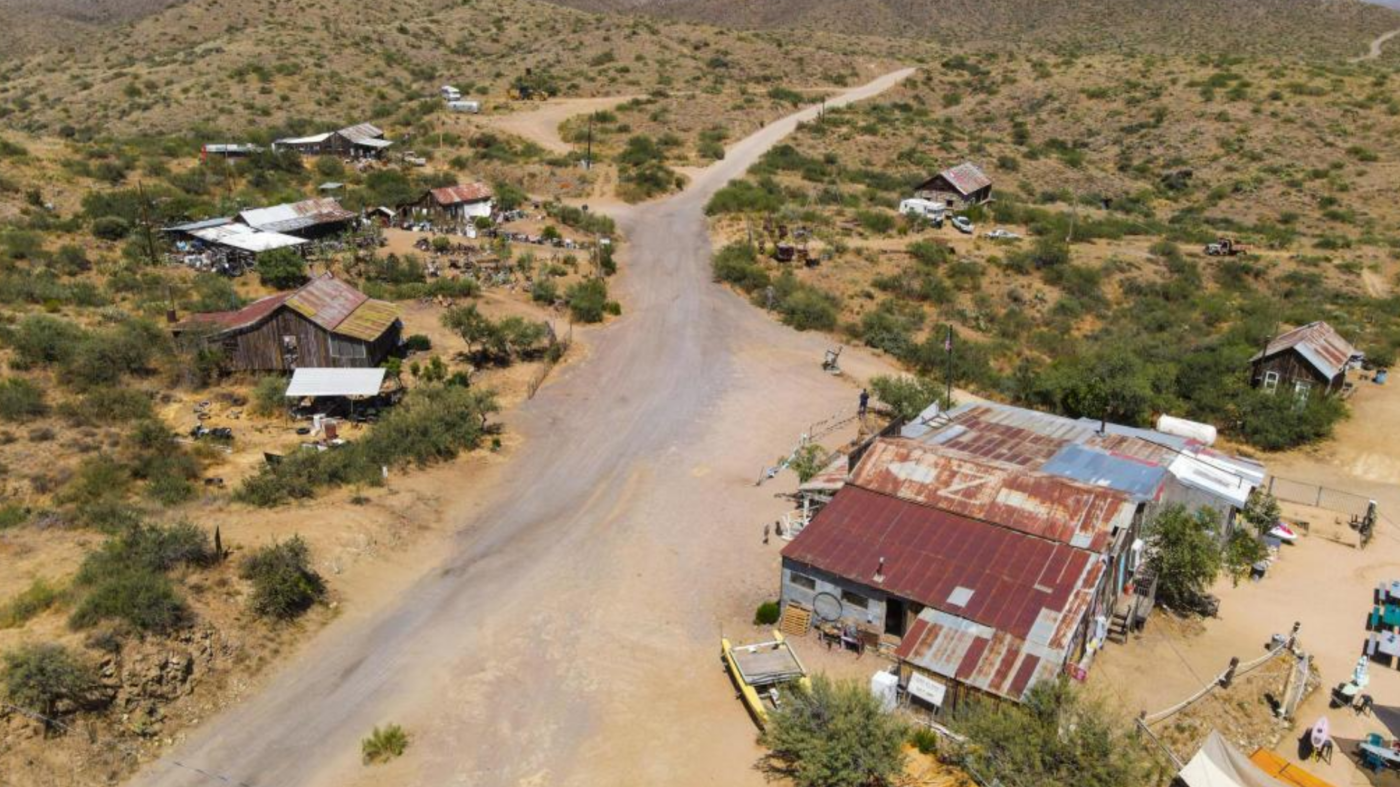 Real estate agent Justin Godsey is selling an Arizona ghost town complete with a dive bar, mercantile and a handful of homes for $1.25 million.

As the pandemic lingers into the summer months, many of us have daydreamed about a space where we could get away from the worries of modern life and spend our days sipping on our favorite drinks. While that’s not an option for most, one lucky buyer with a couple million to spare and a penchant for desert air can make those daydreams come true.

For $1.25 million, a buyer can own Cleator, Arizona, a 156-year-old former gold mining town with a popular dive bar and mercantile. The 40-acre town is nestled in the hillsides of Prescott National Forest and is home to a handful of friendly renters who prefer remote living.

In addition to owning the land and properties, the buyer will also get mining rights and the ability to rename the town, which has gone through two name changes since 1864.

“The population is low, but it’s a friendly bunch,” North and Co. Real Estate by Trade agent Justin Godsey told realtor.com, which first reported on the unique listing. “The population dwindled, and that’s when it became — for lack of a better word — a ghost town.”

In an interview with Inman, Godsey said the Cleator family contacted him after discovering his previous videography and marketing work for previous listings. Although he’d never sold a town before, Godsey said he couldn’t pass up the opportunity to sell such a unique property.

“Selling a town is a lot different than selling a house,” Godsey said while laughing. “It’s a matter of looking at what draws people there currently, but also what you could do with the property or what’s made [the town] thrive as long as it has.”

Godsey’s team got to work and created a two-minute video highlighting Cleator’s warm and rugged spirit and famous dive bar, The Cleator Yacht Club. Since going live on July 13, the video has garnered more than 100,000 views on Facebook and stories on national and local Arizona news sites.

“The video that I put out there originally that got all of this stuff started has 100,000 views on it, and 75 percent of the comments are, ‘Oh, I’ve been to that bar before and I love it.’ Or, ‘The bar is worth the price of the town itself,'” Godsey said.  “So, I’ve been really amping [the bar] up.”

In addition to highlighting the town’s quirky charm, Godsey said it’s been important to spark the imaginations of potential buyers by pitching what Cleator could become.

“With that in mind, there are a few different types of perfect buyers. It depends on the scope of the project the person who ultimately buys it is looking to take on,” he added. “If someone just wants to be able to own a town, and say they own a piece of Arizona history, then great. They can keep it the same.”

He continued, “If someone has visions for a bigger, kind of unconventional project that you just don’t get to plop in the middle of the valley anywhere or in any city, this is the perfect spot to do whatever you want to do.”

If a buyer wants to keep the town as-is, Godsey said they must be prepared to become a landlord since the residents are on month-to-month leases. The bar operators also lease The Cleator Yacht Club, but Godsey said “the details of the contract are more complicated.”

If a buyer wants to transform Cleator into a resort or outdoor recreation spot, Godsey said they’ll have to invest in expanding the town’s utility services, which include water, electricity, internet and cable access.

“The opportunity of owning a town is so rare,” he said of the challenge buyers are willing to take.

Godsey said he’s received a flood of interest with 10 to 15 serious buyers — a list that seems to be growing by the day.

“I’m probably getting 10 to 12 calls right now, some of them are tire-kickers, but I’m picking out the serious ones from there,” Godsey said of the calls he received while talking to Inman. “I’ve got a running list of 10 to 15 serious interest parties, and then I’ve got a couple of handfuls who are like, ‘I need to know everything. Keep me updated and we’re going to get out there and look at it.’”

“I’m showing it to three parties today and I think we’re going to get it done pretty quickly,” he added. “It’s been pretty crazy.”

Although most agents won’t have the experience of selling a town, Godsey gave one piece of advice just in case: “Be resourceful.”

“Be open to asking lots and lots of questions and just be ok with not knowing the answers to questions right away,” he said. “Every day I’m on the phone with different people and I’m fielding questions that I would never get in any other transaction.”

“I’m on the phone with the Bureau of Land Management, which is something I’ve never had to do before,” he added. “I’m calling counties and talking to city planners, so making sure you have as many resources as possible is important.”

Are McMansions back? Pandemic spurs renewed interest in big homes

Search With Style helps agents market architectural styles
Back to top
Connect Now starts tomorrow! Get all 3 events for just $99.Get the deal!×
Inmanpot