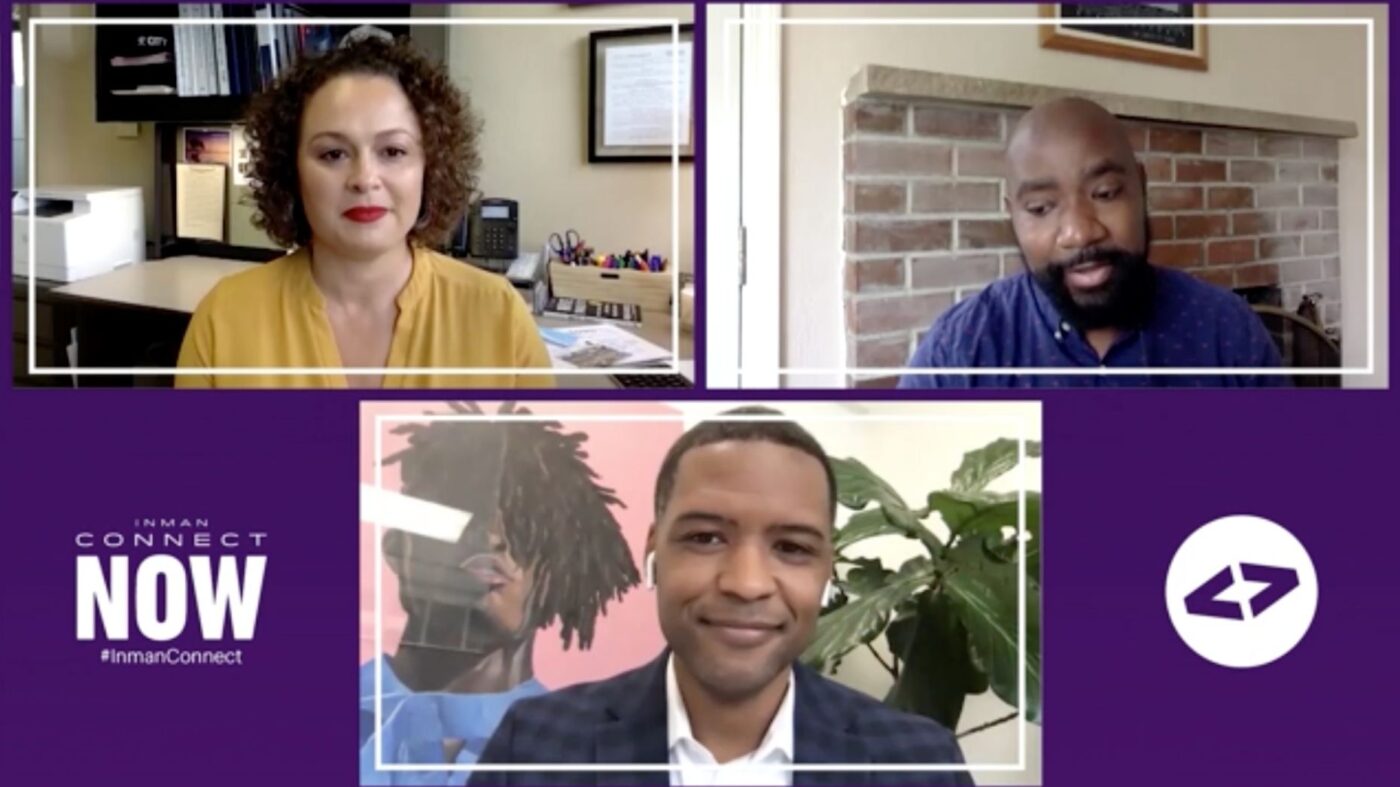 Nate Bowling moderated a Connect Now panel exploring how diversity and community outreach can be better addressed in the real estate industry.

“These are extraordinary times,” Nate Bowling, a Tacoma, Washington-based teacher, writer and podcaster said at a panel called “Building a Community and Taking a Stand” at Inman Connect Now on Tuesday.

Bowling, a seasoned Inman Connect speaker, moderated the panel exploring how diversity and community outreach can be better addressed in the real estate industry. Dave Jones, owner/manager of Windermere Abode in Tacoma, and Jasmyn Jefferson, principle managing broker of Windermere Professional Partners-Tacoma, both spoke during the panel about real estate agents’ responsibility to make the profession more inclusive and activist-based.

“I want to just own something that’s very apparent to anyone watching,” Bowling noted. “That we are three Black Americans who are working in predominantly white career fields.”

Bowling went on to ask Jefferson and Jones what they thought were some of the implications of the lack of diversity in the real estate industry.

Jones pointed out that 80 percent of National Association of Realtors (NAR) members are white, according to the NAR’s 2020 member profile. Hispanics/Latinos make up 10 percent, Blacks make up 6 percent and Asian/Pacific Islanders make up 5 percent of members.

“It starts from within,” he added. “You have to educate yourself on why this is happening.”

Jefferson noted that the pattern of white real estate professionals primarily working with other white people, both in terms of growing the profession and in terms of working with clients, creates an exclusionary culture where specific demographics then face great challenges in becoming educated about real estate.

“Within Tacoma public schools, you don’t see the option of real estate as a career, and this is one of the career opportunities where there’s no limits to the amount of money you can make,” Jefferson said. “When it comes to wealth equity, we’re not offering classes about that and generational wealth building. We don’t use that as a community outreach as an industry. It’s primarily Black Realtors who are going out and doing that, it’s not a broad-reaching topic.”

In regards to the recent resurgence in the Black Lives Matter movement, Jefferson and Jones noted that now is the time for non-Black real estate agents to educate themselves and become inspired to take action.

“Unfortunately, my expectation is low,” Jefferson said. “I would like to see more, and this time around, I am seeing a little bit more and that’s given me a little more pause. But it’s par for the course.”

“I think right now it provides an opportunity to shed light,” Jones added. “But also, it’s not our work to do this. That’s like asking a wife that’s being beaten to change her husband. No, you can speak out and say ‘I’m impacted by this man that’s beating me, but that man has to change.'”

As for those who are skeptical about using their platform as a Realtor to become an active advocate for diversity (rather than just staying in the industry to make money), Jefferson and Jones said the time will come for those individuals when they’ll need to decide what kind of person they want to be in the profession.

“Do you, but just know that the world is changing,” Jones said. “You’ve got to reflect on yourself. If nothing else, do yourself the favor of reflecting on where you stand on all this and actually do some intake instead of standing your ground in white supremacy and your white privilege, or perceived power that you have.”

“It’s a side,” Jefferson said. “You’re either going to do something within yourself where you’re going to get involved in the community. Or you’re just going to not do anything and you’re going to just make money, and if that’s what you want to do, do that. My biggest request is don’t fake the funk.”

However, Bowling also issued a word of caution to complacent real estate professionals about the demands of the future homebuyers who are currently his own students in the classroom.

“The generation of people who are coming up and are going to be the future consumers of real estate and looking for brokers and agents, they’re going to want justice,” Bowling said. “It is not transactional to them — it is community to them. And so, if you’re trying to sell a house to a Zoomer, and you’re silent on matters of justice, that Zoomer is going to find somebody who’s not.”

The conversation ended with Jones and Jefferson agreeing that in order for real change to take place in the real estate industry, leaders in the profession need to take the helm through education and increased accessibility.

“Management, owners: You are the leader of all the confused people,” Jefferson said. “They’re looking at you. In addition to increasing the diversity, what are you doing to enrich your knowledge base on these topics?”

“Individual owners: Start with yourself first,” Jones said. “The minute you start doing this work, you’re going to face extreme backlash. Then educate your family, and then your community, and then your industry.”

6 tips for standing out as a luxury real estate agent