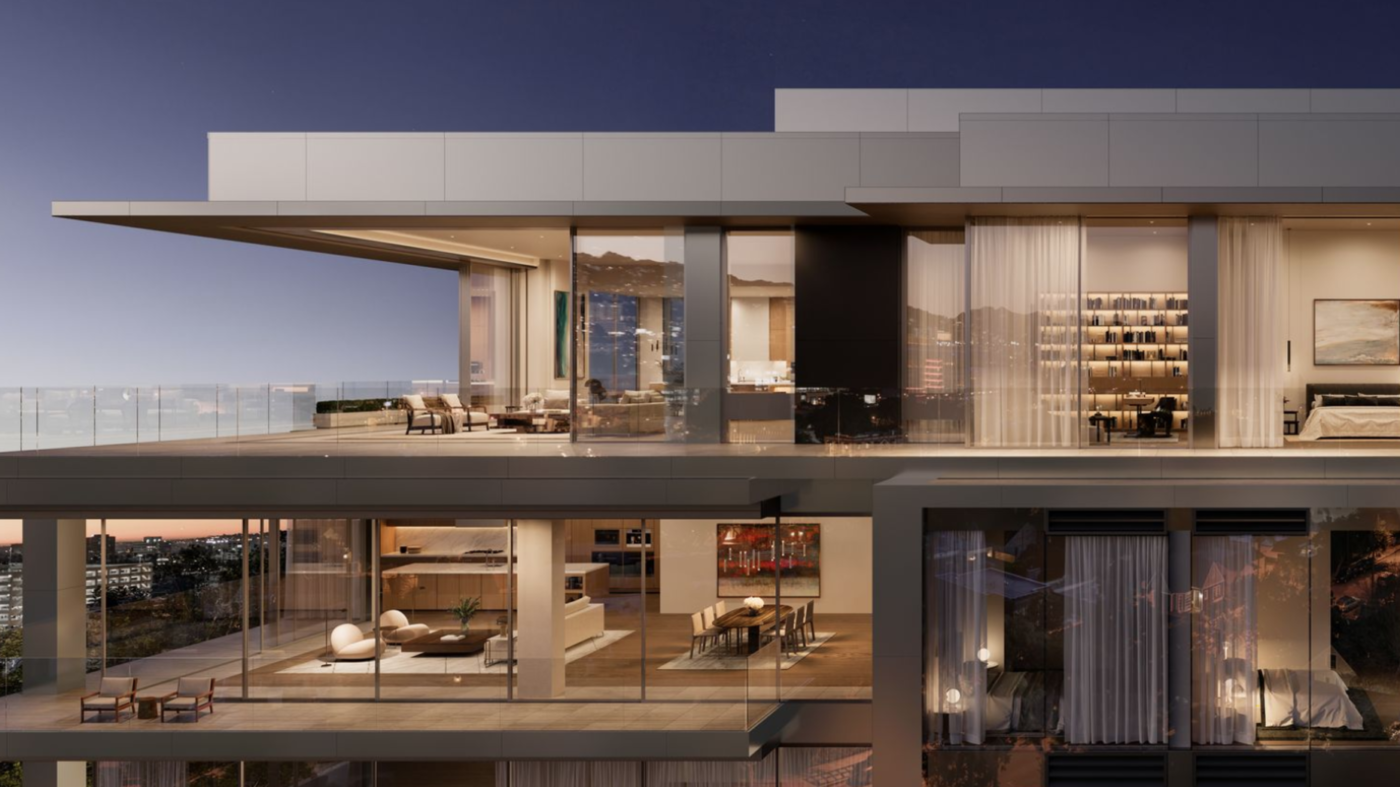 If sold, the 20,000-square-foot penthouse atop The Residences Tower in West Hollywood would triple the largest condo deal ever transacted in Los Angeles County, when author Candy Spelling purchased a $35 million condo in 2010.

Another $100 million property is about to hit the market in Los Angeles — but this time, it isn’t a sprawling estate or even a house. It’s a condo.

The property, a 20,000-square-foot penthouse atop The Residences Tower at 8899 Beverly Boulevard in West Hollywood, is under construction and slated to be finished early next year. As first reported by the Wall Street Journal, developer Tyler Siegel of Townscape Partners said he and partner John Irwin plan to put it on the market for upwards of nine figures.

The property is certainly nice — wraparound glass windows on the top floor of a 10-story unit and 4,000 square feet of outside terrace space along with sweeping views of Malibu and the rest of Los Angeles. But such a listing price is an ambitious ask, especially amid a coronavirus pandemic in which many homebuyers have chosen to flee cities and residential buildings in favor of suburbs and single-family homes.

If sold, it would triple the largest condo deal ever transacted in Los Angeles County, when author Candy Spelling bought a $35 million condominium in 2010. The biggest sale in the county to date is a nine-acre estate that Jeff Bezos bought for $165 million in February.

Fredrik Eklund of Douglas Elliman is the listing agent. Tom Kundig of the Olson Kundig architectural firm designed it. Eklund did not immediately respond to a request for comment.

While such high-stakes deals do occur, a strategy of putting an exorbitant asking price on a property is also a common tactic among LA developers looking to draw attention. Compared to last year, Los Angeles condo sales have dropped by more than 30 percent in second quarter amid the coronavirus pandemic as luxury homebuyers increasingly look for single-family homes with more space.

All of that, however, does not faze Siegel and Irwin who believe the right buyer will still turn up. They told the Journal that the condo’s luxe status and prime location in central LA will make it a hot commodity for a buyer.

Hot markets, new opportunities: What agents across the country have to say about the industry

Berkshire Hathaway HomeServices sets up shop in Mexico for first time
Back to top
New sessions have been added to Connect Now Agenda on October 20th! Check out the power-packed lineup. SEE THE AGENDA×
Inmanpot