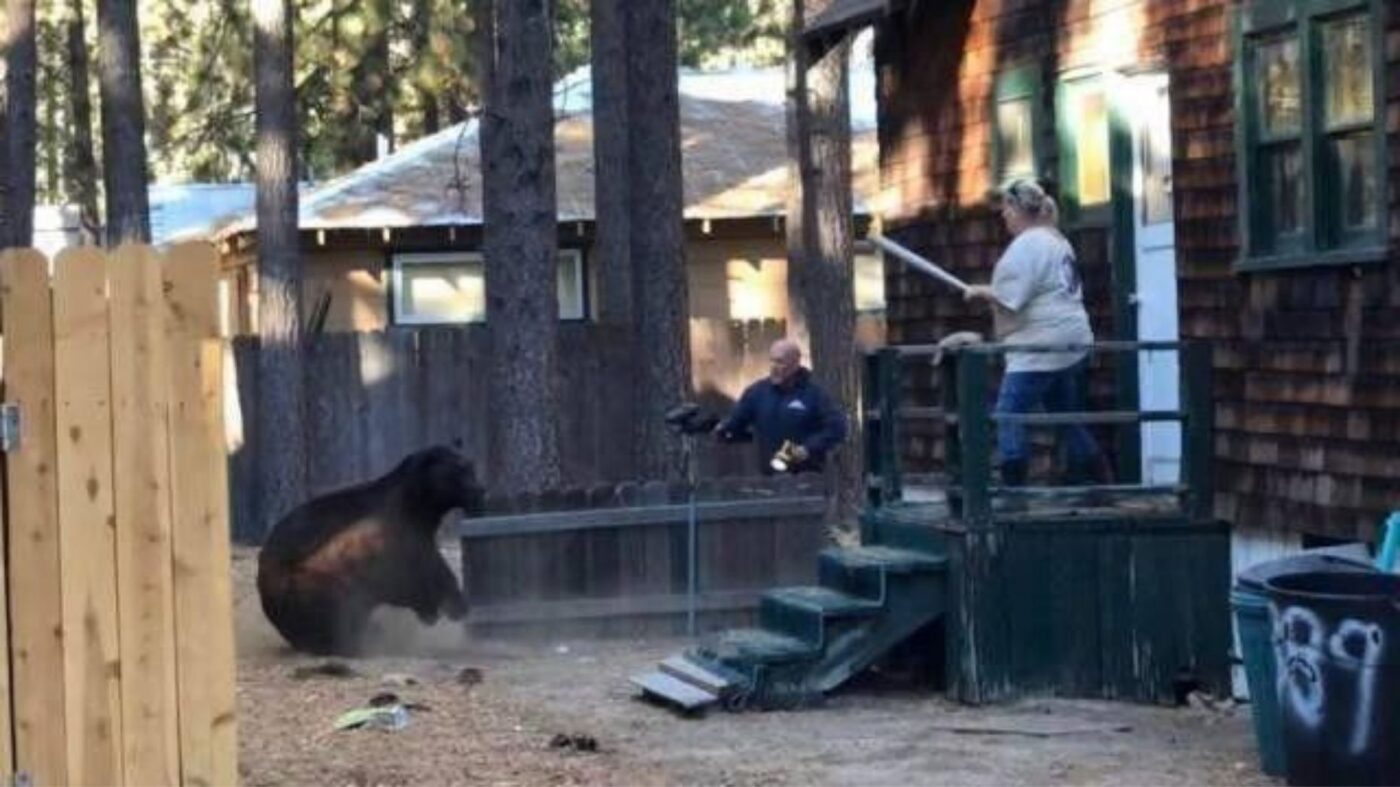 A fixer-upper cabin in South Lake Tahoe is on the market for $199,000 — and, no, the bear featured in the listing’s photos doesn’t come with the sale.

The 800-square-foot cabin built in 1916 at 889 Alameda Ave. is drawing attention after eagle-eyed readers pointed out a listing photo of a man and woman in an apparent standoff with a 500-pound bear that appears to be approaching the property tucked alongside a standard mix of  bedroom, bathroom and kitchen images.

“Did a bear live there?” joked one viewer of the listing on Patch, a local news and information platform that operates in cities across the U.S.

Turns out, the bear was featured in the listing in an effort at full-disclosure, according to Warren Land Co., the real estate agency handling the sale.

“After somebody buys the cabin, neighbors are certainly going to tell them about the bear incident,” George Warren, the property’s broker, told Patch. “A buyer might wonder why the listing broker didn’t mention this.”

The exterior of the South Lake Tahoe cabin for sale at 889 Alameda Ave.

The home is a definite fixer-upper

According to the listing "the kitchen and bathroom are a mess"

The home is in disrepair, but maintains some charm

The property is just three blocks from Lake Tahoe

The cabin had been in Warren’s wife’s family for decades, and in 2019 was occupied by “Uncle Kunio,” a member of the family who had started suffering from dementia and other health issues. Unbeknownst to Uncle Kunio, a 500-pound bear had been living under his home for some time, and was discovered quite by chance.

In October of that year, a neighbor walking their dog by the cabin heard a hissing noise and smelled gas, which prompted a call to the authorities. When the South Lake Tahoe Fire Rescue responded to the scene they encountered the bear, which likely ruptured the gas line while making itself comfortable under the home.

“The result could have been catastrophic,” Warren said.

The gas line was repaired once the bear was shooed away, and the bear was ultimately relocated by Lake Tahoe Wildlife care.

Beside the bear problem, the home needs some work, as photos of the interior’s peeling paint and chipped floor tiles show. However, despite candid depiction of the home’s current state of disrepair — the listing calls it “a MAJOR fixer” and says “the kitchen and bathroom are a mess” — the two-bedroom, one-bathroom home has garnered a great deal of attention, Warren said. The broker has been flooded by inquiries, likely because of the cabin’s attractive price and its location just three blocks from Lake Tahoe.

The owners are accepting all-cash offers on the house until Monday at noon.