Looking for a little clarity on this week’s news? Windermere Chief Economist Matthew Gardner takes another look at mortgage forbearance, explaining the latest data and insights in light of some recent headlines.

Today, I’m not going to discuss last week’s economic announcements — mainly because there really weren’t any that were of great interest. Instead, I’m going to cover a topic that was bought to my attention by two of my viewers, Lisa Peterson and Steve Jones.

They reached out to me separately and asked if I would give an update on mortgage forbearance in light of some recent headlines that are, shall we say, pretty frightening. Well, I think that it’s absolutely worth revisiting, so thank you, Lisa and Steve. Forbearance is this week’s topic!

What is the media saying?

So, I mentioned that recent headlines were somewhat scary. Here are just a few examples. Now, this first one actually made me chuckle.

On the left it says, “FHA Mortgage delinquencies hit a record high with economy rattled.” Oh no! But hold on just a second — what’s that to the right? “Low rates push home builder’s optimism to highest since 1998.” OK, even I’m confused. Which is it? 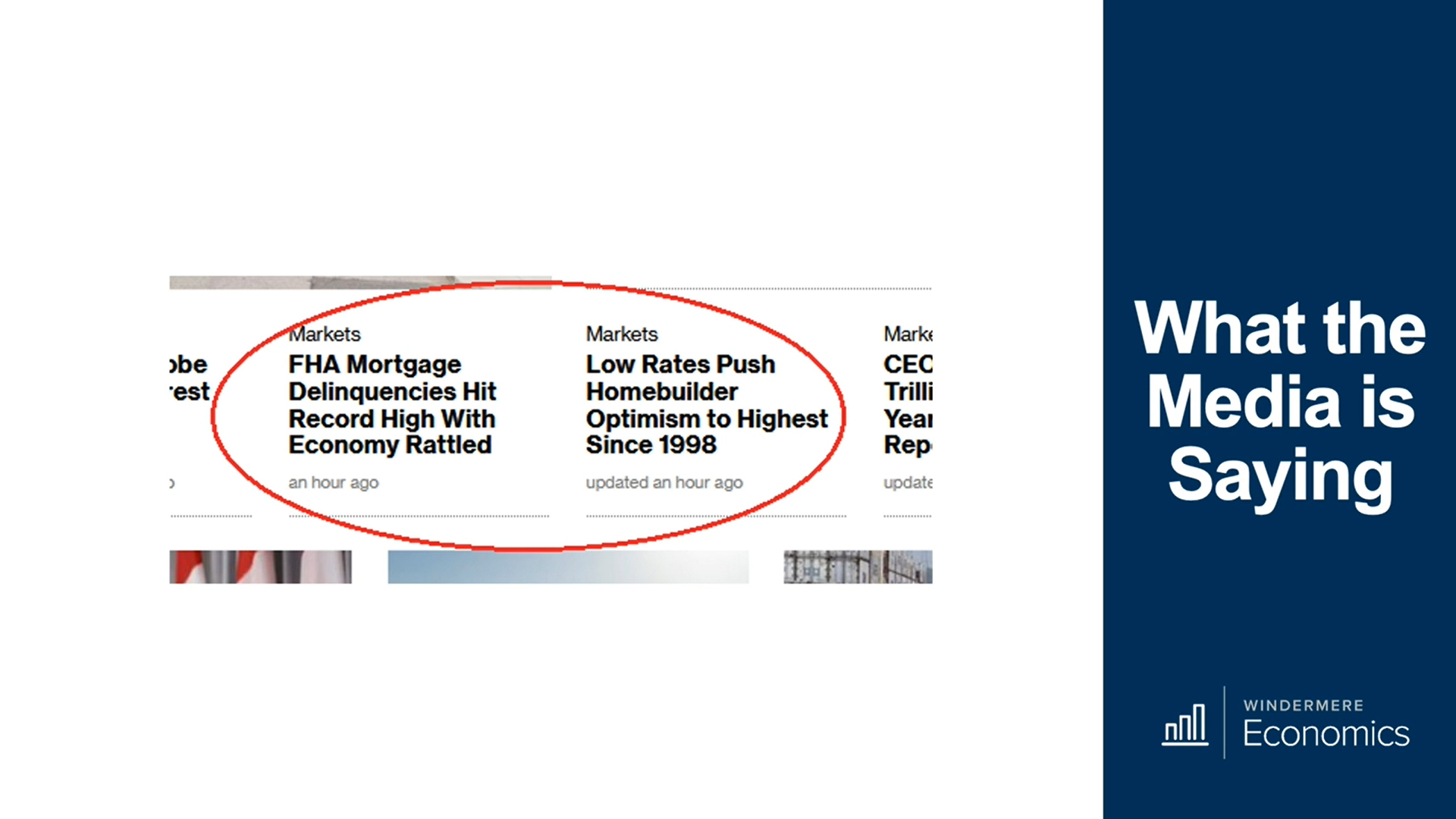 Here’s another example — my friend Diana Olick from CNBC waxing poetic about the horror of there being 3.9 million homeowners in COVID-19 mortgage bailout. This one actually really does tick me off, because there is no “bailout.” 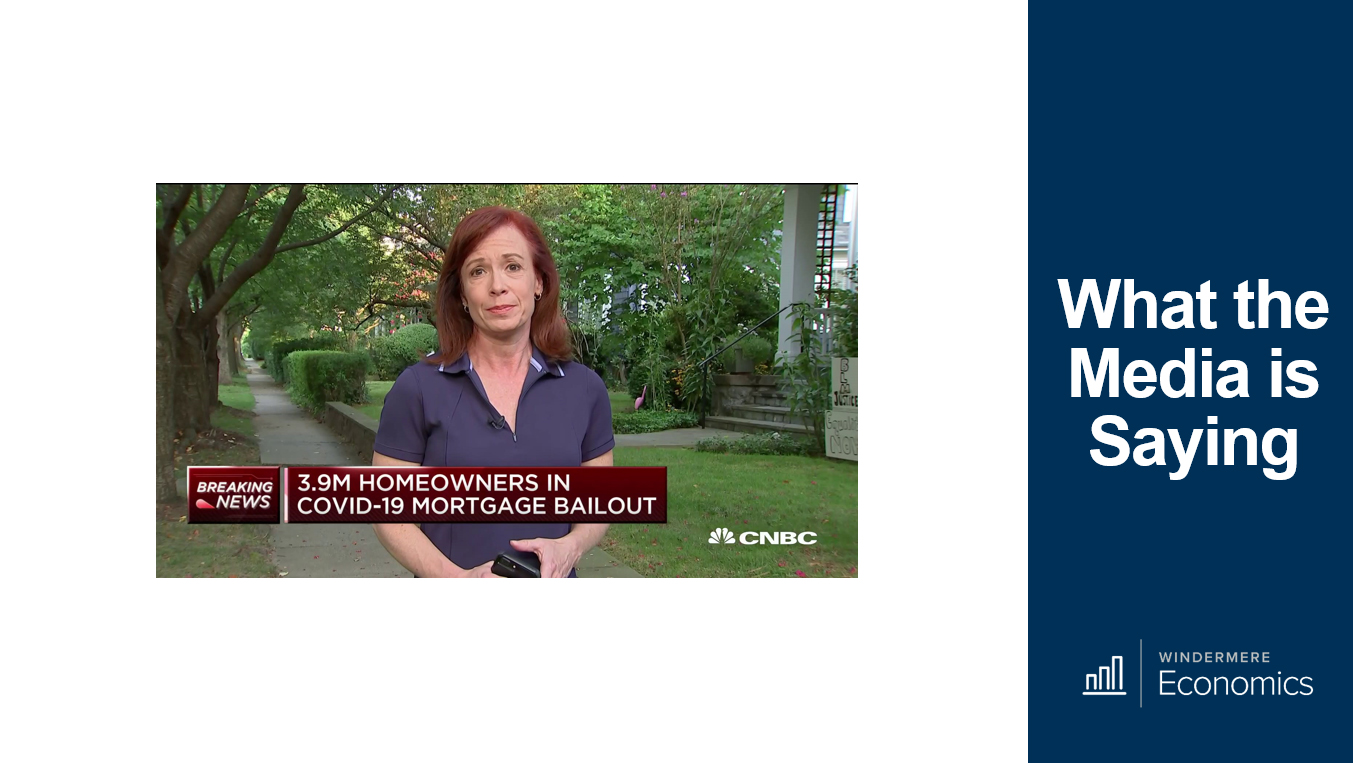 I actually grabbed my copy of Webster’s and looked up the word “bailout.” A bailout is, and I quote, “an act of giving financial assistance to a failing business or economy to save it from collapse.” Of course, there will be some people who will think that homeowners are getting something for nothing, but that’s not the case.

The Federal Housing Finance Agency (FHFA) started the forbearance program back in March to assist homeowners who were put into financial distress — through no fault of their own, I would add — and allow them to defer mortgage payments because of COVID-19.

Now, let’s get one thing straight: They aren’t getting something for nothing. The payments they miss must be made up when they come out of the program. They can do this through refinancing, increasing their monthly payments or selling the home to satisfy the debt.

But the way she says it actually sounds as if homeowners are having their mortgages paid for them, which is absolutely incorrect.

And finally, this is a headline from the Washington Post: “Serious mortgage delinquencies soared to a 10-year high last month.” This one is interesting because the article actually starts out by saying that overall delinquency numbers are improving — but the delinquency rate for homeowners who are seriously behind in their payments is soaring.

And the problem here is that the delinquency numbers include owners who are in the forbearance plan, so it really should not be surprising to see these numbers rise as owners are allowed to defer their mortgage payments. It’s not as if they’re simply choosing not to pay. And this chart shows what has got reporters in a tizzy. 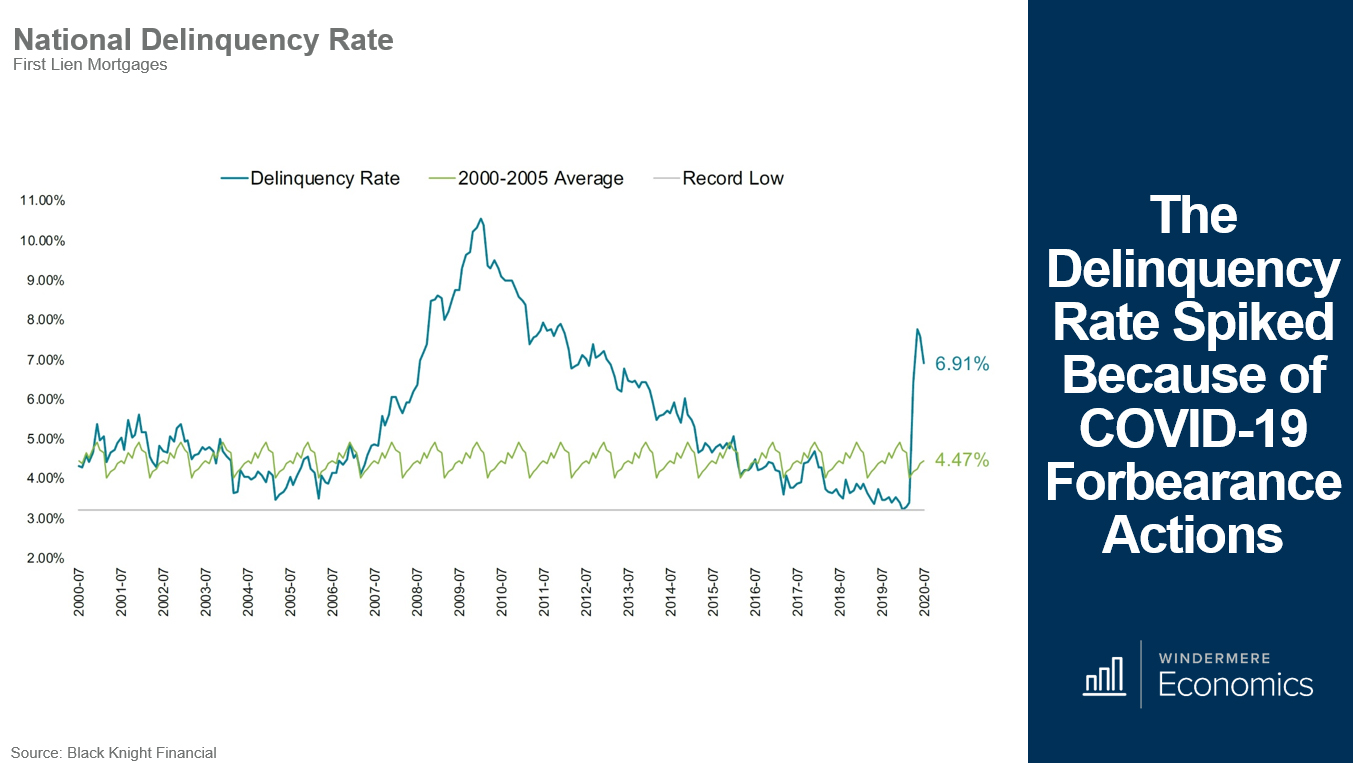 Yes, the delinquency rate is elevated, but it actually fell by nearly 9 percent in July, which therefore lowered the national rate to 6.9 percent. That said, it’s true that there are still 2 million more borrowers delinquent now than there were back in February when COVID-19 really hit the economy. 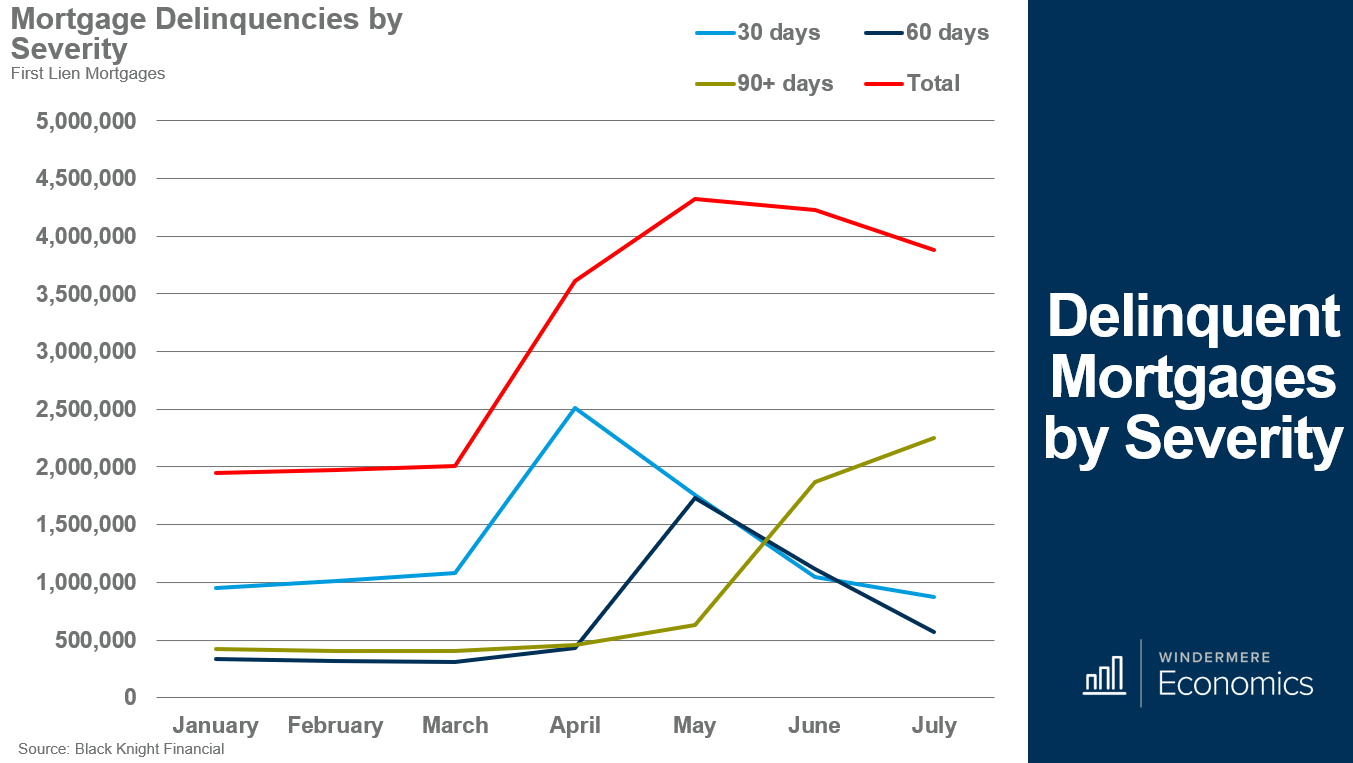 When we look at how late borrowers are in making their mortgage payments, the light blue line shows 30-day delinquencies. At 875,000, the total is actually 14 percent below pre-pandemic levels, which tells me that the initial wave of COVID-19-related delinquencies has certainly subsided.

But again, to put this in perspective, the share of owners who are delinquent on their mortgages is exactly the same as it was after Hurricane Irma hit back in 2017 and, if memory serves me correctly, we made it through that period without the housing market collapsing.

Where are we when it comes to homes in forbearance?

Well, this is the very latest data from Black Knight Financial, and it shows the forbearance situation as of Sept. 8. In total, there are 3.7 million mortgages in forbearance out of 53 million homes with a mortgage, therefore accounting for 7 percent of all mortgaged homes. 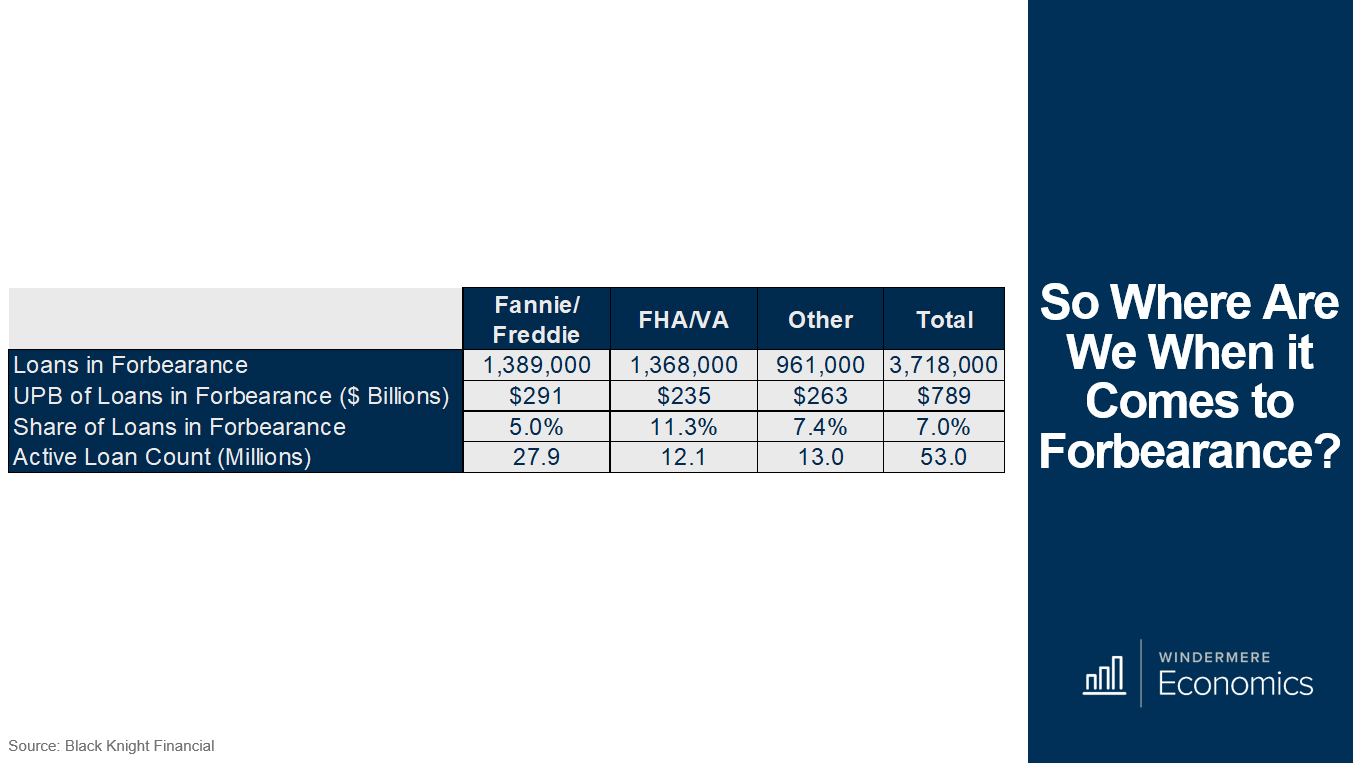 And as you can see, forbearance is being quite heavily used by homeowners with either FHA or VA loans, which makes sense as these loan products accept lower-credit-quality borrowers who are possibly being more impacted by COVID-19-related job losses than others.

But what these numbers don’t show — and what is not actively reported by the media — is that forbearances are now down by about 1 million (or 21 percent) from the peak seen back in May.

As you can see below, the number of homes in the program has been shrinking since early July. After dropping by nearly 150,000 the week before last, the total number of mortgages in forbearance dropped by another 66,000 (or 2 percent of the total) last week. 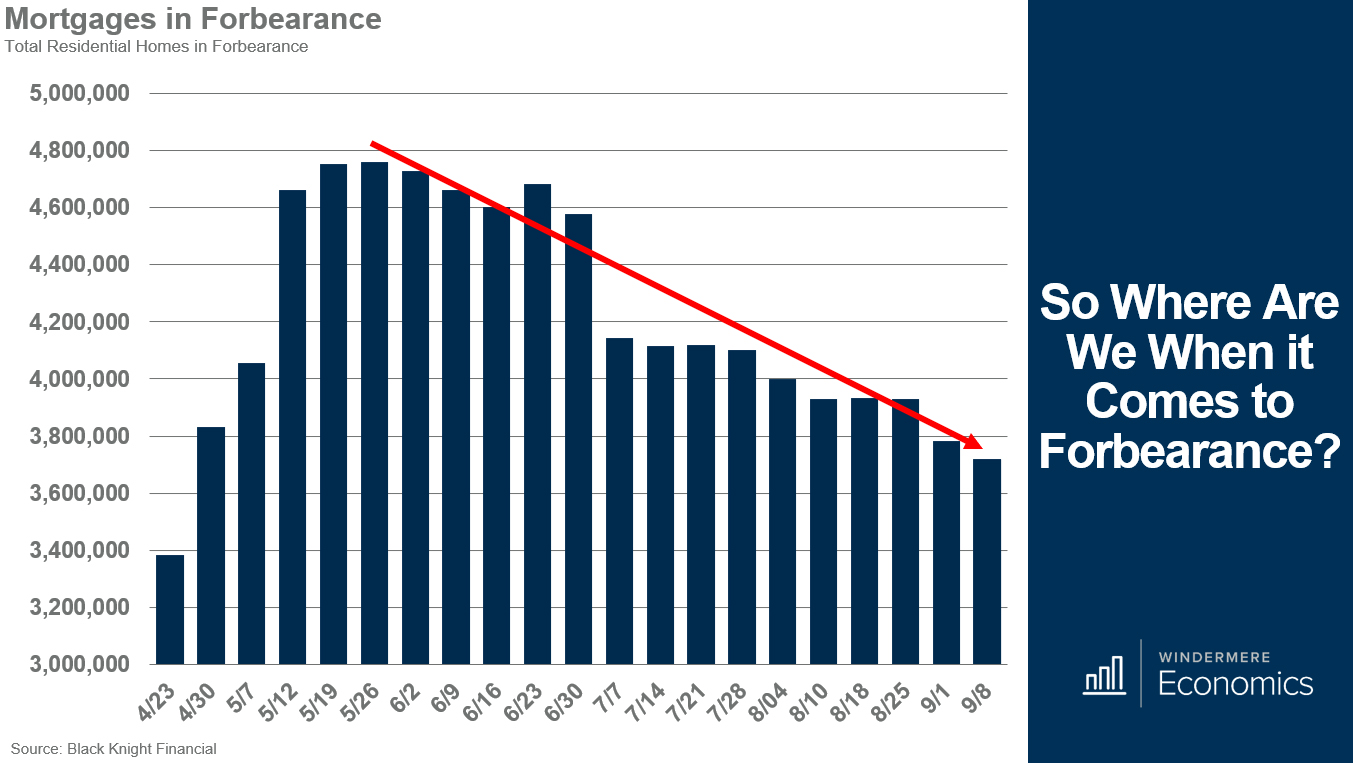 All in all, active forbearances are now down by 238,000 over the past 30 days, as mortgage servicers continue to work their way through the wave of forbearance plans that are set to expire this month.

The chart below shows the number of mortgages in forbearance and when the plans are set to expire. The numbers are certainly significant this month, and this is something else that has the media stirred up. However, it’s my belief that we will see around half of plans extended and half coming off the program. 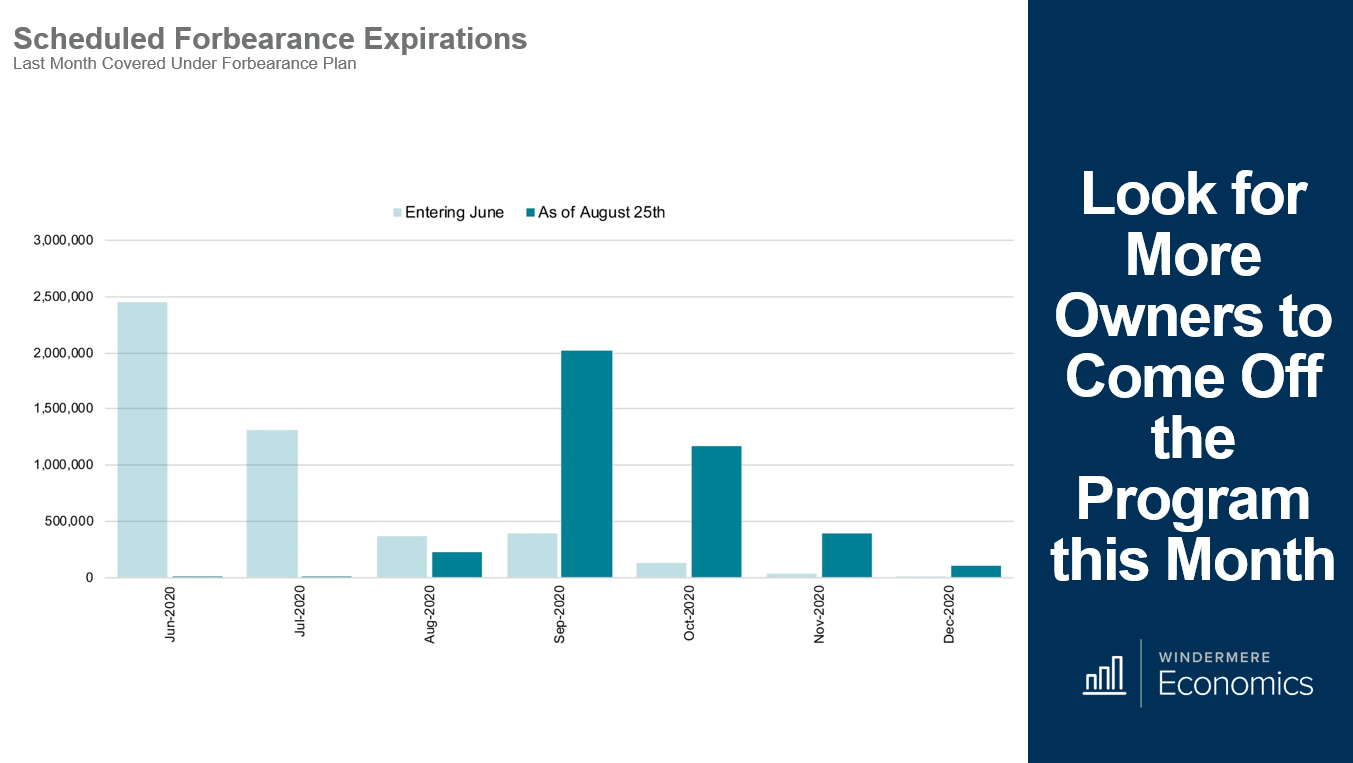 And the reason I expect the numbers to be split is that, if I look at activity over the last thirty days, there has been a roughly 50-50 split between removals and extensions, with about 500,000 loans falling into each category. I expect to see the same when this group of forbearances expires.

What is the makeup of forbearance?

This last chart shows that, out of the roughly 6 million homeowners who entered forbearance over the past six months, around 2 million (or 34 percent) have left the program.

On the right of the pie, you’ll will see that a full 26 percent of borrowers who were once in forbearance (around 1.5 million homeowners) are current on their mortgage payments again. 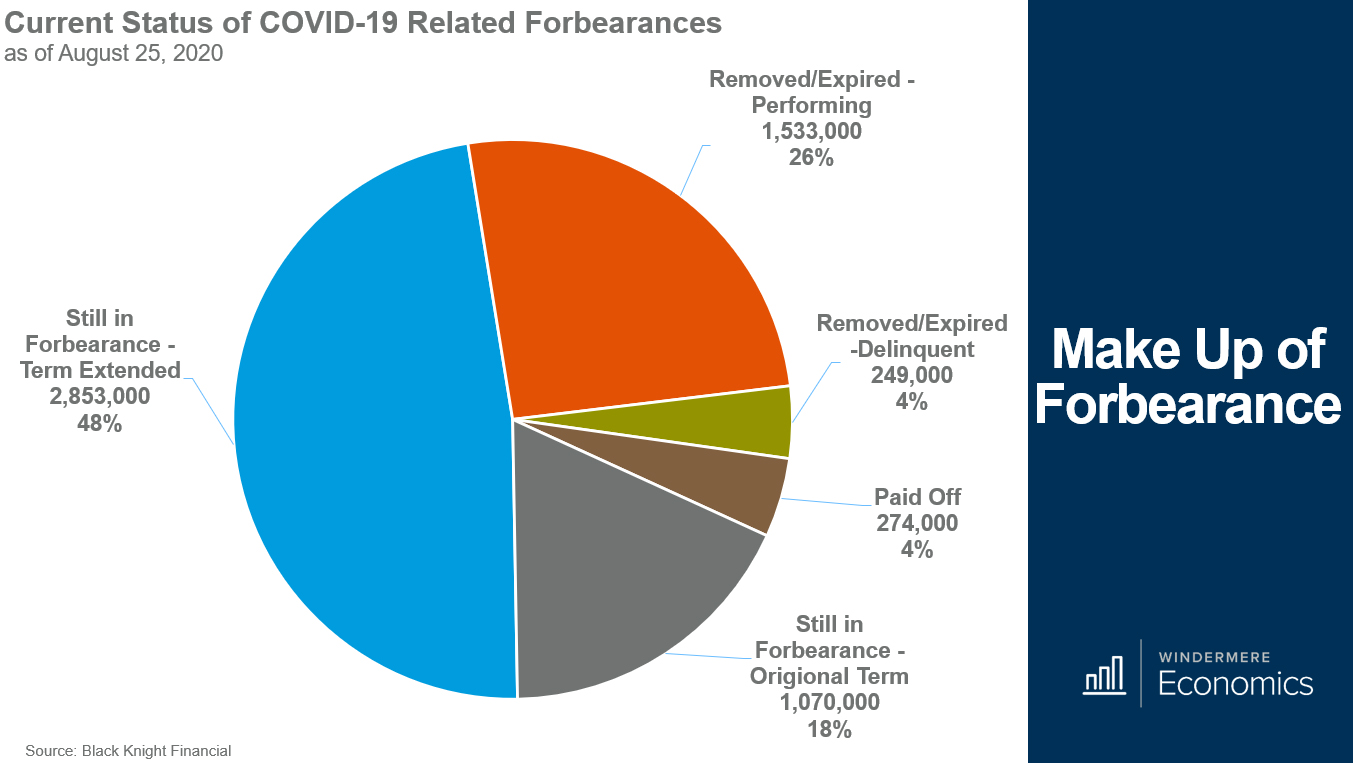 There were also 274,000 homeowners who paid off their mortgages either through refinancing or by selling their homes. Finally, another 249,000 are no longer in forbearance but are still past due on their mortgages. And on the left, you see that 2.85 million owners have had their forbearance terms extended.

But when I think about these homes, I really don’t see a wave of foreclosures occurring because the market is very healthy. Even these owners hold some equity in their homes. Even if they can’t get back on their feet, I anticipate that many are almost certain to sell their homes and get the equity out of it rather than go through the foreclosure process.

So, I’m worried about a quarter of a million homes but, to put things in perspective, during the 2008 housing crisis, almost 10 million Americans lost their homes. That’s a number that dwarfs what is happening today.

So, there you have it. My update on the forbearance situation.