This week, we’re going to take another look at mortgage rates, as there have been some significant changes. More importantly, I’m starting to see some clouds on the horizon that you should all be aware of.

As a reminder, this chart shows 30-year rates since the mid-1970s and, I will be honest with you, as often as I look at it, it still amazes me. From a peak of over 18 percent in the early ’80s, mortgage rates are now below 3 percent — something I don’t think anyone could have believed possible. 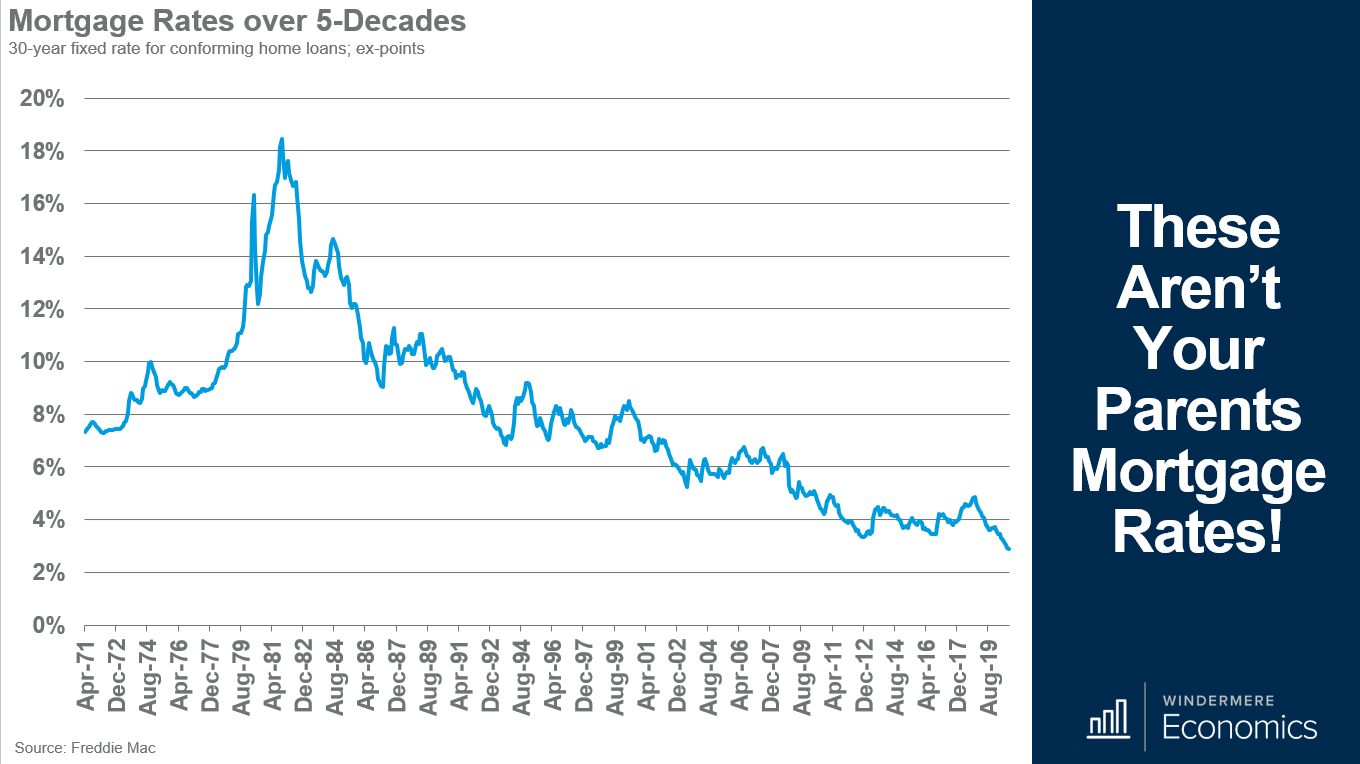 Just look at that! It’s amazing to think that the relative advantage of an adjustable loan — quite frankly — no longer exists! 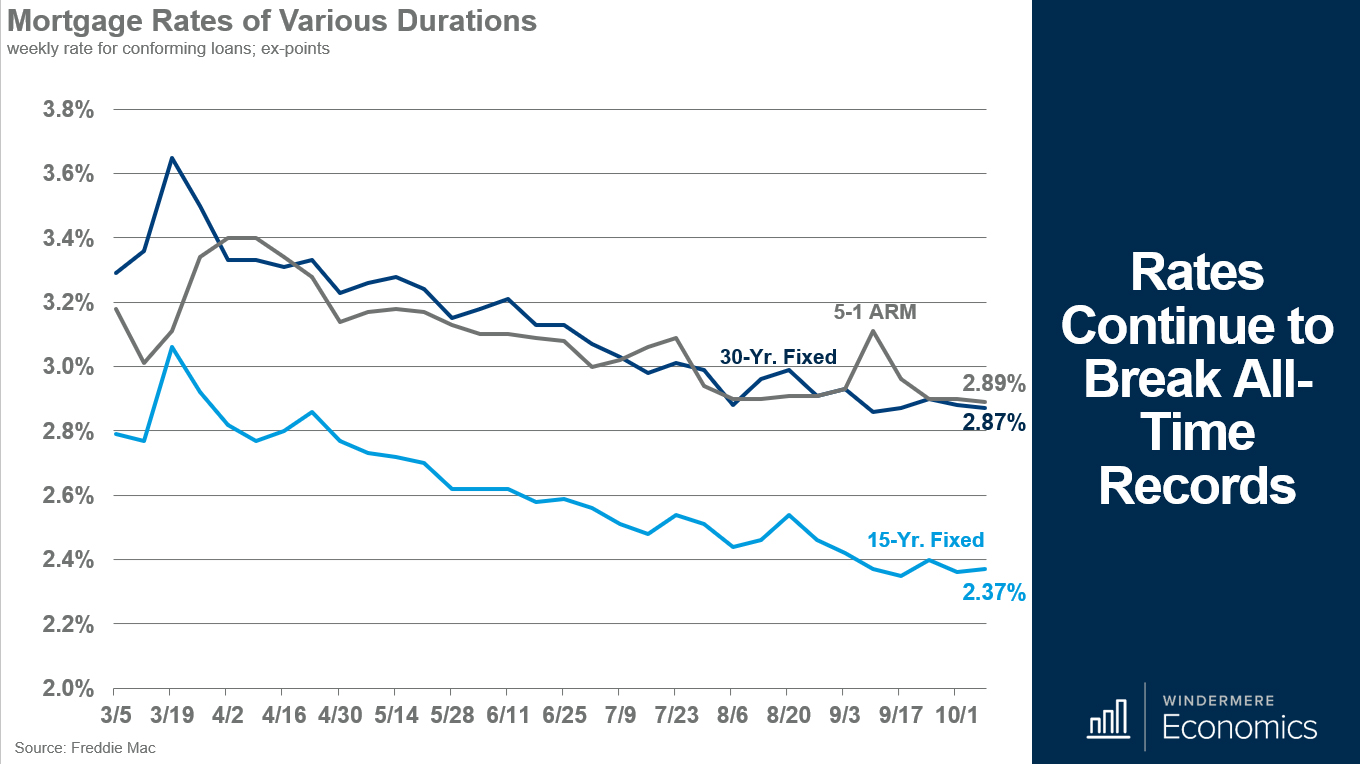 Many of you heard me say that the ownership housing market has been a beacon of hope as we move through the pandemic, and much of the reason for this is that rates have never been lower.

With rates at their current levels, it’s hardly surprising that buyers are out in droves. We know this with data showing new mortgage applications up by a massive 25 percent from the same week a year ago. 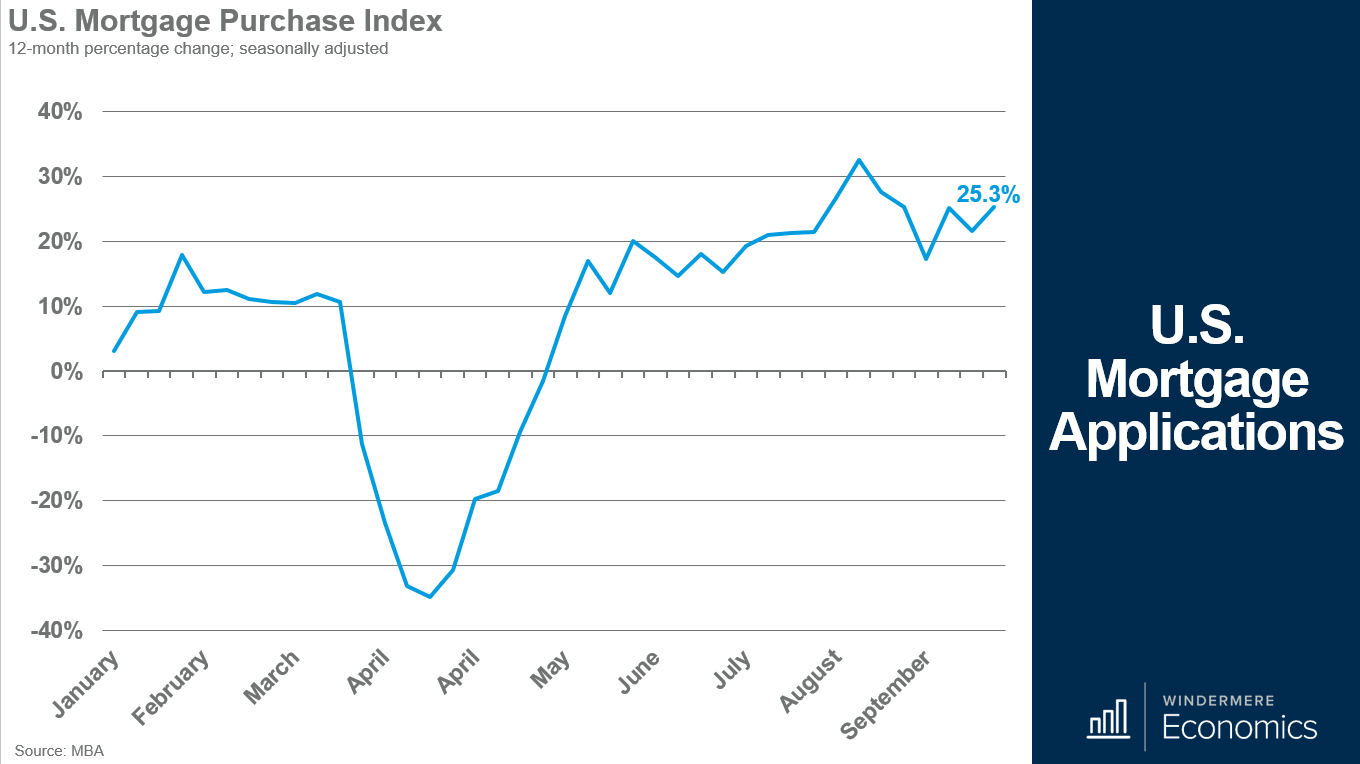 This is also supported by data from the National Association of Realtors (NAR) whose Pending Home Sales index jumped by 8.8 percent month over month in August and is now at an all-time high.

So, we know that buyers — who appear to be pretty much ignoring the pandemic — are very active, and rates are very, very attractive, but some of you may be wondering how long they can stay this low.

Well, here is where I see rates next year. However, it’s always good to take a look at what others economists are thinking too, so I’m including the latest forecasts from some of my industry colleagues.

You can see that we’re all in a pretty tight range, but I must say that I was a little surprised to see Fannie Mae and Wells Fargo forecasting average rates for next year holding below 3 percent. 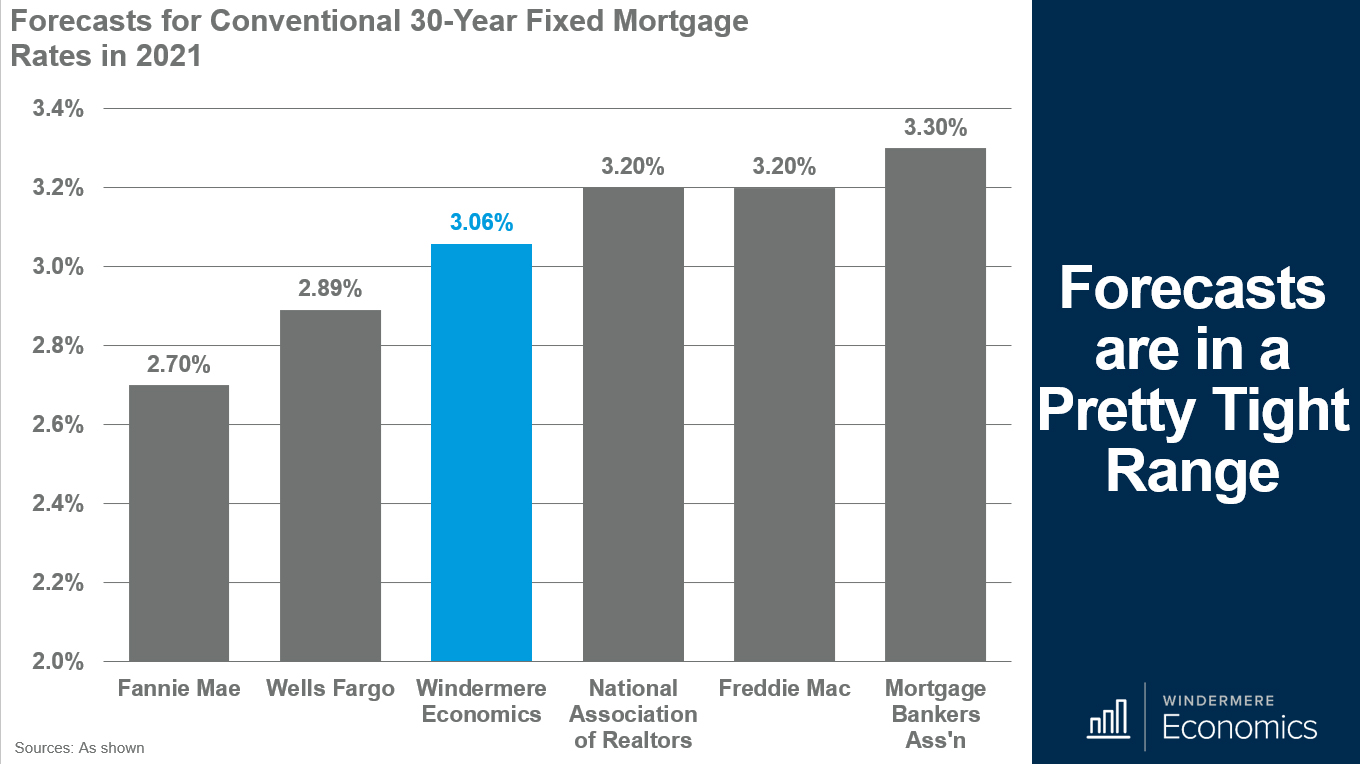 So, all this sounds wonderful, right? Well, before we all get too carried away, I’ve been playing around with some numbers, and I’m seeing a trend that’s starting to worry me just a little.

We know that rates have dropped significantly over the past year, and this has allowed buying power to increase. Some of you may remember me saying that for every 1 percentage point drop in rates, buyers can afford to pay 10 percent more for a home, and rates on the 30-year are 0.9 percent below their 52-week high.

The trouble is that I just don’t see rates dropping much further. Buyer demand is causing home prices to rise at a far faster pace than rates are dropping, and surging prices are starting to wipe out some of the affordability benefits produced by these record-low interest rates.

Here’s an example to show you want I mean. Now, I’m going to ask you to hang with me on this, as I think that you’ll find it interesting.

So, let’s say that this home sold in August for the U.S. median price of $310,600, and the effective mortgage rate at the time was just a hair over 3 percent. Including taxes and insurance, the monthly payment would be $1,047. So, the buyer had to be making a salary of $59,476 to be able to qualify to buy it. Still with me? Good.

Let’s say the same house was sold back in February — again for the U.S. median price that month, which was $270,400. Back then, the mortgage rate was higher at 3.62 percent. That meant the payment would have been $986 per month, and that required a salary of $56,833. What does this mean? 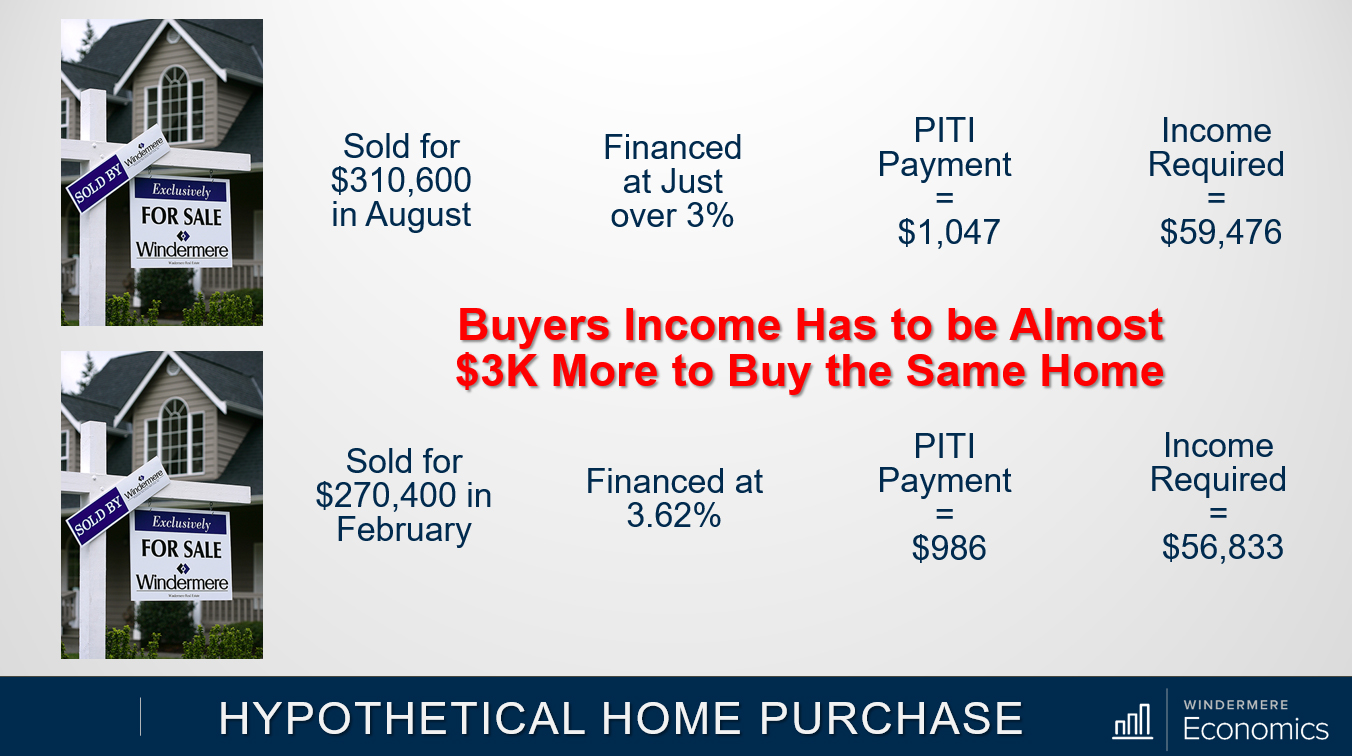 The point is this — even though rates have dropped, the income required to buy that home had to be higher because home prices were rising at a faster pace than mortgage rates were dropping.

Low rates have grown demand significantly, but because there are so few homes available to buy, prices have jumped. That has done one thing — it’s impacted housing affordability. And that’s a problem.

Of course, we can solve this by increasing the number of homes for sale. However, we can’t force people to move, so we need to build more. But again, as I have shown in past videos, new construction is just not keeping up and is unlikely to be much help — at least not in the near term.

Not to mention, current homeowners may have another reason not to move, and it’s this: Rates dropping has been great for existing homeowners, and it’s allowed a lot of them to refinance their homes.

This chart looks at refinance activity, but specifically the spread between the rate that owners had originally to the rate they refinanced into. What’s amazing is that owners who refinanced in the second quarter of this year saw their rate drop by an average of a whopping 25 percent. 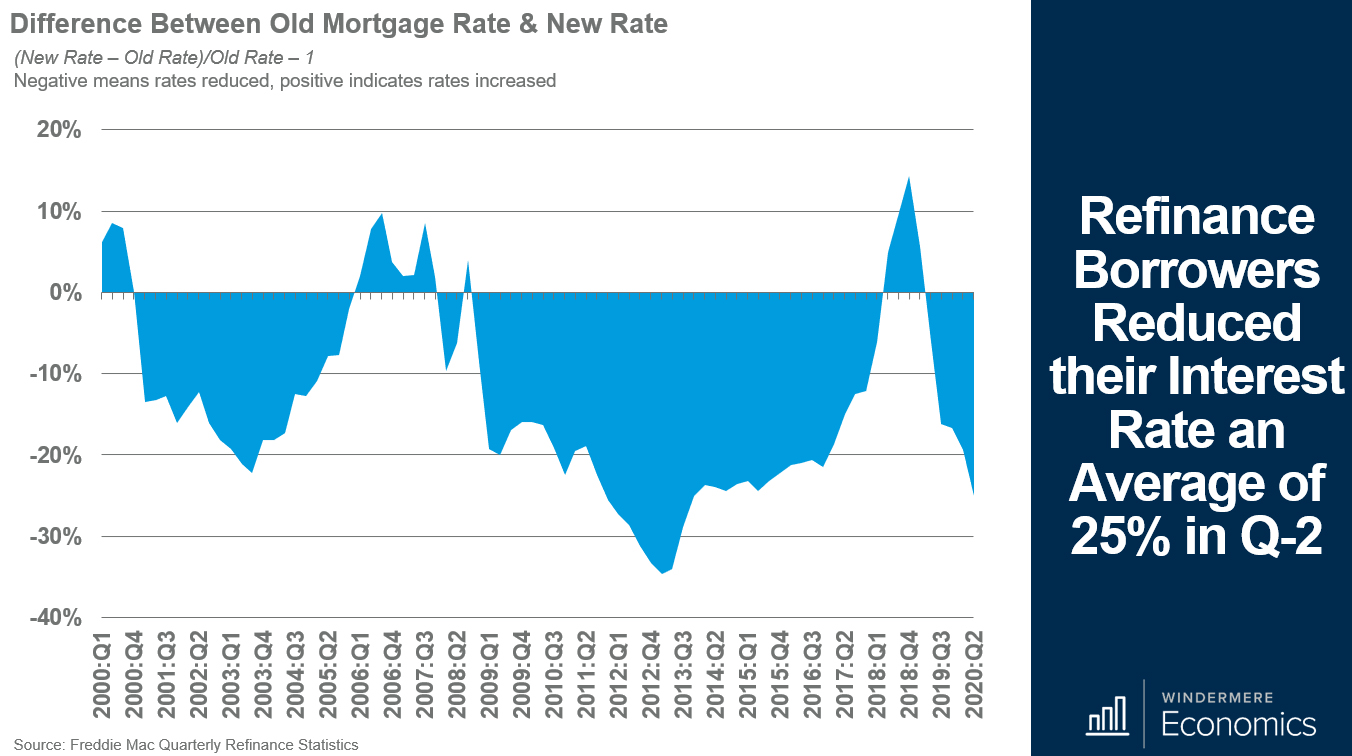 So, this is what I’m thinking. Imagine you’re one of those homeowners who have refinanced, and you’re sitting on an historically low interest rate. Now, imagine that it’s 2022 or 2023, and the rates have risen — likely quite significantly from present levels. The question will be: Are you going to sell and lose the historically low rate, or are you going to stay put?

I’m suggesting that we may be heading toward a period where we see houses turn over at a far slower pace as we stay in our homes for longer than ever. This could be a problem as it might lead to persistently low levels of inventory for sale, which might lead to prices continuing to rise at an above-average pace, and that would further hit affordability.

Now, this isn’t going to be a permanent problem. Rather, it’s one that we should be aware of, as it has the potential to impact the market for a period of time.

So, there you have it. Even though mortgage rates are unlikely to rise significantly for some time, we should all be aware that there could be consequences.