Looking for a little clarity on this week’s news? Windermere Chief Economist Matthew Gardner discusses home sales across the U.S. and concerns over the unsustainable pace of price growth.

Although there were only three data releases of interest last week, they are major ones — so let’s get straight to it. Last Monday, the National Association of Homebuilders released their Housing Market Index for October, and the numbers were pretty mind-blowing!

Builder confidence rose by two points to 85, and that broke the record that was set just last month. It’s also worth noting that September and October were the only two times that the index has broken above 80 since the index’s inception back in 1985. 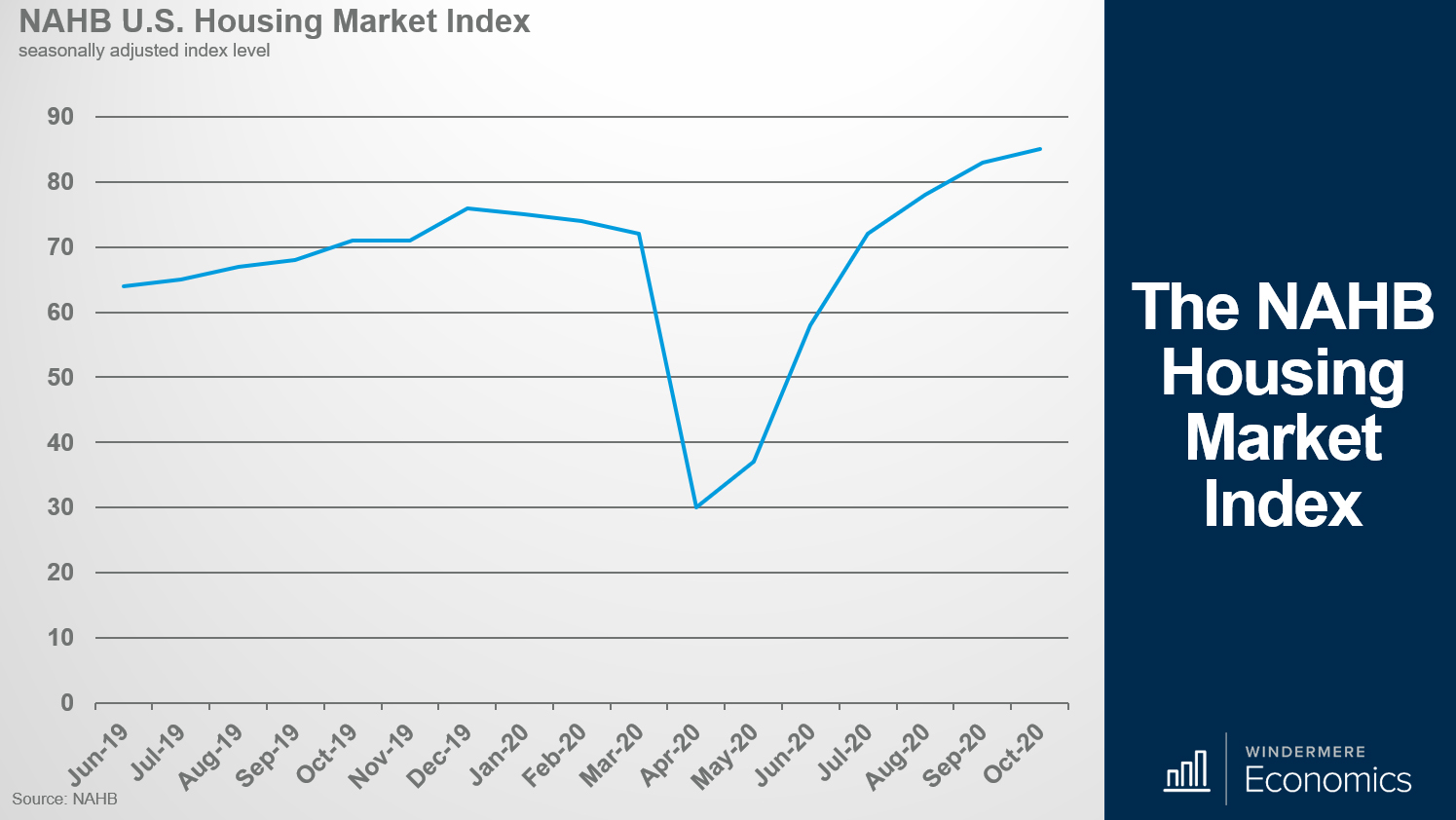 Record-low interest rates are clearly boosting demand, but I also believe that what we are looking for in a house has changed. COVID-19 has generated far greater interest in the suburbs, exurbs and small towns, and that’s where most of the new development is occurring. 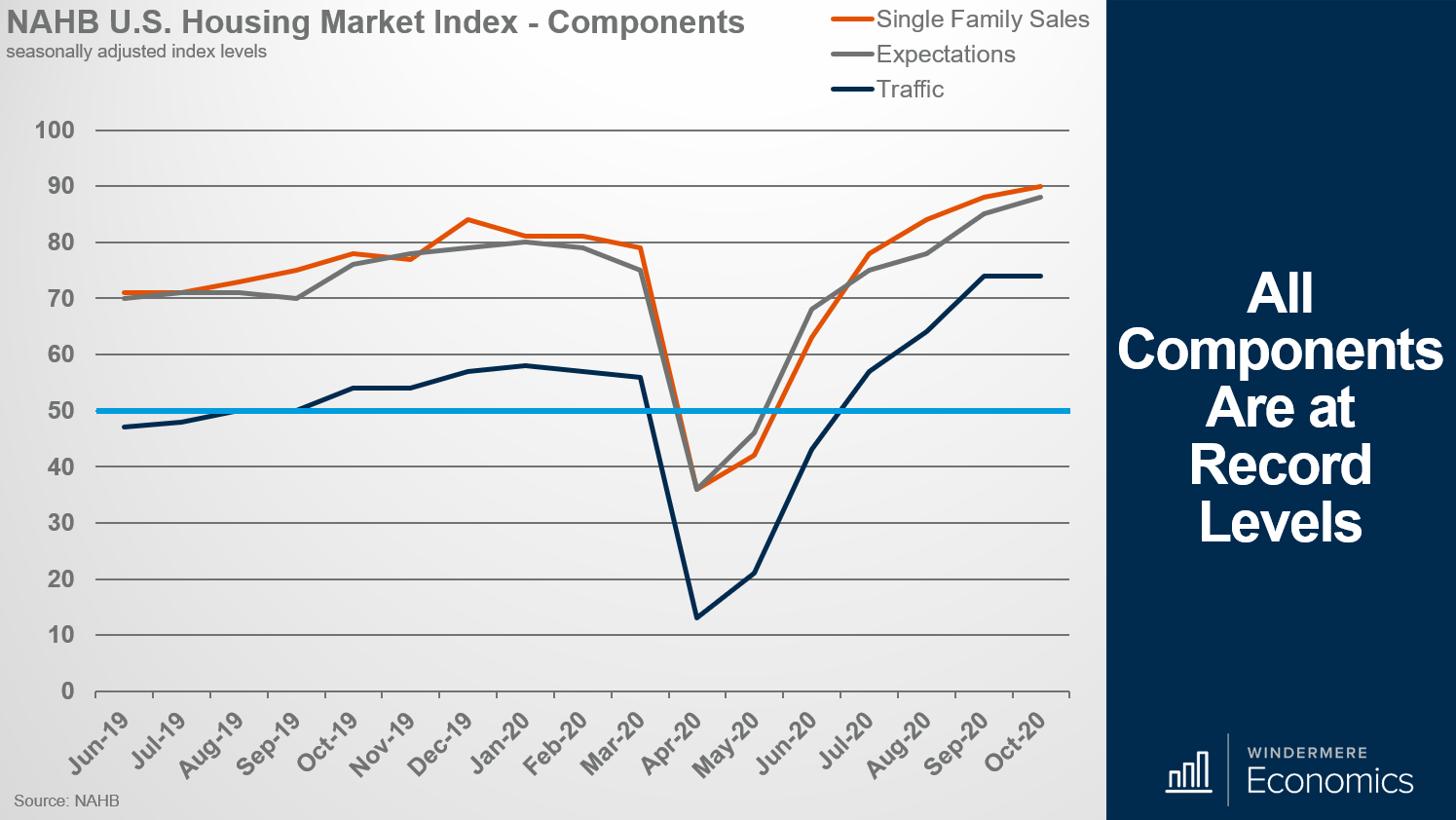 Any reading above a 50 indicates that more builders view industry conditions as good rather than poor, and all the individual components of the index — builders’ views of current and future sales conditions as well as traffic — are all at record levels.

Let’s start off with permits — and I’m just looking at single-family permits here. They rose by 7.8 percent to an annual rate of 1.12 million units, a number not seen since 2007.

Interestingly, the number of developments that have been permitted but haven’t yet started also rose in September to the highest we’ve seen since 2018. Hopefully, that means more supply down the road.

Single-family starts jumped by 8.5 percent to an annual rate of 1.11 million units last month. That’s another huge number, and as we saw with building permits, the last time that starts were this high was also back in 2007. 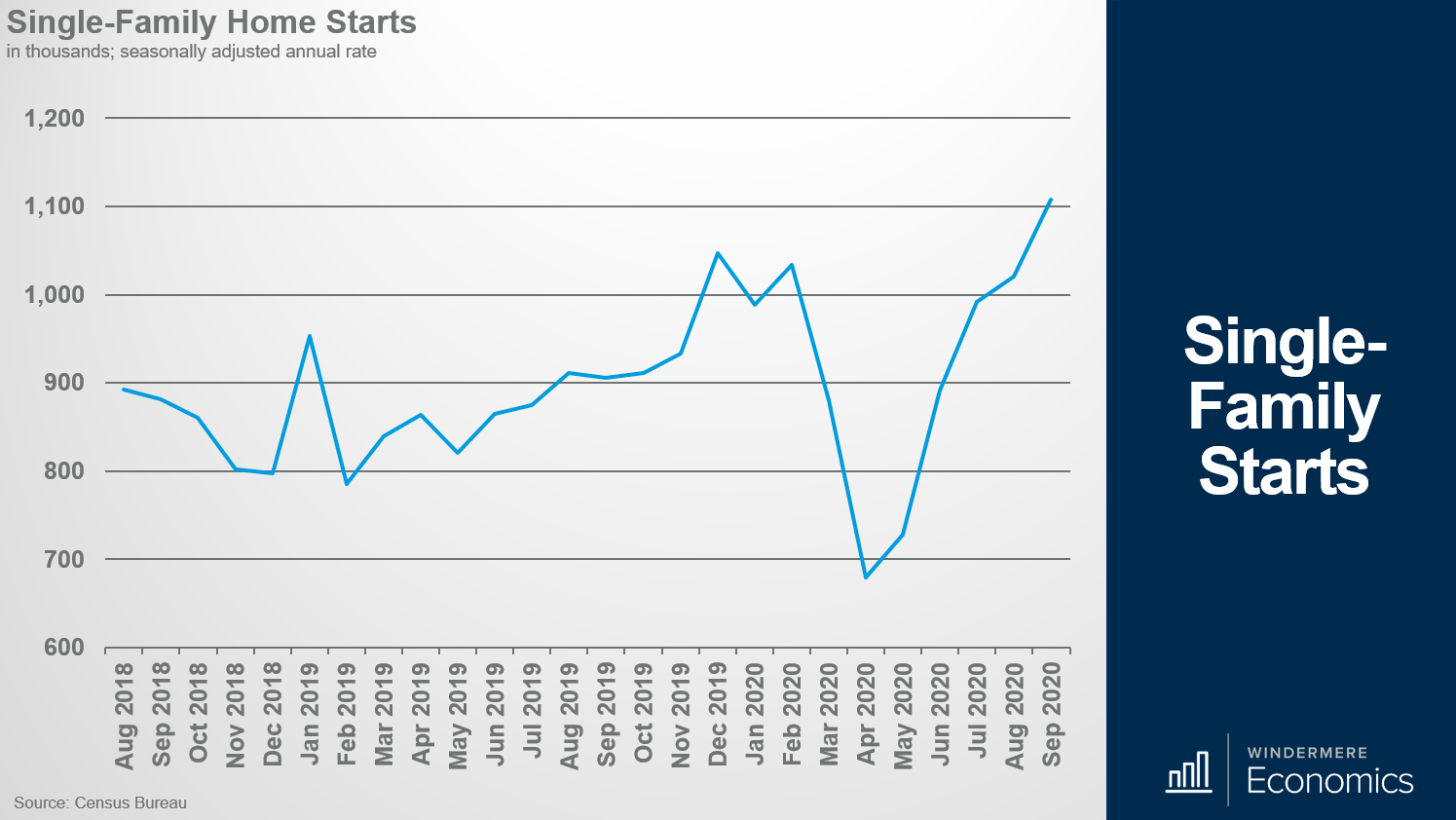 These were all pretty amazing numbers, but before you start getting too excited, I have to reiterate my concern that very high material, land and labor costs are making it remarkably challenging for builders to bring homes to market that buyers can afford. Only time will tell if they are able to find a way around this issue.

Last, but by no means least, the big one — existing home sales across America. Wow! Sales jumped by 9.4 percent in September to a seasonally adjusted annual rate of 6.54 million units. 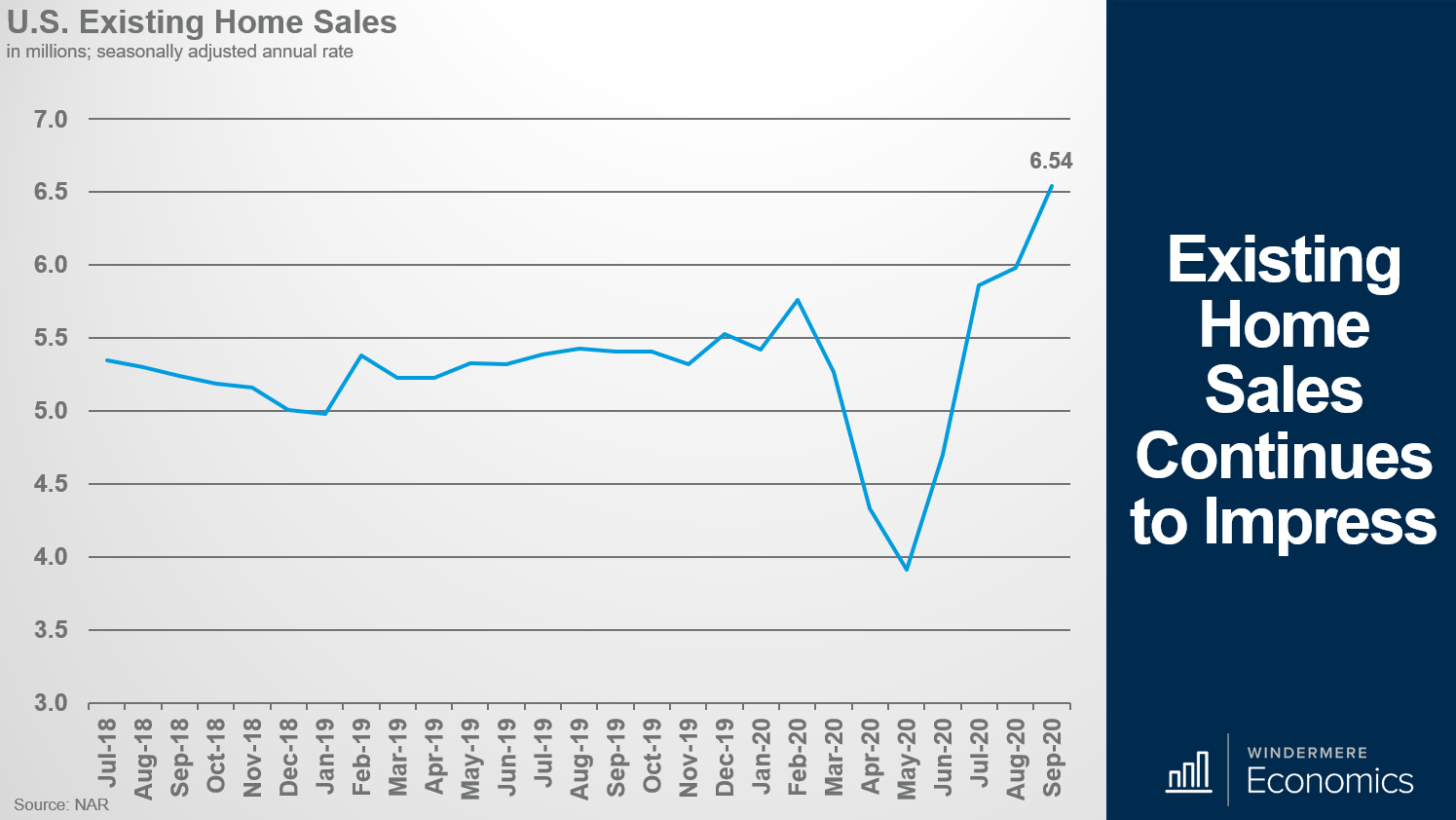 Now, some of you may remember me saying that I was expecting to see solid numbers as we moved through the fall, but I also suggested that sales would actually be even higher if there were more homes for sale, and the data supports this, as available inventory dropped by 19.2 percent year over year to just 1.47 million units.

At the current sales pace that’s only 2.7 months’ of supply — the lowest number since the Realtors began tracking this back in 1982.

It’s also worth mentioning that the data showed vacation and resort home sales up by 34 percent year over year. This further reinforces my belief that more people are moving to wherever they want because of their ability to work from home.

But it’s not just that. I also think that because of COVID-19, many are buying resort homes as a replacement for traditional hotel-based vacations.

Tight supply continues to push prices higher with the median sale price in September coming in at $311,800. That’s up by 14.8 percent when compared to a year ago, and the fastest pace of growth since the data first was collected all the way back in 1968. 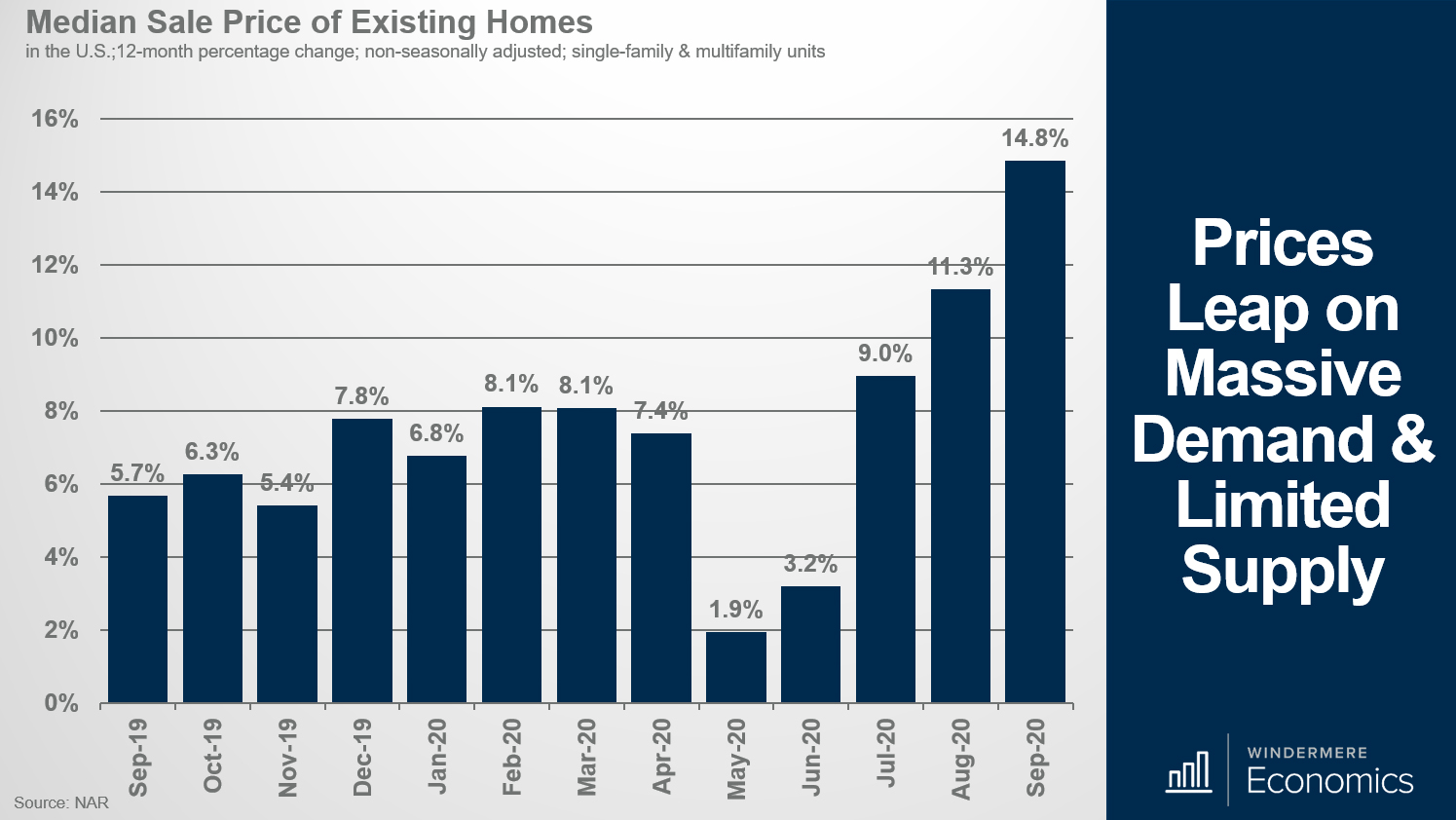 Unsurprisingly, supply is lowest at the bottom end of the price spectrum, and that’s causing prices to rise faster there than at more expensive price points.

When we look at just single-family homes, again, we see incredible numbers. Annualized sales came in at almost 5.9 million — up 21.8 percent year over year and also up by a very significant 9.7 percent when compared to August of this year. 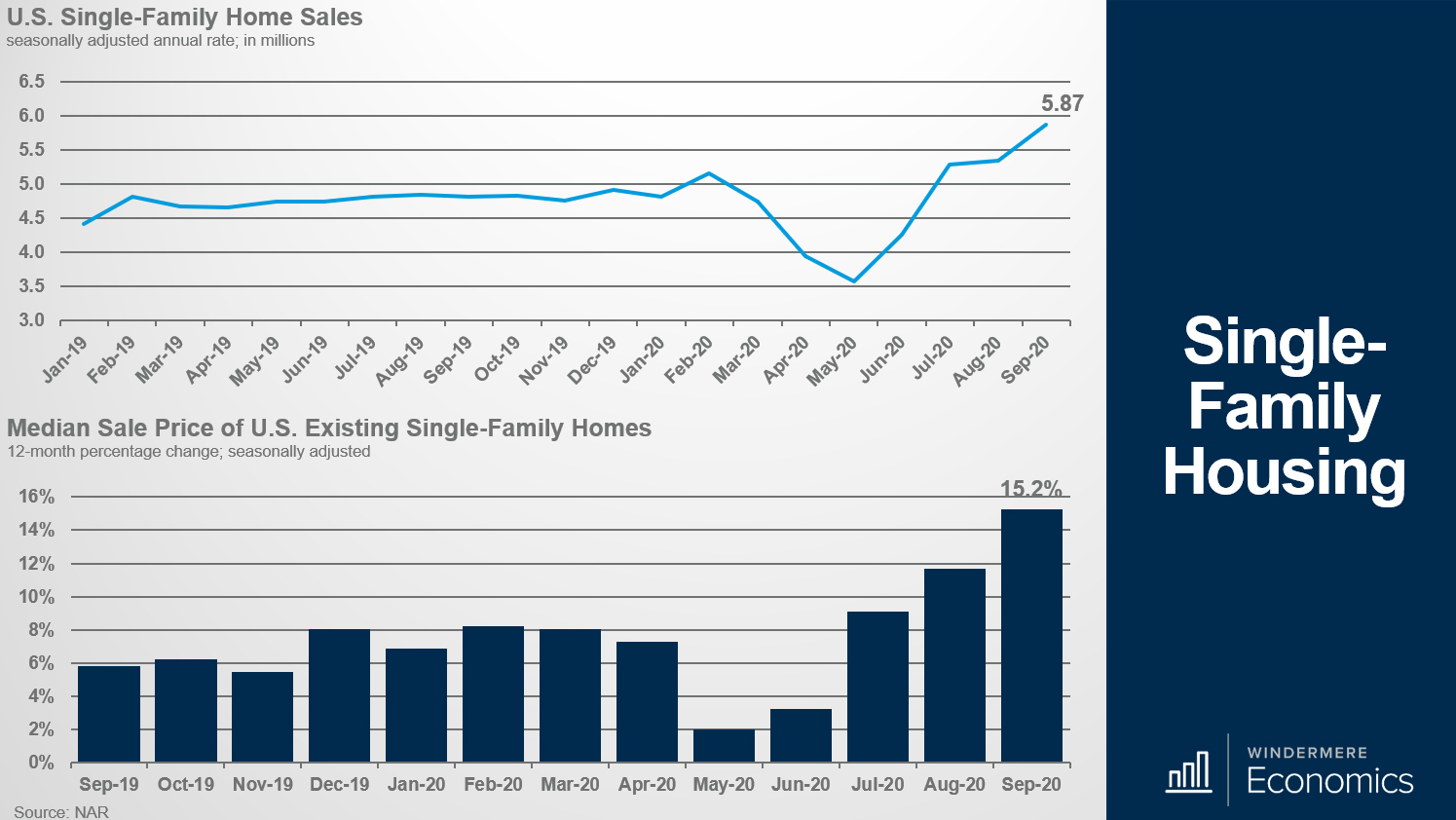 The market remains very tight with just 1.2 million homes for sale and months of supply coming in at 2.5 — another record low. And prices are naturally reflecting massive demand and limited supply, with the median sale price measured at $316,200. That’s up by 15.2 percent when compared to a year ago. We haven’t seen this pace of price growth since back in 2005.

And the numbers in the multifamily arena were also positive, but not by quite as much. Sales were running at an annual rate of 690,000 units — up 13.6 percent year over year. 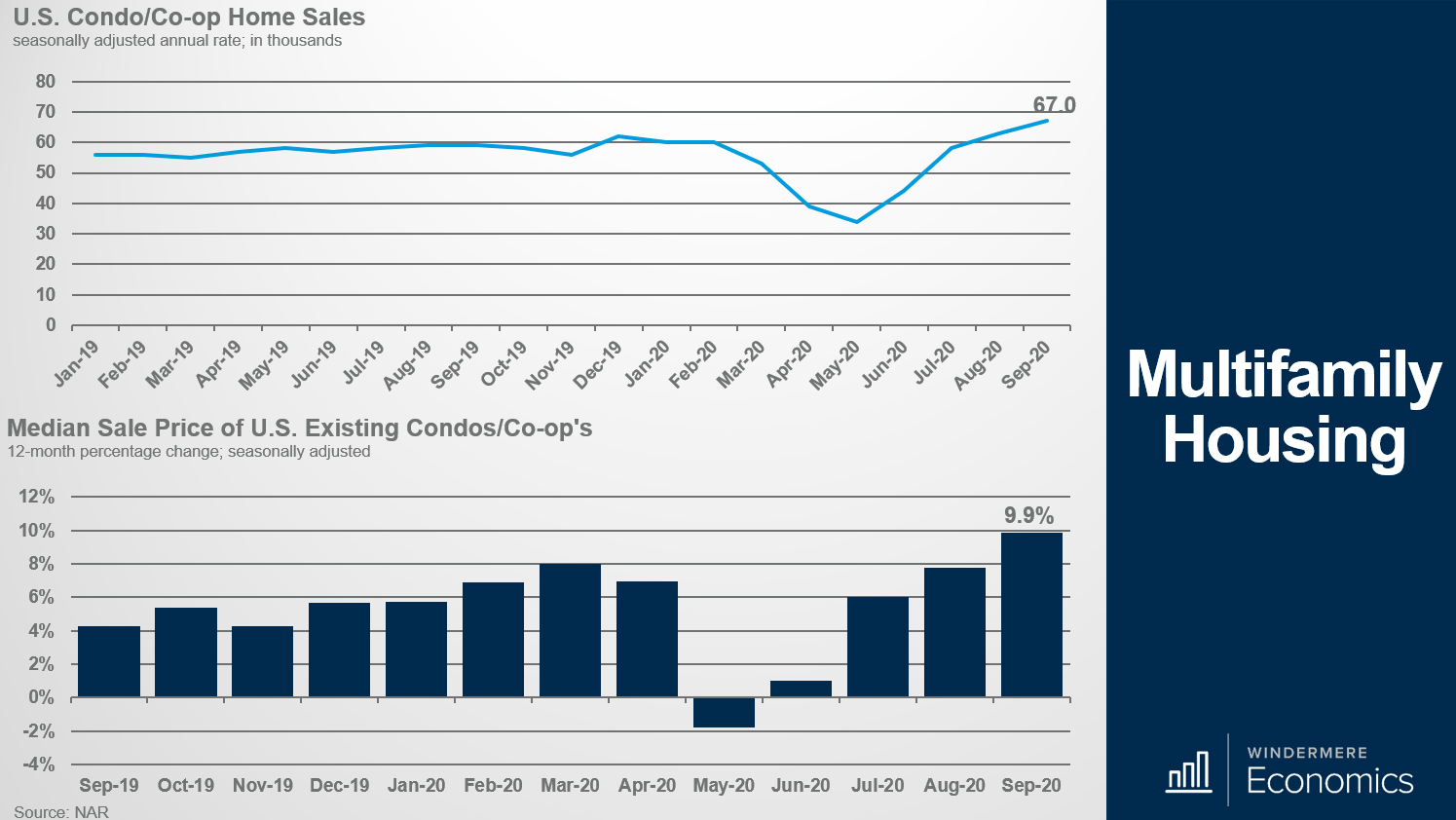 There are 226,000 units available, a relatively low number, but inventory levels have been rising for the past several months. I’m thinking that COVID-19 is possibly leading to more owners to come to market. That said, there still appears to be demand as prices rose by almost 10 percent, but sale prices were down by 0.2 percent when compared to August.

I’m not worried about this right now, but there is four months’ of inventory, so it will be worthwhile watching how the multifamily market acts as we move through the rest of the year. But more importantly, I will be watching what happens next spring.

So, there you have it, and I think you’ll agree — these were pretty impressive numbers across the board. No one can deny that housing continues to outperform, but I will again reiterate my concerns over the pace of price growth. It’s absolutely not sustainable, and it has to start tapering off at some point — but not quite yet!