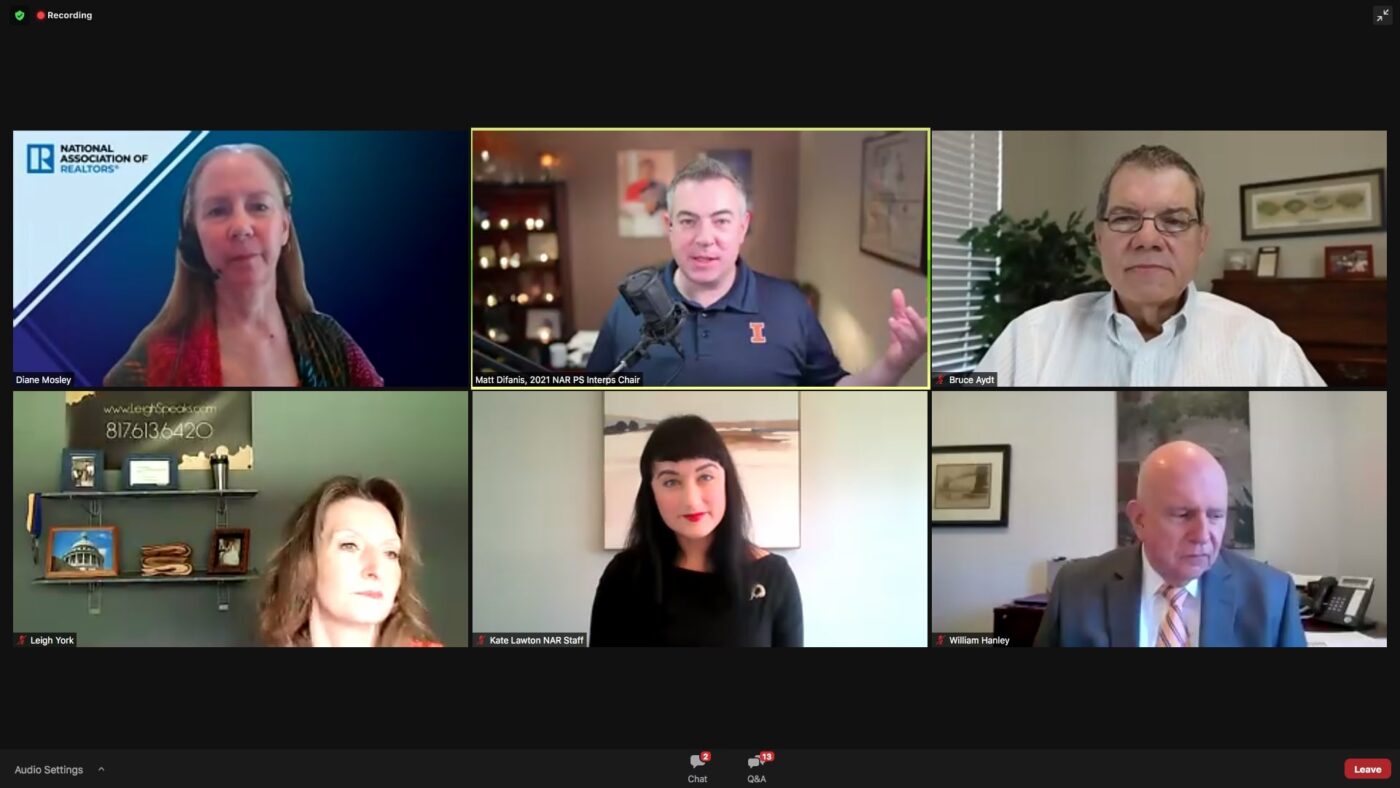 Discussion around a new hate speech policy from the National Association of Realtors has largely focused on fairness toward those who may be accused of violating the policy. But some members have questioned the lack of diversity among those who will be deciding the outcomes of such ethics complaints.

Discussion around a new hate speech policy from the National Association of Realtors has largely focused on fairness toward those who may be accused of violating the policy. But on the other side, some members have questioned the lack of diversity among those who will be deciding the outcomes of such ethics complaints — a problem the 1.4 million-member trade group says it is working on.

In November, NAR’s board of directors approved controversial changes to its professional standards to crack down on racist and discriminatory speech and behavior.

One of the policy changes, Standard of Practice 10-5, reads as follows: “Realtors must not use harassing speech, hate speech, epithets, or slurs based on race, color, religion, sex, handicap, familial status, national origin, sexual orientation, or gender identity.”

On Monday at NAR’s midyear conference, the Realtors Legislative Meetings, the trade group’s Professional Standards Committee approved four case interpretations for the new policy, despite pushback from some members who objected to one of the interpretations on religious grounds.

In the last of six monthly training webinars NAR hosted in the wake of the ethics changes, some attendees pointed out the lack of visible diversity on the webinar panel and wondered about the diversity of the 100-member committee in general.

“With regard to the full committee, I think there is not a tremendous amount of diversity,” Kate Lawton, NAR’s vice president of member experience, told attendees.

Asked whether any sessions at the Realtors Legislative Meetings this week and next will discuss diversity in association professional standards committees, NAR spokesperson Troy Green told Inman there isn’t any discussion specifically geared toward the makeup of such committees.

“However, NAR members are working on putting forth a strategic direction to foster more inclusiveness and diverse participation in governance committees at local, state, and national levels,” Green said via email.

No different than an ‘all-white jury’

Matt Difanis, chair of the committee’s Professional Standards Interpretations and Procedures Advisory Board, said the group was “painfully aware” of its lack of diversity and noted that the national committee is composed of volunteer members who first serve on their state or local association professional standards committees.

“This really requires that state and local leaders proactively work to recruit more inclusive groups of volunteers, and make sure to ensure that members of color are not exclusively stacked up in diversity, fair housing or other committees concerned with DEI [diversity, equity and inclusion],” Difanis said.

“There’s this concern [that] an all-white panel, if you have members of color that are the parties, is going to immediately lose credibility before anyone’s uttered the first word at a hearing, no different than a Black party in a criminal matter being judged by an all-white jury of their peers,” Difanis said. “We know that’s a big deal.”

He noted that, due to the pandemic and more local associations handing off pro standards enforcement to state associations, more hearings are held virtually, “which means we have a bigger, more diverse pool of volunteers who don’t necessarily have to drive across their state for hearings.”

“We take all of that very seriously, and I cannot wait until the time in the near future, when groups and panels like this will have a greater variety of complexions,” he added.

Difanis said the advisory board was made up of perhaps 20 percent or 25 percent non-white individuals as well as members of other minority groups, “so we’re way more diverse than we used to be.”

Still, Difanis said increasing the committee’s diversity was “an obsession” and encouraged members that don’t “look like me” — which he clarified didn’t just mean by race or gender but also LGBTQ status and disability status — to get involved with professional standards locally.

“While it is very, very important to get a more inclusive-looking group that better reflects the inclusivity of the members that we serve, you can’t land on NAR’s full pro standards committee or ‘Interps’ advisory board right away,” Difanis said.

“You really have to have some prerequisite experience. So if you’re somebody who doesn’t have any experience yet, please, please, please get involved at your local or state pro standards level because even a couple of years of experience as a volunteer there can get you what you need so that we can take advantage of your skills.”

While there are requirements to join an NAR committee, anyone has standing to file a complaint under the Realtor Code of Ethics, Difanis reminded attendees, pleading with them not to make someone targeted by discrimination be the person to have to file a complaint.

How many all-white ethics panels?

How many professional standards committees and ethics hearing panels of local associations are all-white? NAR does not know because it does not track the demographic information of local association ethics enforcement volunteers, NAR spokesperson Mantill Williams told Inman via email.

“NAR does not ask committee applicants to identify their membership in every protected class under state and federal law or the NAR Code of Ethics,” Williams said.

“We remain committed, however, to ensuring the leadership experience at the national level is inclusive of the diverse viewpoints and perspectives of NAR’s 1.4 million members through targeted efforts to improve our engagement with new members and our ongoing work with various multicultural real estate groups.

“We also continue to work to improve communication and transparency within the committee application process.”

Asked whether people that bring complaints in which they allege a minority group was targeted should be concerned if their complaint is being heard by an all-white panel, Williams said, “Parties to an ethics complaint are ensured due process through a multi-step process detailed here that includes the ability to challenge the qualification of hearing panel members that the parties believe may be biased, and to appeal a hearing panel’s decision if parties feel the panel was biased.”

NAR recently unveiled a mentorship program, NAR Spire, that will match Realtor mentors with mentees who are professionals “from historically marginalized communities with the goal of eliminating barriers that have denied opportunities for homeownership and kept people out of America’s real estate industry,” the trade group said in a press release. The program is launching in nine pilot areas: Chicago; Memphis, Tennessee; Raleigh and Durham, North Carolina; Rochester, New York; Trenton, New Jersey; Seattle; Washington, D.C.; and the state of Maryland.

Mentees will learn about the fundamentals of the real estate industry and receive education on business operations, marketing, appraisal, information technology and finances, according to NAR.

“We’ve reached beyond NAR’s walls to collaborate with partners across a number of industries, and we’re confident this program will help Realtors enhance their reputation as invested, engaged and integral members of every U.S. community.”

NAR encouraged Realtors interested in increasing diversity in real estate and expanding their influence across the industry to apply to be mentors.

Controversial proposal to require addresses on MLS listings is back
Back to top
Inman Connect Las Vegas is back and there are only a few presale tickets left! Register today before they're gone.REGISTER×
Inmanpot
Log in
If you created your account with Google or Facebook
Don't have an account?
Create an Account
Forgot your password?
No Problem