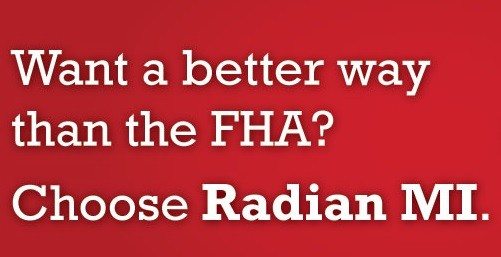 And it has potentially far-reaching significance not only for large numbers of first-time and moderate-income home buyers this year, but for the dominant source of low down payment mortgages many buyers depended on during the past several years: FHA.

The new “720” jingle, used in advertisements by Radian Guaranty Inc, one of the highest-volume players in the industry, refers to FICO scores and spotlights the steadily rising cost of FHA insurance premiums compared with private competitors.

As the result of those fee increases — the most recent hike in premiums took effect April 1 — and the impending revocation of the right to cancel premiums for most new FHA borrowers starting June 3, private mortgage insurers can now offer much more attractive deals to the most creditworthy homebuyers than FHA.

That has long-time advocates of FHA — and privately, some federal officials — concerned about adverse selection. Private insurers appear likely to start “creaming” the best of FHA’s current customer base — the low credit-risk, 700+ credit score borrowers who have provided the bedrock for FHA’s vaunted, high quality 2010-12 books of new business, which Commissioner Carol J. Galante calls “the strongest in agency history.”

This, in turn, could leave FHA with a preponderance of borrowers who have the lowest scores and present the highest risk of future default and foreclosure — a trend that could put new strains on the agency’s insurance funds and eventually increase the odds that it may need to either seek a Treasury bailout or raise fees again to pay for the losses.

Though top FHA officials declined my request for comment on the politically sensitive subject of adverse selection, Galante is not concerned about losing market share to the private mortgage insurers. To the contrary, she appears to welcome it. When I asked her where she would like to see FHA’s overall share of the mortgage business, she said “around 10 percent.”

By the agency’s own estimates, during fiscal 2012 it had a 14.6 percent share, including refinancings and home purchases. But in some key segments of the market, its presence is much bigger. Fifty percent of African-American home purchasers in 2012 used FHA loans, according to agency estimates. Roughly 40 percent of Hispanic and Latino buyers depended on FHA insurance last year as well.

“FHA has played a vital part in ensuring access to credit for borrowers,” Galante testified recently to a congressional committee. “Yet its current outsized role should and will decrease.”

In a budget message last week to FHA lenders, Galante cited the recent fee increases and other volume-depressing steps the agency has taken as essential not only to generate higher revenues and strengthen insurance reserves but to “ensure that FHA does not take on additional market share.”

Fine. But what if by sending the lowest-risk and highest revenue-generating customers fleeing to private mortgage insurers, FHA ends up with rising percentages of borrowers more prone to go late on payments, rack up costly claims and go to foreclosure?

Officials insist that FHA’s underwriting rules — full documentation of income and employment, strict appraisal standards, stepped-up counseling efforts and forthcoming restrictions on seller concessions — should protect it from losses. But even long-time friends and admirers of the FHA program are uneasy about the potential for adverse selection.

Brian Chappelle, a former FHA official and now head of Potomac Partners LLC, a housing and mortgage consulting group based in Washington D.C., says there is “no question that adverse selection is a concern in the FHA program today. In fact, it could be argued that (it) is the most significant policy threat to the program going forward.”

Nonetheless, Chappelle said he’s confident that FHA’s leadership “will move quickly to address problems with adverse selection if they materialize.”

Just how much more attractive to higher credit quality buyers are the private mortgage insurers compared with FHA in the wake of its recent series of cost increases and policy changes?

For starters, keep in mind that although private insurers can give special pricing preferences to applicants with high scores, FHA is basically a “one price fits all” insurance company. Its premiums are not set using the risk-based pricing that is the hallmark of the insurance business.

Consider this comparative example that United Guaranty, another large mortgage insurer, uses to lure the best customers away from FHA. Say you or your buyer clients need a $200,000, 30-year fixed-rate mortgage. The buyer has a 720 FICO and a debt-to-income ratio of 31 percent.

Though United Guaranty requires a 5 percent down payment — 1.5 percentage point higher than FHA — buyers would owe $10,295 in borrower-paid premiums over the life of the loan under current rules.

Using an FHA loan, by contrast, United Guaranty estimates buyers would pay $23,539, factoring in the most recent premium hikes as of April 1. After June 3, when most new borrowers will lose their right to cancel premium payments , buyers would pay $49,912 over the life of the mortgage — almost five times the amount paid for private insurance premiums.

Buyers using private insurance enjoy a congressionally-guaranteed right to terminate their premium payments once their loan-to-value ratio declines to 78 percent. Under FHA’s policy taking effect in June, only borrowers who make 10 percent down payments will have a right to cancel premiums, after 11 years.

“Isn’t it time to ask why you’re still using FHA?” asks United Guaranty in a promotion. Radian, MGIC, Genworth and other insurers are pumping out the same message to loan officers, mortgage brokers and consumers: If you’ve got good credit, come to us and pay less.

It’s a powerful question — one that FHA, and ultimately Congress, will have to come to grips with.