by Glenn Roberts Jr.
Share this article
You successfully shared the article.
Close 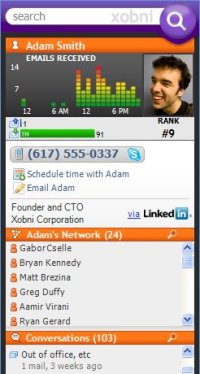 And while the freely downloadable Xobni application — its name is "inbox" spelled backwards — is still in its infancy, it’s no surprise to find real estate professionals among its early adopters.

And while the freely downloadable Xobni application — its name is "inbox" spelled backwards — is still in its infancy, it’s no surprise to find real estate professionals among its early adopters. Networking is a critical component of the real estate trade, and many agents have latched on to online networking sites such as LinkedIn and Facebook — Xobni integrates information from both of these networks.

The company was launched by founders Adam Smith and Matt Brezina in mid-2006, and has attracted millions in venture funding as well as praise from Bill Gates, who referred to Xobni as "the next generation of social networking" while demonstrating the product to a group of developers in early 2008.

The TechCrunch blog in April reported on a rumored deal in the works by Microsoft to acquire Xobni, though no such deal has been announced.

Xobni piggybacks on the Microsoft Office e-mail program, searching through message archives, sorting out contact information and message threads, calculating statistics, and displaying the information in a sidebar.

Product upgrades rolled out in November allow users to access their personal Yahoo e-mail accounts from Xobni and also feed information about contacts and their companies from LinkedIn and Facebook and business information source Hoovers.com. Xobni also offers an integration with Internet-based phone service Skype that allows Skype-to-Skype calls and instant messaging by clicking on links in the Xobni sidebar.

Brezina said that the Xobni team has had access to Microsoft developers and product managers — Microsoft offers assistance to techies working with its products through its Microsoft Solution Accelerators program.

Xobni has been publicly available for about seven months, Brezina said, and is still in its beta phase. The application is expected to emerge from beta within a month or so and the company expects to launch paid services by second-quarter 2009, he also said.

Brezina said that salespeople, including real estate professionals, are viewed as a potentially strong user base for Xobni. "That type of person is the type of user who gets the most value out of Xobni. It’s a product for people-powered people," he said.

So far Xobni is sticking to the Outlook e-mail program and the Windows operating system as the core focus for its development efforts — simply because of the large market share.

And while the application is so far focused on desktop computers, "we’re very aware of the mobile needs of our users," Brezina said. "What you’ll see eventually, before we go to other e-mail clients, you’ll be able to get access to this information in a Xobni mobile (application)."

Brezina said that a company survey identified that about 3 percent of Xobni users work in real estate, based on a sampling of 300 users who recently installed the application.

While the surveys do find fluctuations in the types of users, Brezina said it’s common to find salespeople, consultants and business development professionals among Xobni users.

As a part of its paid service offerings, Brezina said that Xobni may roll out industry-specific tools to manage contacts and communications.

He said that the Outlook e-mail client is the "largest source of personal data in the world," and Xobni dives into this data trove to search out and index contact information such as phone numbers and addresses.

The application also hunts down other data, such as photos and titles, from third-party networking sites to provide a more complete picture of a person’s contacts.

A person’s e-mail signature is one of the primary sources that Xobni searches to find contact information, and the tool also features some other automated search tools to identify alternate contact numbers.

Because the automated number-grabber is not a perfect science, Xobni allows users to view where the application pulled the contact information from to check on the information before making a call.

Brezina said, "If you hover over a phone number, it will show you the actual text of the (original) message."

"Microsoft is not always known for flawless searches with Outlook. Xobni shows you the conversations you have, the files that are transferred," Reid said.

"It shows you every single document we’ve exchanged (with individual contacts). You don’t have to click through different e-mails."

He noted he personally experienced some "buggy" behavior with Xobni’s launch of the Facebook integration, and some of the statistics displayed related to communications are "more fun than anything really productive" in their current implementation.

He said, though, that he believes Xobni "could be a huge, huge company if it gets more exposure," and that the application does represent "a lot of usefulness and a lot of time-saving. Could I live without it? Yes. Would I like to? No."

He added, "It makes Outlook a lot more useful and user-friendly. I think agents would be wise to look into it."

Reid suggested that Xobni could be more powerful if it somehow integrated with blogs, as so many real estate professionals are engaged in blogging.

"If I bring up one of my clients I can see the files that are exchanged, the recent conversations, and I’ve got his telephone number there," Bailey said.

When he receives an e-mail message from a client about a pending sale, for example, Xobni will display the client’s telephone number and other information about the transaction when that message is highlighted.

Bailey noted that the telephone numbers that are automatically "scraped" by Xobni aren’t 100 percent accurate, though he noted that it is easy to scan the source of the contact information, and "I can’t think of a time when I’ve actually called somebody (using a wrong) number."

He added, "It’s not perfect, but it was free. It does a lot of things. As long as I can remember what its weaknesses are."

He typically uses Xobni to search for specific e-mail messages at least once per day, he said. "I’ve got a lot of e-mail in my inboxes … I can still search reasonably quickly."

Brezina said that Xobni is designed with the privacy of its users in mind, so that a company could not use the tool to monitor the communications analytics for individual employees.

Xobni typically takes between two minutes to 20 minutes to fully index messages stored in Outlook, with an average time of about eight minutes, he said.