It might not qualify as the most famous T-shirt in the world, but it brought Rogers Healy his 15 minutes of fame, and then some.

It might not qualify as the most famous T-shirt in the world, but it brought Rogers Healy his 15 minutes of fame, and then some.

That would be the shirt emblazoned with "Rogers Healy is my Realtor" that Britney Spears chose to wear while sashaying around Los Angeles one day in 2007 with her usual paparazzi entourage. A Spears-and-shirt photo ended up in People magazine.

"I don’t know Britney Spears, I never met Britney Spears," says Healy, who wasn’t, in fact, her Realtor. Not that it mattered much. The Dallas brokerage owner says he reaped priceless public attention — and a fair amount of business — from the Spears incident and dozens of other celebrity-meets-shirt moments he has engineered.

"I’ve never been afraid to self-promote — it’s in my personality," says the 29-year-old entrepreneur, who did a stint in Hollywood before coming back to his native Dallas to found his own real estate company.

That instinct, plus his passion for his business, landed him on this year’s National Association of Realtors list of "30 Under 30" industry successes who have built track records of ingenuity and creativity at an early age.

Healy started in the real estate business while still a student at Southern Methodist University, renting apartments to students. A week after his graduation, with a degree in psychology and advertising, he was on his way to California and ready to conquer the movie industry.

He lasted there about a year, with some minor successes, including a role in "Glory Road," a movie in which he played a basketball player (he’s 6 feet, 6 inches tall); some commercials, voiceovers and reality-television appearances, he says.

But studying how the entertainment world works, not to mention cultivating a network of contacts there, made an impression that he took back home to Dallas with him.

"The second-best thing I did was move to L.A., and the best thing was to move back (home)," says Healy. "I had a rite of passage there. It forced me to grow up and broaden my horizons."

He immediately launched back into real estate, still focusing on leasing and gradually adding residential sales. But he kept his focus on college students and those just out of school.

"In my opinion, that’s the best way to grasp clients, at an early age," he said. "They appreciate you. You can get 200 or 300 clients a year who may rent from you once or twice, and then they’ll turn into buyers."

Rogers Healy and Associates, which he founded in January 2006, has 15 agents (two of them just joining the staff in December) who handle both rentals and sales. He expects that this year the company will sell about $25 million in homes and will handle 500 leases. In 2008, the numbers were $22 million in sales and 400 leases. …CONTINUED

"That’s not great, but I’m in the infancy period of my company, and those numbers are with 13 people," he says.

He has plans for expanding into other corners of the real estate business: He recently launched The30Under30.com, a networking site for the 299 others in the business who have made NAR’s list over the past 10 years.

Last summer he hired an intern for a month just to track them down in order to set up the network. His goal is to build referrals among agents who have received the accolade.

Then there’s AgentAmigo.com, which has a patent pending. It’s a search engine for "pocket" listings, which for various reasons real estate agents haven’t entered into multiple listing services but they still seek exposure to get them sold.

Healy said he spends most of his waking hours thinking about his business, although he says he finds time for a few off-duty moments.

"I still have fun," he says. "I work out, do yoga four times a week, I go to church and I’m in a Bible study class.

"But I really do like working," he says. "I guess I am a workaholic."

Five years ago, while at another brokerage, he was brooding about how to get more exposure for his name.

"People know Realtors advertise on everything. I was sick of seeing people’s faces on grocery carts and buses. I wanted to do something that would mock the cheesiness of it and make it trendy."

So, he had the T-shirts made, and got friends to wear them to bars and to the gym.

"I started thinking: I have all these contacts from Hollywood and the entertainment industry, so I just started mailing them across the country to them, maybe 50 or 100," he said.

One of those contacts was Britney Spears’ cousin, and the shirt found its way to the pop star, who at that time was getting a lot of scrutiny over some rather public and rather eccentric behavior. After the People photo appeared, he experienced a surge of interest, and ended up selling the shirts to Britney-philes as far away as Ireland and Russia, he said. …CONTINUED

Other A-list and B-list types began showing up in the shirts or posing with them, to the point where Healy says he accumulated photos of about 120 of them on a wall of his office — football player Tony Romo, skater Michelle Kwan, Jessica Simpson, etc. 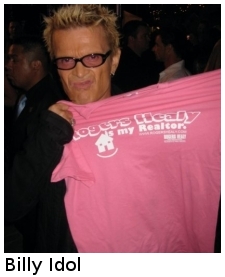 Many of the photos came from Healy’s encounters in airports. "I always carry a shirt with me when I travel," he says. "Most people don’t mind (posing), and I give them my business card."

And those young renters and first-time buyers are impressed by the office wall, he says.

His inspiration, he says, is his father, who constantly urged him, while growing up, to act on his dreams.

"I have so many ideas that I want to take advantage of and would hate to see somebody else doing," he says.

"I love real estate. I don’t think there’s another industry I could start over in and have the kind of impact I’m having at 29."