For Daniel Kraus, an Orthodox Jewish 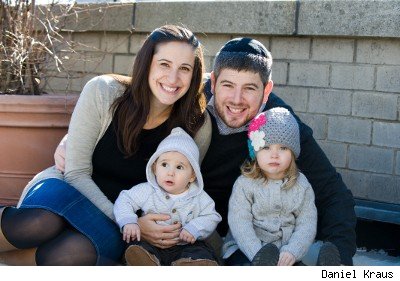 For Daniel Kraus, an Orthodox Jewish renter in Midtown Manhattan, a downed utility pole could put the kibosh on all his weekend plans — but not for the reasons you might think.

Kraus (pictured above with his family) was caught in "a flutter of email" last Friday, when it was discovered that a pole marking part of his community’s ritual boundary, known as an "eruv," was damaged.

The purpose of an eruv — a series of nearly invisible wires strung high above street level on utility poles and lampposts — is to create a symbolic home in which observant Jews are allowed to perform some tasks that are otherwise prohibited on Shabbat, the time between sundown Friday and Saturday evening. Chief among these privileges: carrying items (like walking canes and keys) and moving objects (like baby strollers and wheelchairs).

As a director of the Manhattan Jewish Experience, a community of young Jewish professionals in Gramercy/Murray Hill, and the father of two small children, the prospect of the eruv (pronounced "ay-roov") being damaged was more than a little inconvenient, he says with some understatement.

"We were hosting 50 people for lunch in our loft space," Kraus recalls. "How am I going to get the kids from the house into the loft?"

It took a phone call to New York Mayor Michael Bloomberg, Kraus says, but his congregation was able in the 11th hour to get the repairs in time for Shabbat. As should be amply clear, he says, "it has a very practical use every week."

Yet for something so vital to the Orthodox Jewish community, eruvin remain largely unknown to other groups, including some non-observant Jews.

"Aesthetically, it’s just a tiny little string that you don’t see unless you’re at eye level, 15 to 20 feet up," says Julie Friedman, a Realtor who covers the Gramercy/Murray Hill area. She leased Kraus his apartment in 2007. 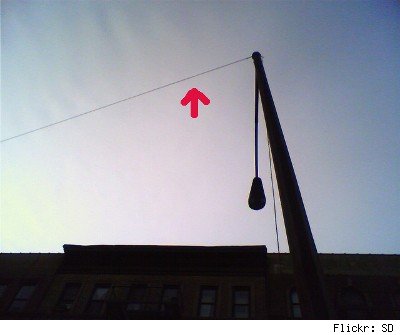 While an eruv may be composed of no more than fishing wire and lampposts (pictured above), the intrinsic value that the enclosure adds to a property is immense for Orthodox Jews. "Consider it a commodity" for the observant, she says.

But as for adding any monetary value to real estate, New York appraiser Alice Palmisano isn’t so sure.

"It’s a little esoteric for the general population," Palmisano says. In her 27 years working in real estate, she has never heard of an eruv. And as with all niche amenities, she adds, "It would only contribute value to those who value it."

More to the point, a Realtor could be penalized for advertising the religious enclosure under the Fair Housing Act, she points out. Marketing such a feature could be construed as discriminating against non-Jewish groups.

Is an eruv legal?

Many renters and homeowners might be surprised to discover that their own property is located within these sanctified spaces — and only the most eagle-eyed among them might spot the wire boundaries.

But it’s not their appearance that has some groups up in arms. In Tenafly, N.J., where an eruv was erected more than a decade ago, the controversy has splintered into quarrels over First Amendment rights and religious imagery in public. From there, assertions of prejudice were not far behind. A 2002 lawsuit claims that some residents were concerned that the eruv would "attract more Orthodox Jews to the area."

"It makes no sense (to argue about it)," says Rabbi Menachem Genack, who belongs to a synagogue in nearby Englewood, N.J., which has a long history of eruvin. "Why is it disruptive? Can you see it? No."

Ultimately the courts upheld the synagogue’s right to erect an eruv, but other controversies continue to break out in other communities. Notably, "The Daily Show" spoofed a recent eruv dispute in Westhampton Beach, N.Y., for similar issues of perceived prejudice. (See the show’s send-up of the dispute below.)

While controversies over eruvin erupt for several complicated reasons, the bottom line for real estate professionals — and, in turn, home shoppers — is that considerations must be made for all clients, regardless of creed, race or a laundry list of other protected classes under the Fair Housing Act.

Even Friedman, who serves a large number of Orthodox Jewish home shoppers, says that she does not broach the topic unless the client makes the first move.

Agents would do well to be even more stringent, says Palmisano, who is also a licensed broker. The rules can be so strict, in fact, that she says agents can get in trouble for even mentioning the terms "bachelor pad" or "family home," as those could be called out as an exclusion to other groups.

The reality, though, from Friedman’s perspective, is that the inclusion of an eruv is in the same category of convenience as proximity to a train station. It’s just a matter of providing a service for one group of shoppers, without committing a disservice to others.

"And if they ask if there are Jews who live in the building," she adds, "we just smile and say, ‘This is New York City’ — everything is reflected here."

EDITOR’S NOTE: In response to some commenters’ questions on the maintenance costs of eruvin, it is the responsibility of the particular Jewish community — not taxpayers — to finance the project.