With Blagojevich’s sentencing (he’s expected to get 10 years, though he’s eligible for a far longer term) likely later this fall, his wife, Patti, a real estate broker, officially listed the home through her own River Realty firm on Oct. 2, instantly garnering a blast of local publicity that could make a real estate agent swoon.

"It’s not just a house that we’re selling, it’s our home," Patti told reporters. "It’s the only home that our children have known. It’s kind of sad."

The home became the de facto governor’s office after Blagojevich took office in 2003, generally eschewing offices in the state capital and the official Governor’s Mansion in downstate Springfield.

In an interview with Inman News, Patti Blagojevich described the house as having 3,800 square feet of finished space and a 2,200-square-foot unfinished basement, making it one of the largest in their leafy, affluent neighborhood on the city’s North Side.

"It has five bedrooms, in addition to a large first-floor family room, and four baths," she said. "We redid the kitchen when we moved in in 1999. We were judicious with our finishes — it was when stainless was just coming on the market, and we have that, and a Viking range, a Thermador hood, and nice granite."

Listing photos, which made all the local news broadcasts when the sale became official, depict a Spanish-styled home with large public rooms that feature stained and leaded glass windows and doors, beamed ceilings, and French doors. A red-walled library is filled with floor-to-ceiling bookshelves.

Area real estate agents pronounced the $1.07 million listing at least somewhat overpriced and suggested that the state’s former first lady would fare better by having somebody else handle the sale.

"I might have gone $999,000 as a listing price," said Prudential Rubloff Properties agent Eric Rojas, who lives in an adjoining neighborhood. "It’s a really beautiful home, but it’s not that historic and the finish level is not that great.

"And as a real estate broker, I wouldn’t have listed the house myself, especially in their situation," he said. "When I sold my own home, I was the listing agent but my partner did the showings. I never talked to the buyers, and I think it should be more arm’s-length."

Some other real estate professionals interviewed for this article concurred. "I think she’s making rookie mistakes (in judgment)," said Pamela Ball, a longtime agent with Baird & Warner who lives in a nearby neighborhood.

Blagojevich is not a rookie — she said she has been licensed for more than 20 years. However, witnesses at the first of her husband’s two trials raised questions about the amount of work she performed, suggesting that she was mostly a "ghost-payroller" at the development firm headed by convicted political fundraiser Antonin Rezko, according to Chicago Tribune reports.

Witnesses also suggested that Rezko funneled tens of thousands of dollars to her, though the Blagojevich defense team countered that she worked for all of her commissions.

Ball said that in her professional opinion, "You never (price a home) $70,000 over $1 million. You always go under because there are people who look for homes up to $1 million but would think they could never afford the Blagojevich house."

Ball also said the homeowner-agent probably shouldn’t have told reporters that the house’s poured-concrete construction made it a "fortress" that could withstand a tornado.

"You should be selling the sizzle, and there is no sizzle to ‘tornado,’ " Ball said.

She also suggested it would be preferable to handle the sale outside of the family.

"She needs to have someone in between herself and the home inspector. You need that buffer. And if it’s priced wrong, the amount of money she’s going to have to take off in her price reduction would have paid the agent," Ball said.

But Blagojevich defended the self-listing, saying she’d handled her own sales in the past. And, in the family’s current circumstances, the commission matters a lot, she said.

"I’ve had my license for over 20 years, and every home that we’ve bought and sold, I’ve been the Realtor for myself," she said. "What’s the point of having a real estate license, especially in this market and when you’re not doing many deals? The least you can do is get your own commission.

"If times were different, I would give it to (another) Realtor to do," she said. "But nobody knows the home better than I do."

Suzy Thomas, an agent for Dream Town Realty, lives around the corner from the couple, and has logged considerable Blagojevich media time after being set upon by reporters and photographers because she happened to be walking her dog by the house on the morning in December 2008 when federal agents woke up the governor and arrested him.

And later, news cameras captured and broadcast the moment when, after he had been indicted and was returning home, Thomas offered him a neighborly hug as he approached his house.

"My friends teased me for hugging him," she said. "The guy had had a bad day, what can I say?’

Thomas said she understands the financial urgency of the Blagojevich’s for-sale-by-owner approach.

"How else do you save money?" she said. "I guess every penny counts."

But Thomas said that even though she has represented herself in the listing of her own home in the past, "it’s a very difficult thing to do.

"I have paid other Realtors to show it for me," she said. "It’s difficult not only for you as the owner-listing agent but also for the buyer, because it puts them in a difficult position — it can be awkward to ask questions about the house."

Negotiations will be a further complication, Thomas said.

"I always find in the transaction there’s a lot of emotion, and a big role that Realtors play is being the go-between to remove the emotions in the transaction," Thomas said. "It’s always bad for buyers and sellers to talk directly. Things can erupt, deals can fall apart."

Whether being "the Blagojevich house" is a plus or minus is debatable, the agents said.

"I think it’s sort of a stigmatized home, and I’m not sure if (their ownership) is going to help them or hurt them," said Rojas, who said the house has negatives on a more elemental level.

"What’s probably going to hurt them is that they have one garage spot and they have a galley kitchen — some of the other homes (that have sold in the area) have had much larger, nicer kitchens," he said.

Thomas didn’t think the name connection was a particular drawback.

"I don’t know that it’s as stigmatized as when you have something really traumatic, like a murder, in the house," Thomas said. "My gut says it’s 50-50 — some may want to stay away from it, but just as many will be attracted to the celebrity of it."

Blagojevich herself said she’s unsure how that angle will play out. To ward off curiosity-seekers, the listing specifies that potential buyers must be prequalified for financing, and she won’t hold any open houses; she said she had conducted a couple of showings.

"It could go either way, I guess," she said. "We could have moved to the Governor’s Mansion (in downstate Springfield) and lived in a 50,000-square-foot mansion with a butler and chefs and the whole deal, but we chose to stay in our home and particularly in this neighborhood — that says a lot about the house, I think.

"Most people would have taken the mansion," she said, laughing. 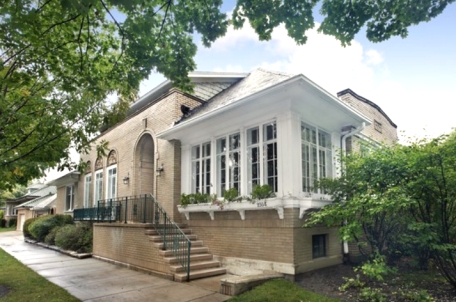 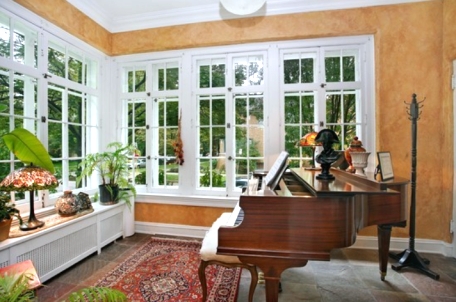