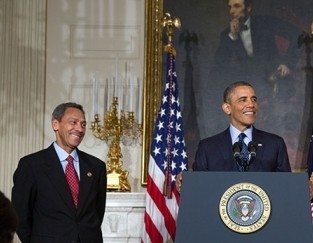 Realtors, mortgage lenders and builders cheered when Mel Watt, the incoming overseer of Fannie Mae and Freddie Mac, played Santa just before Christmas and delayed a package of loan fee increases that would have made buying a home more expensive in 2014, even for people with great credit.

Watt, a North Carolina Democratic congressman since 1993 and a former chairman of the Congressional Black Caucus, is scheduled to be sworn in as director of the Federal Housing Finance Agency Jan. 6. He’ll replace Acting Director Ed DeMarco, who sought to raise loan fees as part of his effort to shrink Fannie and Freddie’s role in the marketplace.

Watt said he needed time as new director to evaluate the impact of the fee increases, which DeMarco had envisioned taking effect this spring, before lenders began pricing them into their 2014 rate quotes to mortgage applicants.

But is there any real chance that, after studying the matter, Watt will actually go along with DeMarco’s planned fee hikes? For that matter, what are the chances that he’ll stick with any of DeMarco’s strategies regarding the proper roles of Fannie and Freddie under conservatorship?

How about near-zero, on both counts. During his Senate confirmation testimony, Watt pledged to adhere to the statutory dictates governing the FHFA director, to “foster liquid, efficient, competitive and resilient national financial markets.” That leaves him plenty of legal scope to install his own policies.

Here are some hints about how Watt is likely to handle Fannie and Freddie, and what that could mean for housing through the balance of the Obama administration.

Not only had they been highly critical of DeMarco’s plans, but Watt affirmed — boldly, before even taking office — the very views that caused them to support his nomination: He is openly, unabashedly and dependably pro-housing to the core.

Not just in favor of affordable housing for the middle- and upper-income borrowers with 770 FICO scores who had become the profitable mainstays of Fannie and Freddie under DeMarco, but pro-housing for more marginal homebuyers — the very people the mortgage giants were directed to serve under the HUD housing goals during the Clinton and Bush years.

So when Watt postponed the fee hikes, he was really saying: I am not going to make homeownership any more expensive or difficult to achieve than it already is. Forget these increases. They’re dead.

What else might be on his agenda? He’s not talking publicly. Nor are the White House domestic policy advisers, who’ll have greater leverage during his stewardship at FHFA than they ever had with DeMarco.

But a potentially useful guide to where FHFA may be headed is the detailed to-do list set out for Watt by the Center for American Progress, an influential voice on housing policy in Washington. The Center describes itself as a “nonpartisan institute,” but it has a distinct lean to the left and strong ties to both the Obama and the Clinton administrations.

Its founder and chairman, John Podesta, former chief of staff for Bill Clinton, was recently hired by Obama as a top White House counselor.

Podesta summed up his approach in a discussion with Politico: Given effective control of the House by extreme right-wing Republicans, he said, Obama should “focus on executive action” — pushing a progressive domestic agenda that requires no approval by Congress but has significant impacts.

With a liberal Democratic ally now running FHFA — the highest-impact player in the housing and mortgage marketplace — the agency is a perfect vehicle for advancing that type of strategy.

What’s on the Center for American Progress’ list for Watt? At the top: Restore Fannie and Freddie’s earlier “focus on working and middle income families” and jettison DeMarco’s “myopic focus on restoring the short-term (financial) health of Fannie Mae and Freddie Mac.” The latter approach may have helped produce billions in payments to the Treasury, but it “has harmed not only individual families but also the housing market as a whole.”

Next, “develop a principal reduction program to prevent foreclosures.” DeMarco’s refusal to allow principal forgiveness in connection with troubled loan workouts infuriated Democrats in Congress and community groups, and was a key reason why Obama brought in Watt. He’ll deliver the goods.

Also on the agenda:

None of this is to suggest that Watt is going to be a puppet on strings, taking orders from the White House, think tanks, or community groups. It’s just that these are items that have been part of the shared agendas of Obama, Watt and most Democrats in the House and Senate for years.

Keep in mind that Watt also has ties to Wall Street and the financial community — the banking industry has contributed generously to his congressional campaigns — so his door will be open to them. And also note his legal responsibilities under the 2008 law that will restrict his ability to return Fannie and Freddie to their former, more activist roles in promoting homeownership.

But you can bank on most of the above to be somewhere on Watt’s work plan for 2014. And that should be good for housing in the broadest sense.

Fannie, Freddie now giving homebuyers 20-day 'First Look' at REOs
Back to top
Keep up-to-date on tools and tactics to impress your clients and outshine your competition with the 2022 virtual bundle.Register Now×
Agent Appreciation Sale: Inman Select for only $85.CLAIM OFFER×
Inmanpot
Log in
If you created your account with Google or Facebook
Don't have an account?
Create an Account
Forgot your password?
No Problem