E-signature heavyweight DocuSign Inc. has raised $85 million that the company says it will put to use to expand beyond its core e-signature business and become a global provider of transaction management platforms for the real estate and other industries.

In addition to pouring resources into developing its digital transaction management platform, DocuSign will use the funds from the round to expand to markets outside the U.S. and Canada — where a majority of its clients reside — to Europe, Latin America and Asia.

The company, which is owned in part by the National Association of Realtors, will also deepen integration of its apps with Microsoft Office 365, Tom Gonser, DocuSign’s founder and chief strategy officer, told Inman News.

“Our latest round of financing positions us to help more customers around the world keep business digital with DocuSign as the catalyst for their digital transformations,” said Keith Krach, chairman and CEO of DocuSign, in a statement.

Digital transaction management “is a natural progression for us,” Gonser said.

As DocuSign grew in its core verticals of real estate, financial services, insurance and technology, it became apparent that clients were needing more than just e-signatures to complete transactions digitally, Gonser said.

Instead of building a system from scratch, DocuSign acquired real estate-focused transaction management platform Cartavi last May. Beginning this week, the Cartavi product offered by DocuSign will be known as “DocuSign Transaction Rooms.”

DocuSign released a broker-focused version earlier this year. Currently, the platform is tailored to real estate pros, but DocuSign plans to use a chunk of the cash from the funding round to adapt the platform to the other industries it serves, including its biggest sector, financial services, Gonser said.

E-signatures are just one part of a digital transaction, Gonser said. There are also people, documents and workflows — elements the firm will continue to build into the product for all the sectors it serves, he said.

With the latest round of funding, DocuSign has raised a total of $210 million, including a chunk from the National Association of Realtors. NAR took a 5.43 percent stake in the company with a $2 million investment in 2009 via its subsidiary Second Century Ventures.

Second Century Ventures acquired 2.26 million shares of stock in the deal, plus options to purchase an additional 1 million shares within the next five years for 88.3 cents per share. NAR CEO Dale Stinton joined DocuSign’s board of directors in 2013. NAR members receive discounts on DocuSign subscriptions.

Other investors in DocuSign include salesforce.com, Google Ventures, SAP Ventures and Sigma West.

The firm has its eye on an initial public offering, DocuSign Chief Financial Officer Mike Dinsdale told the Wall Street Journal in December. 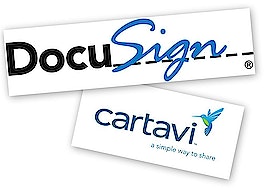 DocuSign soon to be available in Microsoft Office
Back to top
Only 3 days left to register for Inman Connect Las Vegas before prices go up! Don't miss the premier event for real estate pros.Register Now ×
Limited Time Offer: Get 1 year of Inman Select for $199SUBSCRIBE×
Inmanpot
Log in
If you created your account with Google or Facebook
Don't have an account?
Create an Account
Forgot your password?
No Problem