With the addition of four new markets in Tennessee and southwest Florida, Redfin is continuing an expansion push that brought it into more than a dozen new markets in 2014.

The Seattle-based brokerage and referral site, which raised $70.9 million in December that will help spur its growth, announced this week that it now powers listing searches and has agents in Nashville and Memphis in Tennessee and Naples and Fort Myers in southwest Florida.

Redfin is currently doing business in more than 50 markets and is looking for agents in dozens more, including Honolulu, Louisville (Kentucky), Maine and Vermont.

The timing for turning on those additional markets is determined by when the firm can both secure a multiple listing service data feed and hire a broker to represent the firm on the ground, Redfin spokeswoman Katy Klein told Inman.

Redfin’s expansion is slowly turning the firm into a true national brand. It currently has a presence in most regions of the country. 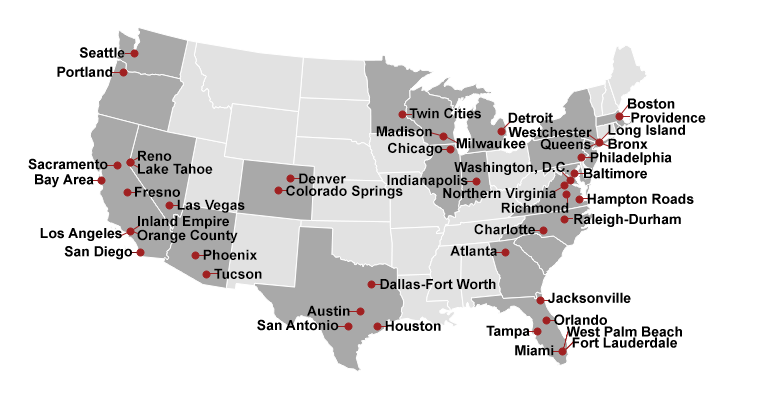 A recent Redfin map highlighting most markets where the brokerage now operates.

Redfin’s actively looking to open markets in states where it has yet to operate, including Louisiana, Missouri, New Mexico, Ohio, Oklahoma and Nebraska.