The volume of foreclosure filings reported in May was 16 percent higher than a year ago, according to RealtyTrac, and default notices, schedule auctions or bank repossessions (REOs) were reported on 126,868 U.S. properties, marking a 19-month high for filing volume.

The volume of foreclosure filings reported in May was 16 percent higher than a year ago, according to RealtyTrac, and default notices, schedule auctions or bank repossessions (REOs) were reported on 126,868 U.S. properties, marking a 19-month high for filing volume.

The increase in May was driven primarily by a jump in bank REOs, which totaled 44,892. This figure represents a 58 percent jump in REOs from a year ago.

“The number of homeowners actually losing their homes to foreclosure (is) still well above precrisis levels and on the rise,” said Daren Blomquist, vice president at RealtyTrac, in a statement. “Lenders and courts are pushing through stubborn foreclosure cases that have been languishing in foreclosure limbo for years as options to prevent foreclosure are exhausted or left untapped.”

Of the nation’s 50 states, 38 and the District of Columbia saw an increase in filings when comparing last month to May 2014:

Florida (22,008 filings) and California (12,024 fillings) accounted for nearly 27 percent of all foreclosure activity during May.

Driven by a 63 percent annual increase in REOs, overall foreclosure activity in Florida was up 7 percent from a year ago. The state’s foreclosure rate of 1 in every 409 housing units with a foreclosure filings is tops in the nation.

Other states with the highest foreclosure rates include: 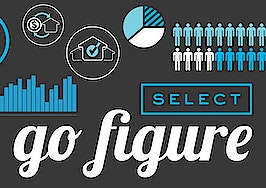 No housing bubble in sight -- for now
Back to top
Only 3 days left to register for Inman Connect Las Vegas before prices go up! Don't miss the premier event for real estate pros.Register Now ×
Limited Time Offer: Get 1 year of Inman Select for $199SUBSCRIBE×
Inmanpot
Log in
If you created your account with Google or Facebook
Don't have an account?
Create an Account
Forgot your password?
No Problem